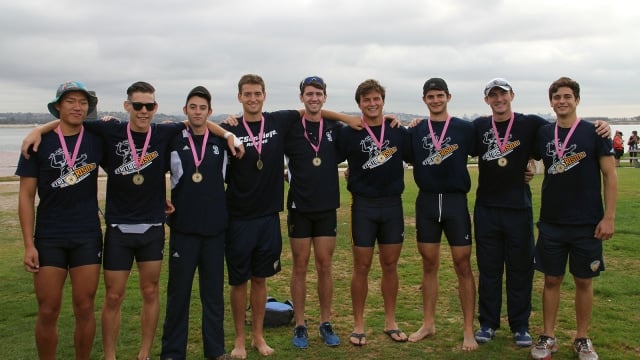 The UCSD men’s and women’s crew squads had a solid outing in Mission Bay this past Sunday at the 14th annual Row for the Cure, a charity regatta dedicated to raising funds for the fight against breast cancer.

For the UCSD crew program, the Row for the Cure event marks the start of the 2013–14 season. The Tritons hosted Loyola Marymount University, Orange Coast College, San Diego State University, UCLA and UCSD.

The UCSD men emerged victorious in both of their races for the day, taking first place in the Open 8 and the Open 4 in dominating fashion. The Tritons crossed the finish line for the Open 8 at 11:43. Second place Orange Coast College (11:51) followed eight seconds behind while the two UCLA boats placed in third and fourth, at 11:55 and 13:09, respectively.

“I’m just really proud of the guys,” UCSD head men’s coach Zach Johnson told the UCSD Athletics Department. “We have been working hard, and this was the first day with that lineup. They really stepped up and executed well.”

UCSD was able to make the podium for the Open 4 in similar fashion, finishing first in 12:57 with a comfortable seven second lead. Orange Coast again came in second (13:04) while UCLA finished at third (13:07).

“It was a great team effort today,” UCSD head women’s coach Colin Truex said. “All boats rowed very aggressively and attacked the race while at the same time maintaining their composure in the heat of competition.”

UCSD is not back in action until Nov. 9 when the team returns to Mission Bay for the annual San Diego Fall Classic, which will be the last time the Tritons will hit the water until March 2015. UCSD hopes to build on its successful outing last year at the Fall Classic, during which the men placed first in the Open 8+ and the Open Novice 8+.