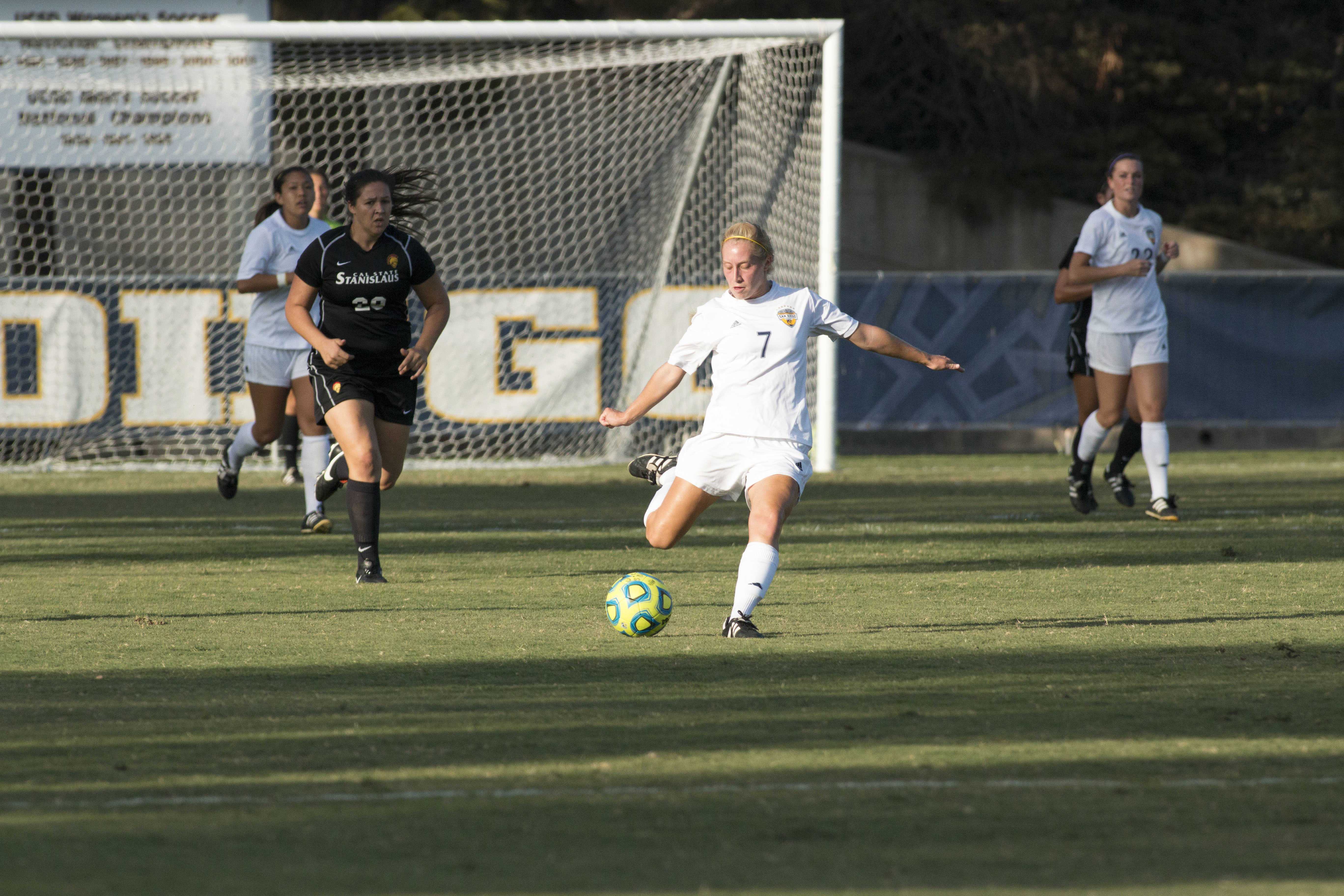 The UCSD women’s soccer team started a four-game road trip this past weekend with two games against California Collegiate Athletic Association foes. The Tritons ended the pair of matches with two consecutive shutouts: a 1–0 win at Cal State Monterey Bay on Friday and a 0–0 tie at San Francisco State on Sunday. UCSD moved to 6–5–3 overall and 3–3–2 in the CCAA.

It was a penalty kick in the 84th minute that helped the Tritons get past Cal State Monterey Bay on Friday. Senior midfielder Cassie Callahan notched the game-winning score for her fourth goal on the season, tied for the team high. Callahan now has 11 game-winning goals over her four-year career.

“Our issue this year is that we have a hard time scoring goals even though we have been playing well,” Callahan said. “In the second half, when a penalty kick was called for us, I knew immediately that I wanted to take it.”

That goal and the victory helped the Tritons leapfrog their opponents of the day in league standings to take sole possession of seventh place in the conference.

The Tritons dominated the first period with UCSD outshooting the Otters but failing to capitalize. Cal State Monterey Bay came back firing after the intermission, putting heavy pressure on junior goalie Kelcie Brodsky. However, Brodsky held her ground to deliver her second clean sheet of the year and improve her save total to a league-leading 61 on the season.

“The second half was a much tighter game,” UCSD head coach Brian McManus said. “The first half we dominated the game but couldn’t get the goal. Cassie Callahan stepped up. She is a leader of the team, and that’s what she does.”

The Tritons rode a two-game winning streak into Sunday’s game at San Francisco State. Brodsky had four saves in her second consecutive shutout, but UCSD ultimately came out with a scoreless tie as the 110 minutes played were not enough to separate the two teams.

“We were playing really well, connecting really well,” Callahan said. “We didn’t really have that closure inside their box. We got really, really solid chances that should have been goals. We were just unlucky.”

UCSD outshot San Francisco State 16–7 while kicking eight corners to the Otters’ zero. Even in overtime when the Tritons tried to force the outcome of the game, San Francisco State’s Allison Land got the best of Callahan and her teammates.

“The game on Sunday was completely dominated,” McManus said. “Again [it was] a little bit of lack of luck in the box. The players were disappointed in themselves not finishing it.”

With the win and tie on the weekend, the Tritons sit in seventh place in the CCAA, currently just shy of postseason contention, as only the top six squads qualify for the conference championships. With every game on the line, the Tritons will look to climb the rankings when they travel to No. 8 Sonoma State next Friday before moving on to Humboldt State on Sunday.