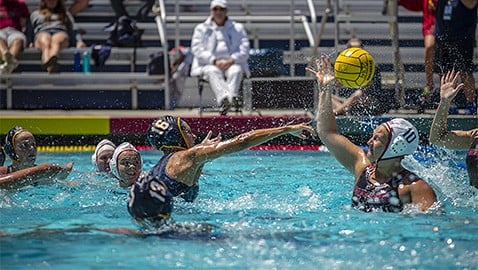 No. 12 UCSD defeated Pomona–Pitzer 13–9 in NCAA play-in game this past Saturday at home, earning a spot in the NCAA finals bracket this Friday at USC’s Uytengsu Aquatics Center.

The No. 12 nationally ranked UCSD women’s water polo team began its NCAA championship journey this past Saturday, May 3, defeating Pomona-Pitzer College 13–9 in an NCAA play-in game on home turf at the Canyonview Aquatics Center. With the victory, the No. 7 seeded Tritons advance into the finals bracket that includes the nation’s top eight teams and will face No. 2 seed UCLA in the next round.

Saturday afternoon’s game was a tense thriller, as the Tritons held on to a slim lead throughout the entire contest against a persistent Sagehen squad.

“[The match] was tough-fought,” UCSD head coach Brad Kreutzkamp said. “Pomona certainly came ready, and I thought they outplayed us quite a bit. Fortunately, I think our depth and speed carried us through.”

Goals from senior utility Sarah Lizotte and sophomore 2MD Alexis Wieseler opened the scoring and gave the Tritons an early 2–0 edge. Pomona-Pitzer would rebuttal with a score, but UCSD retained a 2–1 advantage at the end of the quarter.

“I think we came out flat,” Kreutzkamp said. “There were a couple shots that we should’ve made early in the game that really would’ve set the tempo.”

In the second period, the Tritons and the Sagehens seemed to exchange goals back and forth with every possession. With every goal the Tritons netted to extend their lead, the Sagehens returned with a score to tighten the advantage back up. Both groups tallied 10 goals in total as UCSD held on to a slim 7–6 lead at halftime.

“I thought we got really excited,” Kreutzkamp said. “We really tuned it up. You score five goals in a quarter — usually you pretty much set yourself up for a win. However, Pomona, you got to give them all the credit — never quit. They kept coming back at us.”

After receiving two kick-out penalties, Lizotte was forced to sit for the entire third quarter to avoid a third foul and consequent ejection.

“It’s hard watching your team play while you feel like you can’t be a part of it,” Lizotte said. “It’s difficult in any sense. I obviously wanted to help them and be a part of that experience, but it’s part of the game.”

In spite of Lizotte’s temporary absence, the Tritons managed to fare well, as the second half began with a sniper shot landing in the back of the cage from sophomore attacker Julia Kirkland to put UCSD up by two. The Tritons and Sagehens each scored once more in the third period to put the score at 9–7 entering the final frame.

With the match tightly contested throughout, UCSD finally pulled away in the fourth quarter, going on a 4–1 run to seal the victory at 13–9.

Lizotte finished the match with a team-high four goals, while Wieseler and Kirkland recorded a hat trick apiece. With the win, the Tritons are now on a ten-game winning streak and look to continue their impressive play going into their third NCAA finals in the last four seasons.

“I don’t think, as a whole, we played a really good game,” Lizotte said. “There were a lot of mistakes — a lot of individual mistakes and a lot of team defensive mistakes. [But] it’s just going to prepare us for NCAAs come Friday.”

UCSD now looks ahead to second-seeded UCLA, who finished with a 26–3 record overall this season and are the No. 2 team in the nation. While the Tritons understand the tough challenge ahead, they will approach the upcoming match with poise, having come close to defeating the Bruins in an 8–6 loss on Feb. 22.

“It’s a team we only lost to by two goals earlier in the year,” Kreutzkamp said. “They’ve been playing amazing ball lately, so we’re going to really have to come up with our best game of the year by far to be able to stay in this game.”

The Tritons will face off against the Bruins next Friday, May 9, at the University of Southern California’s Uytengsu Aquatics Center. If UCSD advances, it will continue to play in the winner’s bracket through the weekend, with the championship match scheduled for Sunday night. Friday’s match will begin at 3 p.m.

“They’re certainly going to be favored ahead of us,” Kreutzkamp said. “It’s going to take a big upset for us [to win], but it’s not impossible. We’re going to come in with the attitude that nothing’s impossible and that we can give them a game. If things go our way, I think we can get a win.”