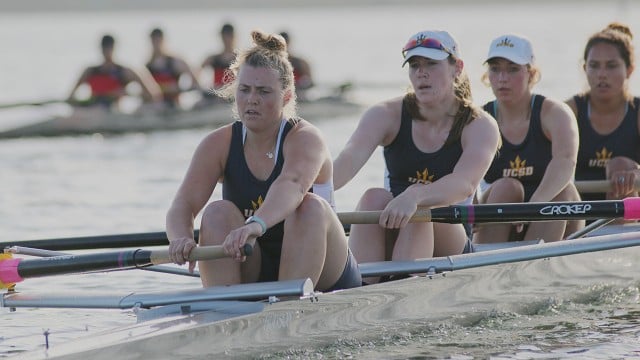 All three boats advance to Grand Finals at WIRAs for first time in UCSD history and face tough competition.

In Saturday’s qualifying rounds, UCSD snagged second place in the Varsity 8 heat, posting a time of 7 minutes, 12.70 seconds, a mere third of a second ahead of UC Davis. Humboldt State came in first, winning by 12 seconds.

In the Varsity 4 race, the Tritons once again finished second in 8:05.30, five seconds behind No. 4 Humboldt State and three seconds ahead of third place Seattle Pacific University. UCSD’s Novice 8 finished third with 7:38.70, marking the first time in school history in which all three boats earned spots in the Grand Finals.

“It was a great team performance,” head coach Colin Truex told the UCSD Athletics Department. “Getting every boat into the Grand Finals is something we can all be proud of and we’ll be going for some hardware tomorrow.” However, the Tritons were unable to repeat their impressive finishes on Sunday as UCSD team came up short against multiple nationally ranked opponents. In the Varsity 8 Grand Final, UCSD crossed the finish line fourth, finishing in 7:13.10, nearly 21 seconds behind No. 4 Humboldt State.

The Varsity 4 was able to make the podium, placing third with a time of 7:59.95, coming up short behind Humboldt State.

In the second Varsity 8 Grand Final, UCSD finished with similar results to those of the first heat, placing fourth and finishing in 7:22.52, over nine seconds slower than the first race. UCSD finished in sixth place the Novice 8 with a time of 7:00.03.

“Overall, it was a solid day for the team,” Truex said. “Having all boats competing in [the] Grand Finals was a first for us.”

The Tritons will now travel across the country for the Aberdeen Dad Vail Regatta in Philadelphia, Pennsylvania, which will take place from May 9 to 10. The event will mark the Tritons’ final regular season meet before they travel to Indianapolis for the NCAA Championships at the end of the month.

“We are still looking to find our top speed,” Truex said. “We need to buckle down over the next 10 days before heading to the East Coast.”

One thought on “Tritons Make History, Struggle at WIRA Races”