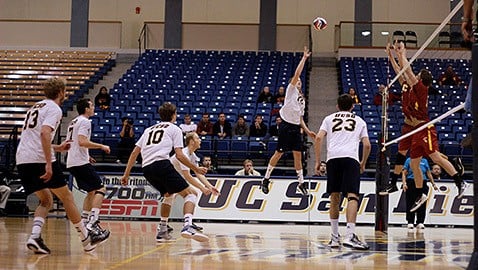 The UCSD men’s volleyball team lost to the University of Hawaii in Honolulu on Friday night, 3–0.

The Tritons have now lost all five of their matches in the Mountain Pacific Sports Federation conference, and with Friday’s result, UCSD falls to 0–6 overall and 0–5 in the MPSF.

Ranked No. 10 nationally, Hawaii appeared on paper as the conference’s easiest opponent for the Tritons relative to No. 5 USC, No. 6 Pepperdine and No. 8 BYU, yet the Rainbow Warriors proved tough on the court.

In the first set, both teams went point for point, leading to a 15–15 score before the Rainbow Warriors pulled away, tallying 11 of the next 14 points and never looked back. Hawaii led early in the second set, earning a three-point lead that was eventually extended to 15–7. UCSD lost the set 25–15.

In the third set, the Tritons led for the first time in the match, 3–2 but failed to hold on to the advantage, as Hawaii managed a 25–21 set three victory to complete the match sweep.

“It’s the beginning of the season, and we’ve got a young team,” senior outside hitter Nick Iorfino said. “We are doing some things fairly well, and some things, not so good. Against Hawaii, we had a good defense. It helped keep the ball in play and gave us opportunity to score points, but our offense could need some improvement. I think we can make it happen.”

On Sunday, the Tritons lost to Hawaii 25–14, 25–16 and 25–22 across three sets, a repeat of the Rainbow Warriors’ sweep from Friday. Hawaii opened the first set with hitting over .500 and picked up 13 kills. UCSD was credited with six service errors.

The second set proved equally as frustrating for the struggling Tritons — Hawaii started the set with five unanswered points by Taylor Averill. The Tritons’ first lead of the night came when UCSD scored the first point in the third and final set. The set had seven lead changes, and Iorfino tacked up 12 kills to give the Tritons a chance to stay in the match. Even with the improved effort in the third set, UCSD fell to the Rainbow Warriors and returned to San Diego — still without a win — early Monday morning.
UCSD will return to action on Thursday night at RIMAC Arena against No. 3 UCLA (5–1 overall, 2–0 MPSF), starting at 7 p.m.