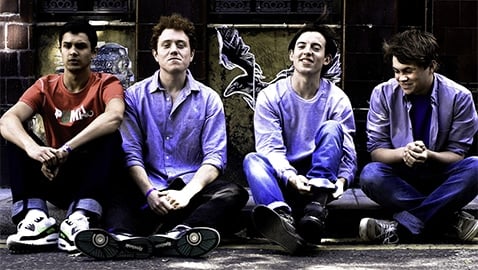 We music listeners are in a love affair with the shuffle button. There are only so many times we can listen to one song after another by the same musician. It’s too monotonous. We want variation.

But every once in awhile, an album comes along that forces you to listen to each track in the order listed on the liner notes. London-based Bombay Bicycle Club’s fourth, full-length record, “So Long, See You Tomorrow,” is one, even for impatient audiophiles who are inclined to press forward to tune in to something new, the album is worth listening to, exactly as the band intended.

“So Long” was partly inspired by the work of the 19th century photographer Eadweard Muybridge, known for creating one of the motion pictures, composed of seamlessly blended stills of a galloping horse. This cohesion is exactly what Bombay Bicycle Club has succeeded in doing with their new LP, albeit in musical form, with each track segueing smoothly into the next.

Of course, there are some potential pitfalls involved in crafting such an ambitious album — for one, the tracks could have sounded like sonic clones of one another. But “So Long” has plenty of eclecticism to spare, filled with everything from jingling, Christmas-like choruses in “It’s Alright Now,” to the quirky inclusion of Bollywood samples on “Feel.” Adding diversity to this already rich repertoire, recent single “Luna” proves to undoubtedly be a maturation from the band’s 2012 gentle electronica hit, “How Can You Swallow So Much Sleep.” The song’s ethereal dream pop melody and elegant synth beats perfectly complement frontman Jack Steadman’s Sufjan Stevens-like tenor and up-and-coming singer-songwriter Rae Morris’s Eisley-esque vocals.

After dodging so many possible complications with “So Long,” Bombay Bicycle Club has created a masterful tour de force that will satisfy even the most restless, shuffle-happy music listeners. If anything, listeners will make a habit of pressing the repeat button, cycling through the album’s 10 tracks over and over again.

2 thoughts on “Album Review: “So Long, See You Tomorrow” by Bombay Bicycle Club”