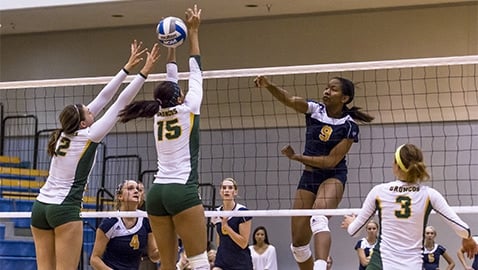 With eight consecutive wins in the California Collegiate Athletic Association, UCSD seems to be peaking as they head into playoffs. Last Friday, the Tritons took down Cal State Monterey Bay in five sets before beating Cal State East Bay in four.
With the weekend wins the Tritons improve to 23–3 overall and 16–3 in conference play — holding on to second place at two games behind CCAA leader Cal State San Bernardino.

For the second time this season, UCSD took the court against Cal State Monterey Bay, this time at the Kelp Bed. The Tritons struggled in the first two sets and found themselves on the verge of being swept, but they rallied to win the next three sets. The match featured 45 tie scores and 19 total lead changes.

“We really pulled off a great win against a good team,” UCSD head coach Ricci Luyties said to the UCSD Athletics Department. “I was very impressed with our ability to not give in and keep playing hard when things weren’t going well. Everyone made big plays during crunch time.”

Junior middle blocker Sara McCutchan was named this week’s the CCAA Player of the Week.

After going perfect — 11 kills on 0 errors — the middle blocker was named the CCAA women’s volleyball player of the week. McCutchan was also integral to UCSD this weekend, finishing with 27 kills.

Three other Tritons collected over 25 kills this weekend; junior opposite Caitlin Brenton (39) and sophomore outside hitters Danielle Dahle (30) and Sophie Rowe (26).

Libero Brittany Lombardi led the UCSD defense by saving a total of 46 digs this weekend.

UCSD hosts CCAA league leading and No. 14 nationally ranked Cal State San Bernardino this Wednesday, Nov. 20. This Friday, the Tritons head back out on the road to take on Cal State Los Angeles.