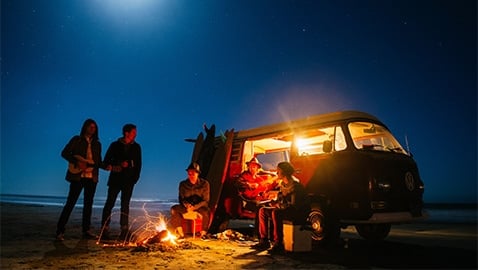 Few Tritons seem to know that the founding members of rock band Switchfoot grew up going to concerts at Che Cafe, attending classes at UCSD and teaching surf classes with the Rec Center. That was 15 years ago, though, and since then, Switchfoot has seen a long and successful rock career. Though the band’s musical style has long been typical of 2000s alt rock, its new EP and upcoming album (both called “Fading West”) are taking a step in another direction. This evolution took place as the result of recent experiences, which were documented in a new two-hour documentary, titled “Fading West” as well.

The film “Fading West” is being shown at the openings of Switchfoot’s performances, and it documents the band’s adventures in Oceania while on tour. The members of Switchfoot are lifelong surfers, and in addition to music, much of the film focuses on riding gorgeous surf breaks in less-traveled parts of the world in an “Endless Summer” sort of way. However, due to a family emergency, the film also ended up exploring the close ties between the band members.

“Well, we set out to go around the world chasing waves and chasing songs, and yet, I don’t think that we anticipated how personal the movie would get,” drummer and co-founder Chad Butler said. “I think people will be surprised at how it’s more than just a surf film or a music documentary, but it’s a look inside our personal lives and our family lives and how we try to balance that with being in a rock band.”

From listening to “Ba55” off of Switchfoot’s new EP, much of the densely layered rock guitar backgrounds are gone. The typical pop rock chord changes are replaced with a steady one-chord bass groove and textural percussive sound effects. This isn’t to say that the song plays like a dreamy raga though — in fact, Eastern-influenced sound paves the way for some intense lyrics (“I believe you’re the fire that can burn me clean” is just one example) and a buzzing guitar solo.

The songs all sound more stripped in their production, which Butler attributes to a different writing approach in their new music.

“One thing we did intentionally was to hold off on electric guitars until the very end of the recording process and then building up the rhythm section with bass and drums and vocals,”  Butler said. “I think that approach was like tying your hands behind your back and forcing you to create in a different style, and I think as an artist that’s what you’re always trying to do is to break out of your old habits and to find new ways to create.”

The other two tracks on the EP are somewhat more conventional than “Ba55,” implying that the full album in January will find a happy medium between the two styles. And despite the fact that this and other albums were heavily inspired by surfing, there are no traces of what a listener would normally identify as surf music.

“Well, I’ve never been a fan of surf music to be honest. For us, surfing is more in our blood and music is a parallel to that, but I wouldn’t call our music ‘surf music,’” Butler said. “It’s just that surfing and music go hand and hand with each other growing up in San Diego.”

When Butler was still surfing at Blacks Beach, he was going to class at UCSD and studying biology, while Switchfoot’s early days were just a side project.

“While I was at UCSD I think I was hesitant to lean all the way into music even though I loved it so much,” Butler said. “I think I felt torn between a responsibility to a more traditional career choice with my bio major, and yet I ended up a professional musician. Looking back at it, I wish I would have followed my passion for music a little bit more and taken advantage of the incredible music department there. So if I had to do it all over again, I would have been a music major.”

Switchfoot is going to be playing a show on Nov. 5 at Balboa Theater, which is going to feature their film and new EP as well as some of their older songs. Though many have heard “Meant to Live” and “Dare You To Move” on the radio, the film still hasn’t been released commercially, and concertgoers will be among the first to see it since its debut a month ago. It’s hard to know what to expect from an international hit band that started off writing a song complaining how boring they found Chem 6A.

One thought on “Playing Switchfoot”