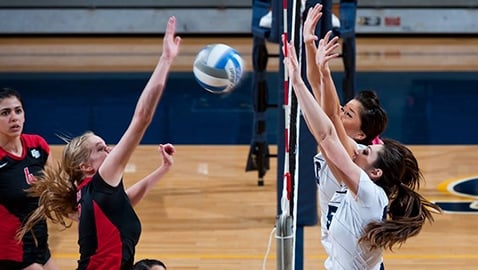 “It’s hard to say that I’m not disappointed,” UCSD head coach Ricci Luyties said of the weekend. “But for every match we play, we get better, so we just have to keep going”.

On Friday, the Tritons traveled to Carson, Calif. to battle conference opponent Cal State Dominguez Hills. The Tritons played consistently and were dominant on the attack in the match, which ended 3–1.

“It was a pretty good game,” Luyties said. “Everyone played well, and we had a good hitting percentage.”

The win was the 45th for UCSD in the all-time series. The Toros have won just twice, first in 1992 and not again until last season.

With a solid home crowd to cheer them on, the Tritons were ready Saturday to take on the Golden Eagles at RIMAC Arena.

Cal State Los Angeles came out strong to win the first set with efficient back-row attacks and solid blocking, but UCSD answered the call in the next set with impressive digs and good hitting, winning 25–17. Both of the teams battled each other during the next two sets, alternating wins until the fifth game.

The Tritons had the better start in the fifth set, pressuring the Eagles’ serve-receive game. Leading the whole set until CSULA tied the game at 13–13, the Tritons battled for match point back and forth with the Eagles.

Victory slipped through UCSD’s fingers when the Golden Eagles stole three consecutive points for the win after trailing 19–20. Both teams fought in impressive rallies with only small margins deciding the winner.

“That was pretty crazy,” sophomore outside hitter Sophie Rowe said following the fifth set. “My team fought really hard at the end of this set. These games can go either way. Everyone on our side played really well; we were fired up and into it. Unfortunately, it didn’t go our way tonight, but I’m really proud of my team.”

Rowe stayed aggressive down the stretch and shined throughout the last games, recording 21.5 points, seven digs and a pair of blocks. Together with sophomore outside hitter Danielle Dahle, Rowe led the team this weekend with 30 and 34 kills, respectively.

Sophomore setter Heidi Sierks also had a great weekend, with 105 assists and 32 digs for the Tritons. Senior libero Brittany Lombardi led the defense with 47 digs.

UCSD is back in action next weekend, hosting Sonoma State on Friday, Oct. 25, and San Francisco State on Saturday, Oct. 26 to open the second half of the CCAA season.