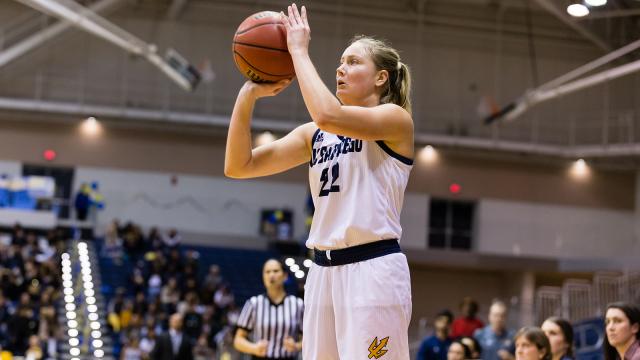 The match against East Bay started off tight. By the end of the first quarter, the Tritons trailed the Pioneers 11–13. However, in the second quarter, UCSD seemed to find their groove. The team played solid complementary basketball in the second quarter, scoring 19 points while limiting East Bay to just 9 points. A three-pointer by sophomore guard Brianna Claros early in the second quarter put the Tritons on top. UCSD would hold onto that lead until the end of the game. Claros was the key player in this game. She put together a team-high 20 points, 3 assists, and 7 rebounds. Junior guard Tyla Turner also had a nice night, recording 14 points, 4 assists, and 6 rebounds.

Unlike the game against East Bay, UCSD was the clear favorite in its match against Monterey Bay. Early in the season when these two teams first met, Monterey Bay upset UCSD 58–59. That was not the case last week. The Tritons got up early in this game and never relinquished their lead. By halftime, UCSD had scored more than twice as many points as their opponents, closing the second quarter up 44–20. The Tritons continued to steamroll Monterey Bay to a final score of 73–41. The Triton’s leading scorer, sophomore guard Julia Macabuhay showed out in the blowout, racking up 22 points — 9 from outside the arc, 2 assists, and 2 rebounds. UCSD also got solid contributions from senior guard Sydney Sharp and junior forward Isabelle Parker.

Next week, the UCSD team remains on the road, closing out the regular season with a match against No. 2 California State University, San Marcos. The season finale will determine who will be crowned the No. 1 ranked CCAA team. With last week’s wins, the Tritons (18–3) have one more win than the Cougars (17–4). At worst, if UCSD loses this game, it will share the first place with San Marcos; a win would give the Tritons sole ownership of the title. Tipoff for Saturday’s game is at 1 p.m.