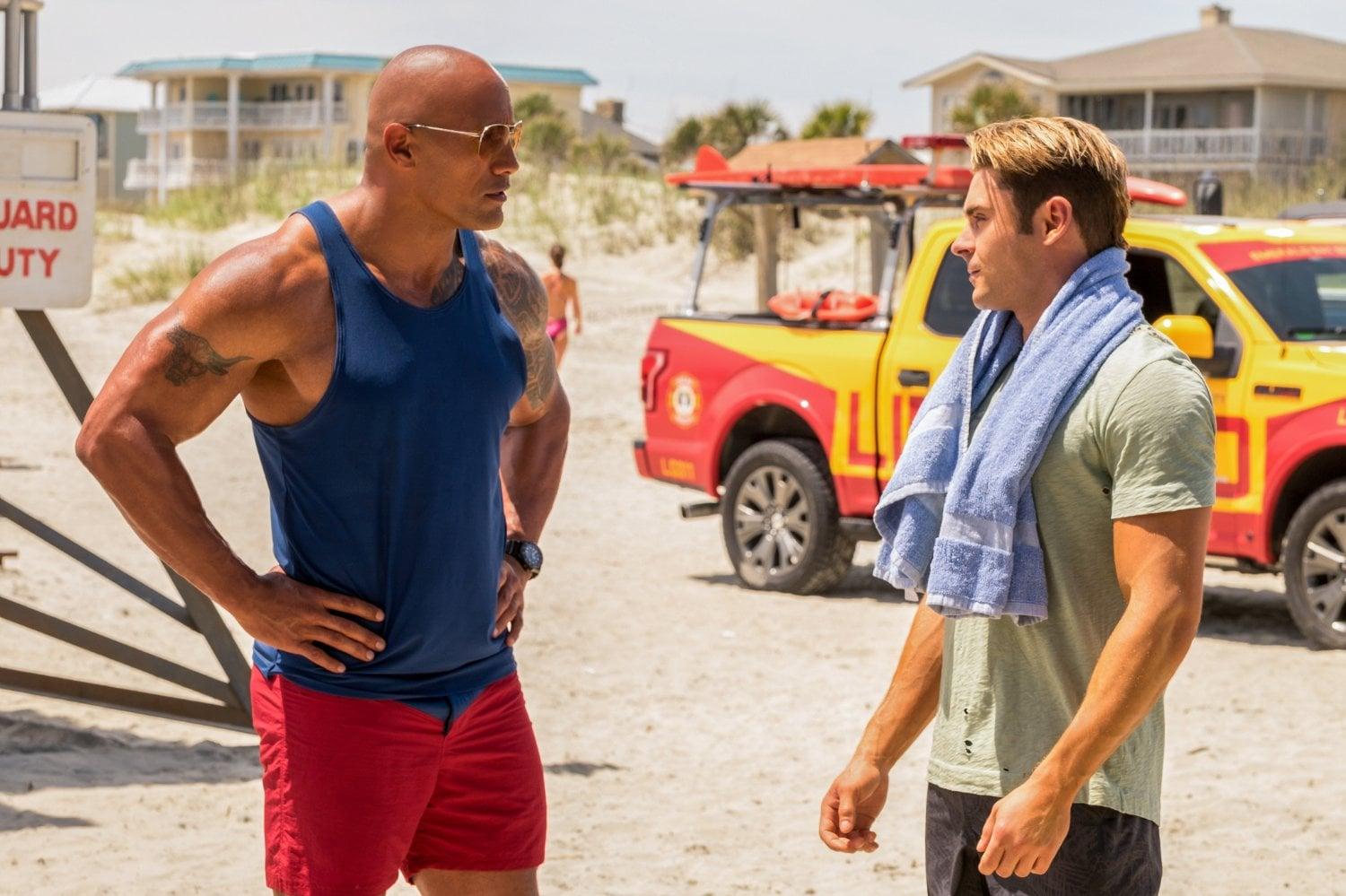 Seth Gordon (“Horrible Bosses”) has resuscitated the long-expired hit TV series “Baywatch.” Unfortunately, neither he nor anyone on his team is able to breathe new life into this shallow summer blockbuster. Sensational images of tanned supermodels running the beaches in skin-tight, spandex swimwear will please the unashamed fans of stylized sex. For those looking for more than eye candy and crude penis jokes, drowning in the bay may be a better use of time.

Lt. Mitch (Dwayne Johnson), a grown-up boy scout trapped in the body of a steroid-pumping WWE wrestler, leads the Baywatch Team. They handle everything typical lifeguards do — drowning, shark attacks, exploding luxury yachts — plus they operate as Emerald Bay’s invisible police force. After conspicuously recovering drugs washed ashore from the tide, Baywatch initiates an investigation into the drug-smuggling operation run by the charming real-estate tycoon, Victoria Leeds (Priyanka Chopra). It’s lifeguards gone “Miami Vice,” which sounds a lot cooler conceptually than it is. The protagonists substitute bulletproof vests for spandex, the jokes only land a quarter of their punches and the run-time is unnecessarily drawn out.

The withered narrative frame fails to deliver much excitement, mostly because its sequential repetition stunts any development of tension. The film redundantly retreads the “dress-up-in-pretty-gowns-and-look-for-drugs” sequences too often, preventing the later scenes from feeling fresh or exciting. It doesn’t help that the obnoxious score plays all the wrong tunes at all the wrong moments.

The goal of any comedy is to make people laugh, and sadly, “Baywatch” hardly manages. The film is the most fun when it hyperbolically parodies itself. It understands the absurdity of the original television series, and it never takes itself too seriously. The excessive exaggeration of Baywatch’s role as a covert, heroic task force is amusing, but the humor cultivates a shallow, juvenile tone. It does have some clever jokes about gender expectations, such as when Leeds is called crazy for her diabolical scheming, and she replies, “If I was a man you’d call me driven.” But expect any resemblance of intellect to be undermined by Stephen Hawking jokes, an awkward cross-dressing scene and some surprisingly graphic penis jokes.

Mitch is the most compelling character and a suitable anchor for the film, as his oceanic idealism and compassion for his team are likable traits. All the others are dull. Matt Brody (Zac Efron) is a strange chameleon who plays any role the story needs to move forward. At one point he recklessly weaves a stolen motorcycle through a crowded pier to launch himself after a drowning woman; at another he adamantly insists that lifeguards shouldn’t be doing this type of work. As for the female characters, well, anyone familiar with the source material should expect them to look really good but have no personal story arcs or clear motivations. Instead, they play the typical romantic interests, and their relationships are so forcefully constructed through the most awkward and unfunny dialogue that it’s easy to blush with secondhand embarrassment.

“Baywatch” is a sensational film that heavily relies on its visual appeal. Sadly, the Floridian filming locations and hot-red swimsuits become trite before the film reaches the halfway mark. Don’t even bother to look beneath the surface because there’s not much there. As a comedy, it’s over-the-top and knows it, yet somehow remains unaware that the jokes ran dry a long time ago.