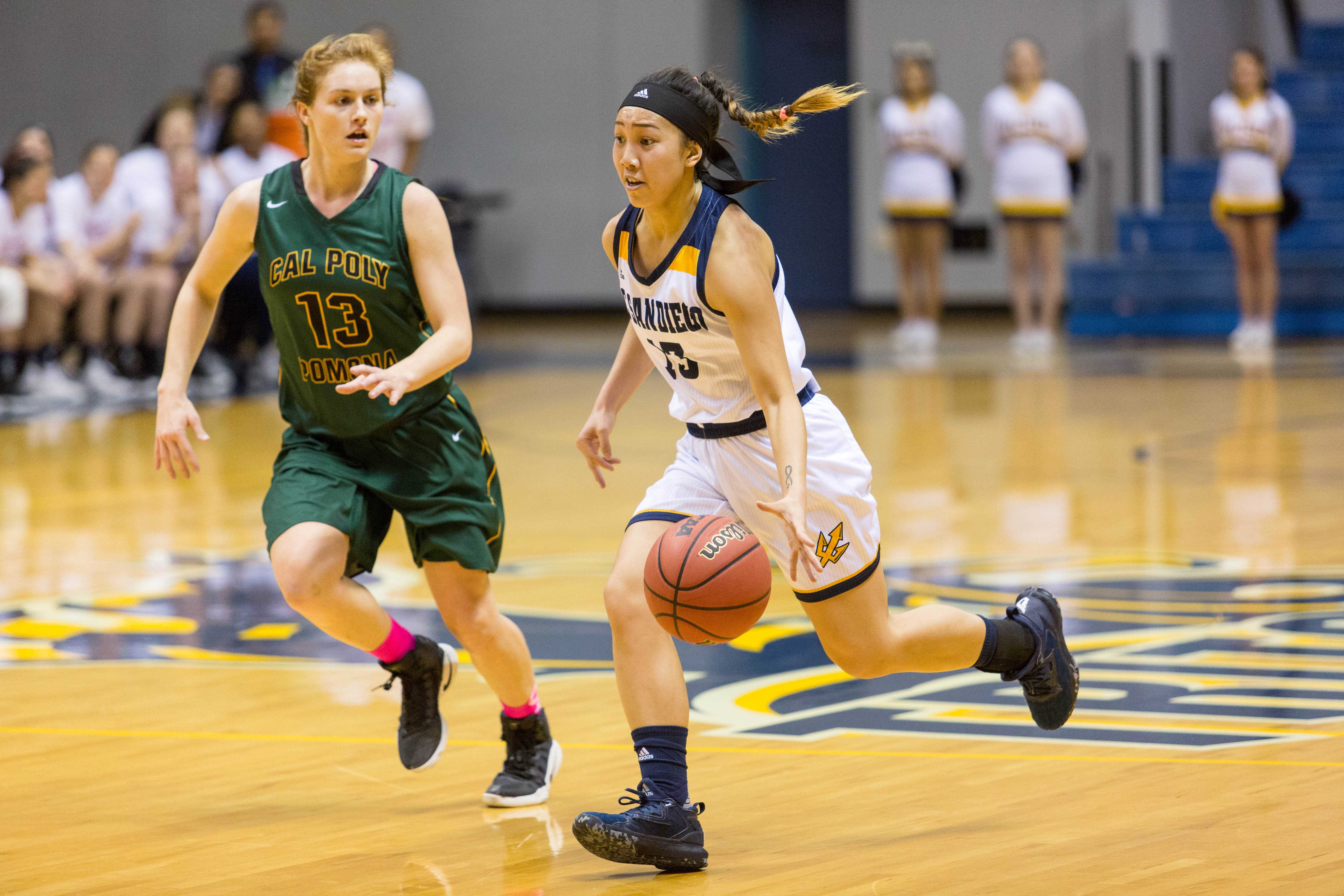 UCSD put on an offensive clinic against Cal Poly Pomona and never trailed throughout the game. The Tritons built a lead early on in the first and held onto the lead for the remainder of the game. While the Broncos shot a respectable 45.6 percent (26–57) from the field, it was not enough to top the blistering-hot Triton offense, which shot 56.3 percent (27–48).

The Tritons were led in scoring by senior forward Cassie MacLeod, who went 11–16 from the field for a career-high 30 points. Three other Tritons scored in double digits: senior guard Beth Mounier (15), sophomore guard Joleen Yang (11) and junior guard Paige Song (11). Mounier was also active on defense and distributing the ball, tallying five steals and six assists.

MacLeod credited her scoring performance to the shooting practice she put in throughout the season and her improved leadership abilities on the court.

“I just played hard, tried to score and be aggressive. That’s what we worked on all week, because in the past few games we’ve been pretty passive,” MacLeod told the Athletics Department, “And so, as a team, we decided to be more aggressive. I just happened to be the one that got the most buckets.”

The Tritons were led in scoring by junior forward Dalayna Sampton, who posted a game-high 19 points and nine rebounds. Mounier and Yang were also in double-digits, scoring 13 and 11 points, respectively.

The first quarter was a back-and-forth affair and ended with a layup by Lumberjack freshman guard Tyra Turner to tie the game at 15–15. The Tritons pulled ahead in the second quarter by outscoring the Lumberjacks 16–9. The score was 31–24 heading into the second half.

UCSD built on its lead in the third quarter that the Lumberjacks were never be able to come back from. At its greatest, the lead was at 14 points, courtesy of a layup by Sampton with 5:24 remaining. Humboldt State brought the game to 40–35 with a three by junior forward Allison Zalin at the 3:03 mark. This five-point deficit was the closest that the Lumberjacks ever got to overcoming the Tritons, as UCSD held onto its lead in the fourth to close out the game 64–55.

“I’m excited [for the game against San Bernardino.] … This is game time,” Sampton told the Athletics Department. “They’re going to come at us with everything they have, and we’re going to come right back. Our coach talked to us about not being a punching bag, but, you know, throwing some, and that’s my kind of game. I’m excited.”

UCSD will face off against Cal State San Bernardino at the Coussoulis Arena on Thursday, Feb. 23. Tip-off is scheduled for 5:30 p.m.