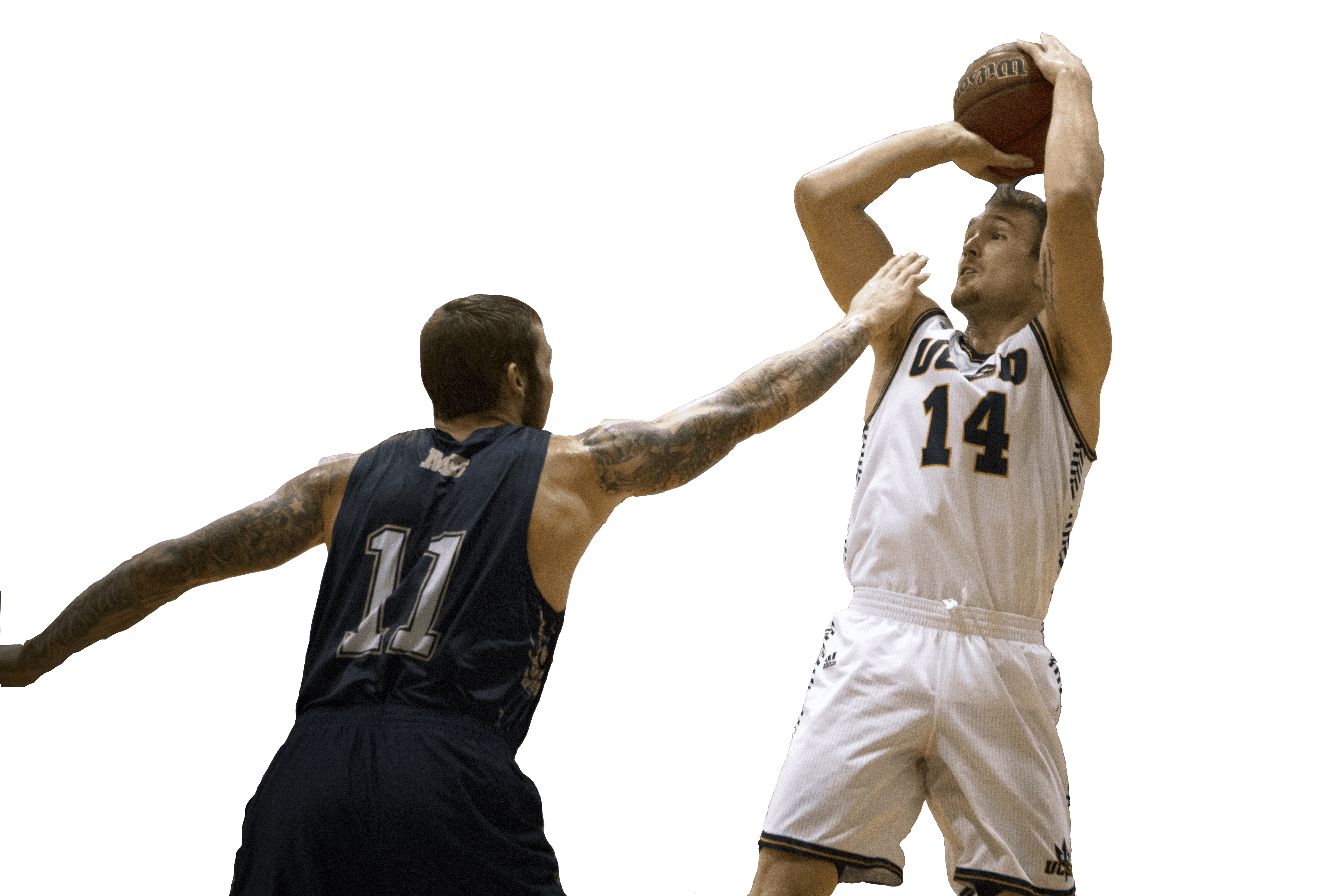 After ending its 2014 to 2015 season with a thud, the UCSD men’s basketball team has come out on fire this season, winning its first seven games and currently sitting at 10–2 overall. This hot start has allowed the Tritons to be ranked for the first time ever since they became an NCAA Division-II team, currently at No. 13. The team’s success has been no fluke, either; the Tritons have downed three top-10 teams, with their most recent victory being a stunning upset of the previously unbeaten No. 5 Cal Poly Pomona.

The fact that all of the previous year’s top players have returned and performed admirably has contributed to the team’s excellence. Once again leading the team with his consistent play, senior forward Drew Dyer has been averaging an excellent 15.8 points and 5.6 rebounds a game. Additionally, junior guard Adam Klie, who recently earned his second career double-double, has taken the next step in his game, averaging a stellar 14.1 points, 5.5 rebound, and a team-leading 3.4 assists per game. Also stepping up, junior guard Aleks Lipovic has been a deadly sharpshooter, making the second most three-point shots on the team just behind Dyer. Freshman center Chris Hansen and senior forward and center Zach McMillan have been a solid source of rebounds all season, averaging 4.9 and 5.5 rebounds per game respectively. The Tritons are on track to vastly improve on last year’s 16–11 record and have a good shot at making some noise come playoffs.

The UCSD men’s tennis team ended last year with an overall 12–9 record, along with being  nationally ranked 16th and regionally ranked 3rd. Although finishing with an above-.500 record during their last season, the Tritons struggled against nationally ranked opponents, going 1–5. They enter the season with 12 players on the roster, three fewer than last year. Freshmen Rodrigo Amaral, Richard Han and Riku Hashiyada all look to make a strong start to their collegiate career.

There is hope for another strong season following the tennis team’s strong performance during fall quarter competitions. Senior Axel Bouillin took second in singles at the STA/ITA Division-II West Regional Championship this past October and reached the doubles semi-finals after pairing up with senior JP Boyd.

Bouillin,as one of the more experienced players, hopes to lead the team toward a successful season as well as to improve his 7–10 singles record from the previous season.

The Tritons will be facing a number of Division-I opponents throughout the course of the season. After the likes of the Toreros from the University of San Diego, the Villanova Wildcats and the Georgetown Hoyas, UCSD will face off against the 14th-nationally ranked UCLA Bruins on March 22.

UCSD women’s basketball has started off the season incredibly strong, having only lost two of the games played so far. As the last season progressed, the Tritons went on a seven-game winning streak before the new year, before being held up by Anchorage.

As the mocking New Year’s saying goes, “new year, new me” — the Tritons decided they couldn’t have the losses of the previous year hold them back in this new year and came out against Humboldt State and Cal Poly Pomona with a desire for vengeance.

With redshirt sophomore guard Taylor Tanita, senior forward Farrah Shokoor and junior guard Jamie Katuna leading the charge, the women’s team is shooting at a very high percentage from the floor. The Tritons are currently dominating the CCAA and looking to continue to push the tempo and outscore opponents all the way to the postseason.

Facing a tough out-of-conference schedule to open the season, both the men’s and women’s squads fared well against some competitive Division-I programs. The women’s team is currently ranked No. 2 in the country and is led by some of its top returning swimmers from last year, like junior Jaimie Bryan in the breaststroke, sophomore Julia Toronczak in the backstroke, senior co-captain Colleen Daley, junior co-captain Natalie Tang and sophomore Stephanie Sin. On the men’s side, sophomore Kevin Wylder along with junior Michael Cohn highlight a group currently ranked fifth in the nation. True freshman Garrett Tse also had a convincing start to his Triton career, bringing more youth and talent to the program. Barring an improbable collapse, both the men’s and women’s teams should be able to dominate the Pacific Collegiate Swimming and Diving Conference once again and perform well at the NCAAs.

The men’s volleyball team finished with a horrid 2–26 record in the 2015 season. The Tritons finished 12th a year ago after going 2–26 overall and 0–22 in league play. Entering his 11th season as head coach, Kevin Ring has six starters returning for the 2016 campaign. The team star is sophomore opposite hitter Tanner Syftestad. As a freshman, Syftestad led the Tritons in several categories, including kills (241), kills per set (2.71), service aces (15) and total blocks (75). After having no seniors on its roster in 2015, the team will have only two seniors in 2016: captain and libero Tanner Howard and outside hitter Kirill Rudenko. UCSD is sending out a young team once again come January. However, a couple of experienced juniors are back: Shayne Beamer in the middle and Ian Colbert on the outside, as is the Tritons’ starting setter in sophomore Milosh Stojcic.

A trio of newcomers to keep an eye on are freshman middle blocker Nathan Thalken, fellow freshman Ryan Blaich, a setter, and outside hitter Josh Schmidt, a junior transfer from Irvine Valley College. The team includes seven first-year Tritons in total. In his second year on the coaching staff, Kyle Campana has taken over as Ring’s top assistant. UCSD begins the new campaign in less than a week when a season-long four-match home stand kicks off on Friday, Jan. 8 against University of Charleston.

After a 2015 season that saw them rise to No. 17 in NCAA Division-II and finish with a 12–13 record, the women’s tennis team is back. Returning leaders senior Kyra Scott, who finished ranked eighth in the nation, and her doubles pair with sophomore Britta Mosser, ranked 14th, look to highlight this year’s team. Along with freshman Madison Hale, who finished fifth in the Singles B draw from the CSUN Fall Invitational, freshman Alexandra Weil, who placed eighth, and sophomore Jasmine Hosseini, this year’s team presents an interesting mix of experience, youth and talent. With last year’s leader Scott returning, the women’s team will look to retain its place amongst Division-II’s top-25 and outperform its past year’s results.

Despite losing 2015 NCAA Division-II co-player of the year Courtney Miller and all-American Jolene Guiliana to graduation, UCSD returns with two all-Americans from last season, seniors Laurel Kistler and Julia Kirkland. Kistler led the Tritons in goals and steals, and placed second with 54 assists. Kirkland was second in goals with 63, adding 44 assists and 40 steals to her tally. With a younger team and the loss of all-time saves leader Miller along with Guiliana’s 58 goals and 56 assists, UCSD will find it difficult to repeat last year’s run to the NCAA eight-place finish. However, last year showed that this program should not be underestimated, as the Tritons will look to make it four straight trips to the Championships and dominate their conference once again.

UCSD softball enters the new year with a young team after losing only two players to graduation last year. Disappointed after a season without reaching play-offs, the group looks to rebound with one more year of experience under its belt. The Tritons have the benefit of five returning All-Conference players from last year. Senior left-hand pitcher Alexis Edwards led last year’s team with a 2.21 ERA, and sophomore outfielder Kendall Baker was third on the team with 11 stolen bases and had 22 hits. Along with junior utility player Bianca Devoto, junior first base Emma Schneider and senior second base McKenna Clewett, who led the team in six hitting categories (batting average (.319), on-base percentage (.424), slugging percentage (.493), runs (24), hits (46) and walks (18)), this experienced group looks to return to the postseason after a one-year hiatus.

Following a 36–21 season last year, the Tritons are entering their 2016 season nationally ranked at No. 26 in the Collegiate Baseball’s 2015 NCAA Division-II preseason poll. They will open up with a double-header against The Master’s College on Feb. 6 at home.

Offensive leader Larsen looks to put up some more big numbers this season, along with Sanchez, redshirt junior outfielder Brandon Shirley, Cruz and Flatt. With the loss of Justin Donatella dominating on the mound, the UCSD coaching staff looks to rebuild their pitching team as they currently have 21 pitchers on their active roster, 9 of them being freshmen.

The Tritons’ 2016 schedule consists of a large number of home games, as they begin their season with 15 games played in the newly renovated Triton Ballpark. Additionally, the Tritons are looking to improve on their previous post-season run and make it past regionals this year. With a lot of young talent on the mound and veteran hitters at the plate, the UCSD baseball team is ready to make a run for the national championship this season.

One thought on “Winter Season Preview 2016”