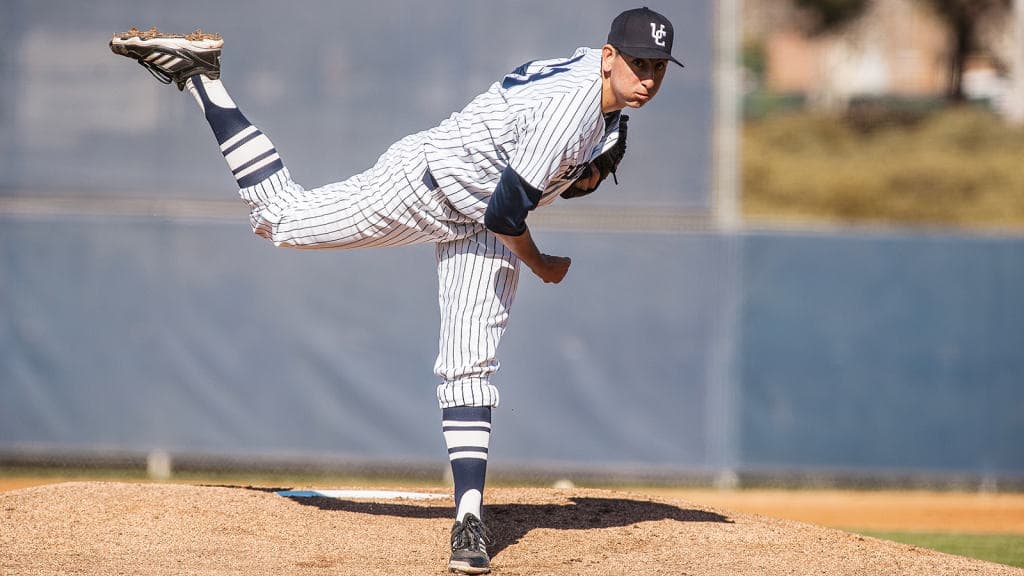 Pitcher Justin Donatella currently leads the Tritons on the mound, but is looking ahead to upcoming MLB draft.

Justin Donatella has already made history at UCSD. In the past year alone, he’s knocked down single-season records for ERA, strikeouts and opposing batting average; he led the California Collegiate Athletic Association during the regular season in multiple pitching categories and had an incredible 0.78 ERA leading into the postseason. He was recognized for a handful of awards for his stellar performance on the mound: He was named the CCAA’s Most Valuable Pitcher and was the consensus vote for West Region Pitcher of the Year, as well as All-American. Donatella’s story wasn’t always one of massive success; rather, it was one of pure determination and rock-solid work ethic. The 6-foot-6-inch right-hander out of Saugus High School in Simi Valley, California, started out in baseball like any other kid. He started playing at age five and, gradually, baseball morphed from “just a game” into something that defines his life. He came into the recruiting game as a junior with a modest 3–5 record and a 3.74 ERA. This record didn’t make him highly sought after by big Division-I programs, but UCSD Head Coach Eric Newman saw potential. “He was a big, athletic kid,” Newman told the UCSD Guardian. “He had a good arm; he just wasn’t necessarily a good thrower by Division-I standards at that time. We saw there was a good chance that he could improve and do well on our team, though.” Coming in to UCSD, Donatella knew that it could be the right fit — and not just because of baseball. With two parents involved in education, going to a school with a good academic reputation was a no-brainer. After a visit to the campus, he knew it would be the right choice. From the get-go, he was “locked into the UCSD experience,” according to Coach Newman: He maintained his academic standing and put effort into his classes. He took care of his grades to hang on to his eligibility and to be able to achieve athletic and academic success. The right-hander had committed to becoming something great, and he wasn’t going to let go until he had reached his goals. However, as is typical for many freshman recruits, the pitcher had significant work to do on the field to establish himself as a dominant feature in collegiate baseball. “Coming in, I was just another freshman,” Donatella told the Guardian. “I struggled. You learn from all of the struggling, though. By the last week or so of my [freshman] season I knew I wasn’t going to play much more, but I took what I had a hard time with [during the season] and just worked on it. I still worked out; I went to the gym with one of my buddies every day, I worked on throwing … [and] just got in any extra practice I could.” It wasn’t long before he hit his stride. After the typical bumps and bruises of his freshman experience, Donatella began to step into the limelight. “He made a significant jump his sophomore year,” Newman said. “He got stronger; he threw a little harder. He started pitching in the upper 80s to low 90s and started looking like he was going to be a top pitcher for our league.” He didn’t disappoint. His sophomore campaign was just the start of something great, but his junior season was what really turned heads. Coaches and MLB scouts alike were noticing Donatella’s experience and “maturity” on the mound — the payoff of countless hours of extra work outside of practice. “The ultimate goal for me was always to win a national championship,” Donatella said. “I wanted to be the ‘Friday-night-guy,’ the ace of the staff. It helped for me to just put in that extra work and to talk to my coaches. They can give you an outside perspective, and it helps you learn what needs work.” Now, after a stellar junior season, the pitcher has some major decisions to make. MLB scouts caught wind of the success Donatella was having, and they liked what they saw. “I know we had scouts at almost every game he pitched this year — he has a good opportunity [to go pro], but he ultimately will be the one to decide if he’s ready to take that next step,” Coach Newman said. Donatella is just shy of a week before he has to make his decision: to ink a professional contract or to stay another year at UCSD. Both coach and parents agree that, regardless of when he chooses to go pro, his schooling will be most important. Whether it’s now or later, it seems the general consensus is that his academic history will play just as important of a role in deciding Donatella’s future as baseball will. Newman — a junior signer himself — knows that it will ultimately be about finishing his degree and having a solid academic history behind him, despite his talent and professional potential. Whatever his decision, he will surely have a bright future ahead of him. “Even if he [doesn’t] sign this year, I’m sure he’ll get the opportunity again next year,” Coach Newman commented. “He’s got a great work ethic and good athleticism; he’s been working and developing all three of his pitches. He’s worked a good change-up and slider, and he throws a good fastball. He’s going to do well whenever he decides to [play professionally].” Donatella, like many other baseball players at every level of play, knows that playing MLB is the ultimate dream. “If it all pans out, I want to pursue that [dream], but I could very well be back playing for UCSD next season, too. My parents will be in on the decision too; I’m just waiting to see if it’s all going to line up.”