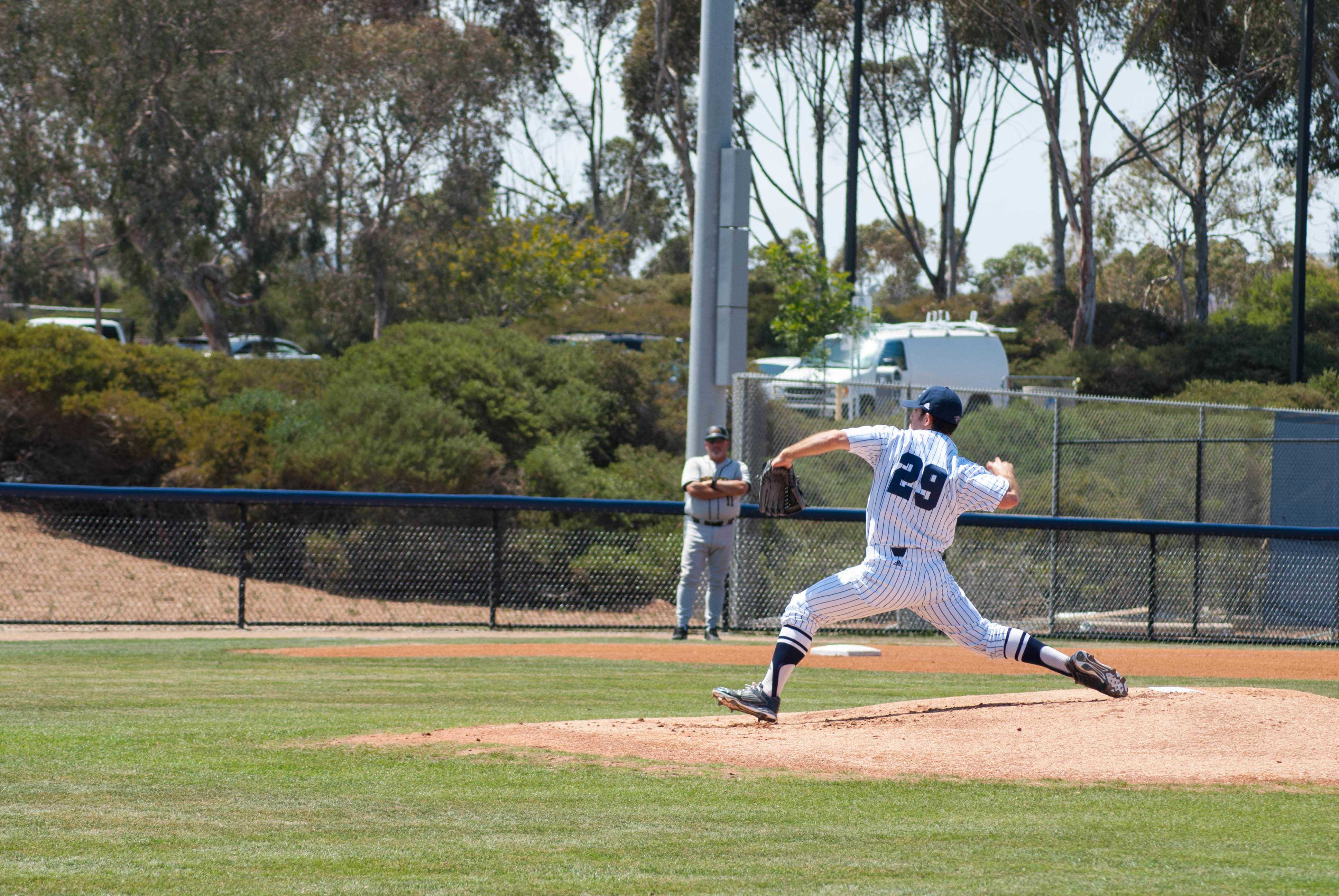 UCSD suffers back to back losses to end CCAA Tournament.

The No. 30 UCSD baseball team was putting its title back in play last week at the California Collegiate Athletic Association Tournament in Stockton, California. Winner of last year’s edition, the second-seeded Tritons could not repeat their success however, with back-to-back losses to first-seed Cal Poly Pomona and fourth-seed Cal State Dominguez Hills after an opening round win against third-seed Cal State Monterey Bay. No. 18 Cal Poly Pomona went on to win its first-ever conference championship, shutting out Cal State Dominguez Hills 4–0 in the final. UCSD dropped to 33–19 overall on the season as the tournament concluded.

Recently named CCAA Pitcher of the Year, junior right-hander Justin Donatella (9–2) took the mound Thursday night for UCSD’s opening game of the tournament against Cal State Monterey Bay. He led the Tritons to a 5–2 win with a performance worthy of his distinction.

Through the first seven innings, the two teams got runners on base but could not manage a score. In the top of the eighth, Donatella ended his night by retiring the first three Monterey Bay players at bat on a first-pitch popout, flyout and strikeout. UCSD’s offense broke through in the bottom of the eighth when it scored five unearned runs. Senior catcher Brett Levy came up clutch, hitting a two-run single into left center to score junior infielder Troy Cruz and redshirt freshman infielder Tim White, which gave the Tritons a 2–0 lead. The Tritons continued to showcase their offensive firepower when sophomore infielder Tyler Howsley hit a single to bring home Levy, followed up by a double into the left field by sophomore outfielder Brandon Shirley to bring the score to 4–0. Finally, junior outfielder Gradeigh Sanchez brought Shirley home to end the inning.

Down 5–0, Cal State Monterey Bay attempted to mount a comeback in the top of the ninth. The Otters got a quick two runs on the board and loaded the bases, threatening to tie the game up at five apiece. Relief pitcher Cruz got out of the situation and ended the game by making redshirt junior infielder Matt Urakami swing and forcing senior outfielder Will Rosado into a game-ending fielder’s choice.

“I just tried to get out there and try to do what I could to help my team win,” Donatella told the department of athletics. “We have been getting better lately and we just pick each other up.”

Donatella had 8.0 shutout innings on two hits, both singles, two walks and two hit-by-pitches. He also had nine strikeouts for a league-leading season total of 103. He lowered his league-best ERA from 0.86 down to 0.78, riding a shutout stretch of 15.2 frames. Donatella had his 100th strikeout of 2015 during the game, only the third all-time Triton to get 100 strikeouts on a season.

After this dominant performance, UCSD advanced to the next round to face Cal Poly Pomona. On Friday night, the Tritons dropped a gut-wrenching game as Cal Poly Pomona rallied late to beat UCSD 2–1.

In the bottom of the second, UCSD struck first. Sophomore outfielder Jack Larsen singled one, and Cruz reached base on the next at bat. The two players managed a double steal when Levy struck out, and a mistake by Pomona’s sophomore catcher Christian Kelley allowed Larsen to reach home.

The Broncos tried to even things up in the fourth, but a nice relay by senior first baseman Michael Mann allowed Levy to easily tag a Cal Poly Pomona player to end the inning. In the bottom of the inning, UCSD had a chance to build on its lead, but a failed Howsley squeeze attempt and a strikeout closed the inning.

The score stood until the top of the eighth, when Cal Poly Pomona’s junior infielder Ryan Webberley reached on a wild pitch to open the inning. An error and a passed ball put UCSD in a difficult situation, with two Broncos in scoring position with one out in the inning. A groundout to shortstop by freshman outfielder Jacob Bernardy, followed by a wild pitch that brought junior infielder Nicholas Bruno home, helped Pomona take a 2–1 lead that would hold up until the end of the game.

“Pitchers did a good job of stranding runners,” UCSD Head Coach Eric Newman told the department of athletics. “Neither team really executed very well. We had some chances and didn’t take advantage of them.”

Senior right-hander Dan Kolodin had 4.2 shutout innings on two hits. He also walked five and struck out eight. Larsen was 2-for-3 with a walk, run scored and stolen base. Sanchez was 2-for-5, while Cruz reached base three times.

After Friday night’s defeat, UCSD had to prevail against Cal State Dominguez Hills and twice against Pomona to hold onto its CCAA crown. UCSD did not manage to win its first game on Saturday though, losing 3–2 to Dominguez Hills in extra innings.

The Toros struck first in the bottom of the first, when back-to-back singles and an outfield error brought home their first round. With two runners in the corners in the fourth, the Toros doubled up their lead with a single to left that brought one home.

The Tritons answered in the fifth. Howsley doubled into right center and senior infielder Erik Lewis singled to left. Redshirt freshman outfielder Justin Flatt loaded the bases with nobody out. Freshman infielder Tyler Plantier then came up huge, with a two-out, two-run single to tie the game up at 2–2.

The score remained leveled up until the ninth inning. In the bottom of the ninth, however, the blue and gold faced adversity when the Toros loaded the bases with two outs. Cruz saved the team when he got senior first baseman Juan Avena to fly out to Sanchez in left-field, which pushed the game to extra-innings.

UCSD got things going in the top of the tenth, but could not capitalize with a run. In the bottom of the tenth, Howsley committed an error which put freshman first baseman Jesse Oropeza on. Shirley could not get a high ball from junior outfielder Johnny Palmer, giving redshirt freshman pinch runner Forrest Riley the time to get to home base and secure the win for the Toros.

Larsen had another good game when he went 2-for-3 with two walks. Plantier was 2-for-4 with two RBIs. The Toros’ pitching staff dominated the end of the game when they retired 11 consecutive Tritons until the ninth. Two Tritons, Donatella and Larsen, were named to the 12-player All-Tournament Team after the game.