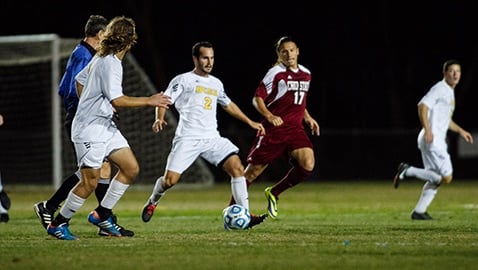 Six kickers deep into a penalty kick shootout that would decide who, between UCSD and Chico State, would advance to the third round of the NCAA Tournament, senior goalkeeper Josh Cohen was tasked to make his third penalty save of the night.
Having already faced five Chico State kickers and made an unheard-of two penalty kick stops, the California Collegiate Athletic Association Defensive Player of the Year made a diving save to deny Chico’s Justin Saul.
“At that point we had already taken our seventh penalty, so there wasn’t much pressure on me,” Cohen said. “I basically just watched their guy approach the ball and went with my instinct. I was just able to get my arm all the way out there and was able to make the save.”
The penalty kicks came after 110 minutes of play, resulting in a 1–1 draw.
In front of a crowd of nearly 1,000 people, second-seeded UCSD faced No. 3 Chico State for the fourth time this season. The Wildcats took the early lead when Chico’s Matt Hurlow found himself unmarked 25 yards out. In the eighth minute, Hurlow hit a rocket to put Chico up 1–0. UCSD equalized 10 minutes later on a header by senior defender Gavin Lamming, who got on the other end of a free kick by Andisheh Bagheri.
“Our guys did a great job after giving up an early goal,” UCSD head coach Jon Pascale said. “I think they could have easily crumbled playing in front of such a big crowd, but they answered right back with a goal of their own.”
Unable to break the tie in regulation, the Tritons played through two overtime periods — marking the third straight overtime bout between the two CCAA powerhouses.
All-CCAA first team selection Alec Arsht and senior midfielder Cory Wolfrom both logged significant minutes despite having been involved in a car accident with a driver that ran a red light just hours before the match.
With the 1–1 tie, the Tritons will advance to play No. 12 nationally ranked Simon Fraser — who beat Cal State Los Angeles last Saturday — in the third round of the NCAA Tournament.
UCSD has not faced Simon Fraser this season, but Cohen said the match will likely feature UCSD’s league-leading defense and Simon Fraser’s dynamic front line, which has the second highest goals per game average in the nation with 3.44.
“From what it seems, Simon Fraser’s very offensive-minded, they average over three goals a game, so it will be interesting to see our defense take on their offense,” Cohen said.
This Wednesday, UCSD will travel to Denver, Colo., where the West Regional finals will be held.
The Tritons will meet Simon Fraser Friday, Nov. 22.
The winner will advance to the Elite Eight to face the winner between hosts Regis and Midwestern State.