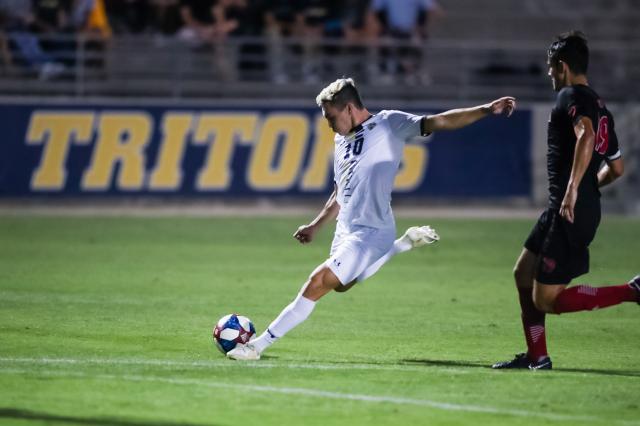 UC San Diego men’s soccer came up short last season. The 2019 season will be UCSD’s last season in Division II, marking the last time head coach John Pascale and his team will be able to take a shot at a National Championship in the NCAA’s Division II. The UCSD Guardian’s Jack Trent Dorfman got the chance to talk with Coach Pascale at practice this week to discuss the current season and the future of the team. Here’s what was said.

JP: Non-conference play just showed us a little bit of everything. We’ve been in games where we’ve scored a lot of goals; we’ve been in games where it’s been a little bit tighter and we’ve found ways to win. We’ve been able to come from behind; we’ve been able to come from behind down a goal. I think it’s been a really successful non-conference segment where we’ve learned a lot of lessons that we’re going to need in order to be successful in our conference. The competition in the CCAA is probably the best in Division II, so every game is going to be a battle and we’re going to need to be at our best.

JD: All of your games have been at home except for the San Diego State game [and other exhibitions]. How is preparation for road games different?

JP: We talk a lot about winning on the road. To be a championship team, you’ve got to win on the road. There’s a lot of little details that are different from your home routine and you’ve got to be able to focus through those. The field is one. On Friday we’ll be up at [California State University,] East Bay on a huge turf field and then we travel Saturday and play [California State University,] Monterrey on a thick grass field, so those little details change the way the game is played. They’ll also be playing two completely different styles, so you’ve just got to be able to focus through those details and still do the things that you do well, and not let those things throw you off.

JD: So far, excluding the [San Diego] State exhibition game, you guys have allowed four goals in six games. Is that something you guys stress in practice or something that’s happened naturally with this team?

JP: We always stress it. We feel like for us to be there at the end of the season we have to be one of the best defensive teams in the country. I have to say that I thought that all the goals we’ve let up [so far this season] were fairly preventable. We preach a lot about if the other team is going to score a goal on us they need to be really good. We’re early in the season and I thought we’ve made a couple of mistakes. We’ve looked to clean that up moving into conference [play].

JD: Moving ahead, it’s your final season in DII, does that affect recruiting at all?

JP: You know, I think a little bit. There’s some excitement around the Division I move for sure. I think for a lot of players they have that DI stigma, they want to be a part of Division I, which I understand; I was the same way as a player. At the same time, they don’t understand how competitive Division II is, especially within our conference. It’s something we’re excited for and it’s something we’re certainly celebrating and talking about without losing focus on this season. My take is we’re not going to think about it too much right now; after the season we’re going to shift a little bit. But for right now we’ve got some really tough teams we have to play and beat so we’re going to focus on [them].

JD: On the other side of [the move into Division I], has recruiting been hurt by kids not being able to play in the playoffs for the next four years?

JP: You know, our whole philosophy in recruiting is to keep it the same in how we’ve built the program in Division II, and that’s [been] built on good, hardworking, honest kids that absolutely love UCSD. Most of our guys here had Division-I opportunities but they really loved UCSD. This is where they wanted to be, so we want to stick to that and make sure we’re finding the right fit. They’ll have to sacrifice postseason but still its the University, the environment within the school, the academics behind the school, that’s going to attract the kids that we ultimately want to get here.

JD: I was talking with coach Ricci [Luyties] the women’s volleyball coach and he was basically saying the same thing that it’ll kind of hurt for this year but eventually you’ll get through those four years.