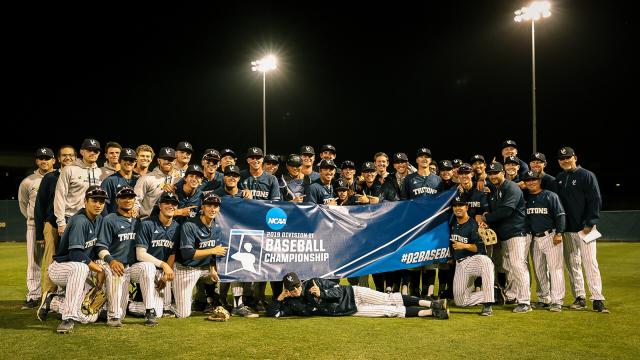 To earn the sub-regional victory, the UCSD Tritons had to best both the Montana State University, Billings Yellowjackets and the Point Loma Nazarene Sea Lions, playing twice on both Friday and Saturday to secure their spot in the next round of the playoff tournament.

“It was a long two days,” said head coach Eric Newman after the clinching Saturday night game. “I’m really proud of the way the guys grinded it out.”

In the team’s first game of the tournament, after trailing 4–0 for the majority of the game, UCSD took down MSU, Billings by the final score of 7–5 at Triton Ballpark on Friday, May 17 at 3:30 p.m., eliminating the visiting Yellowjackets from the NCAA Division II West Regional tournament, and marking the beginning of a stretch of four games in 48 hours for the hosting Tritons.

The loudest applause of the entire tournament, the final out of the last game notwithstanding, came when the UCSD softball team walked into Triton Ballpark hoisting its sparkling NCAA Division II West Region championship trophy, but that wasn’t because the weekend’s baseball games were devoid of excitement.

In the MSU, Billings game, a 7-run bottom of the 6th inning saw all of the UCSD runs cross home plate, with redshirt sophomore first baseman Blake Baumgartner getting the scoring started with a 2-run line drive single to left field with the bases loaded. After Baumgartner’s single, the Tritons tied the game at 4–4 with a double off the very top of the wall in left field off the bat of junior left fielder Alex Anthanacio on a 3–2 pitch, prompting an MSU Billings pitching change.

Directly following the win against the Yellowjackets, UCSD began to prepare for what would be a best of three series against Point Loma Nazarene which began that Friday night and lasted all the way until almost 11 p.m. on Saturday night.

In game one of this series, the Tritons weathered a 4-run fourth inning from the Sea Lions with 3-run and 6-run innings of their own, ultimately taking advantage of walks, errors, and wild pitches in order to score 11 runs on 13 hits, beating Point Loma Nazarene 11–4. For UCSD, the offense was led by redshirt junior second baseman Keenan Brigman. Brigman had a 4–5 night at the plate and scored two runs for the hosting Tritons, and his hustle double to lead off the top of the sixth inning sparked a 3-run sixth inning that tied the game and shifted the momentum into the home dugout.

“I was just trying to work and try to put a ball hard in play,” Brigman said after the game. “When I first looked out of the box I saw the left fielder not working too hard to get to the ball very quickly so I decided right then and there I was going to try and take two and thankfully it worked out.”

After the game Point Loma Nazarene head coach Justin James, former UCSD pitching coach from the prior two seasons, was frustrated by his team’s mistakes. “It was just not good baseball, we had a couple of plays I thought were a little lazy,” James said after the game. “Good teams are going to expose that and that’s exactly what happened.”

In game two of the best-of-three series between Point Loma Nazarene and UCSD on Saturday, May 18, walks, errors and wild pitches ruled the day once again. Both teams had their fair share of important hits, but the 8–7 thriller between the no. 2 Tritons and no. 3 Sea Lions came down to whichever team made the least costly mistakes.

The game, which began at 3:30 p.m. at Triton Ballpark, promised a spirited matchup, as Point Loma Nazarene had to win to secure a chance at a winner take all game against UCSD later that day. And win they did. The Sea Lions overcame a rough day in the field, especially for their junior shortstop Miguel Cazares, making use of 12 hits and 8 walks to put the game just out of the home team’s reach.

Point Loma Nazarene demonstrated just how badly they wanted to win right out of the gate, with junior second baseman Travis Takata launching a home run far over the rightfield wall on the first pitch of the game from UCSD sophomore starter Noah Conlon to leap out to an early 1–0 lead. Conlon, a righty who had just 8 starts this season, would allow a second run to cross the plate in the second inning, with the eighth and ninth hitters in the Sea Lions’ order knocking back-to-back extra-base hits to take a 2–0 lead.

The Tritons weren’t done fighting yet, launching an offensive of their own in the bottom of the second inning that saw 3 runs score and the lead switch back in favor of the home team, with three straight hard-hit balls finding the outfield grass through the 5-6 hole, two of which Cazares misplayed, and a pair of walks helping to give the hosting team a 3–2 lead.

After a quiet third inning, the back and forth battle that would last the remainder of the contest began. UCSD padded its lead to 4–2 with a wall scraper of a home run off the bat of senior right fielder R.J. Prince to the opposite field. In response, Point Loma Nazarene knocked in a run of its own in the top of the fifth on a double that hugged the third base line by senior infielder Colby Kaneshiro, the hottest hitter in the sub-regional tournament, to bring the score back to within a run at 4–3.

The Tritons followed this up in the bottom of the fifth, with junior left fielder Alex Athanacio pulling a no-doubter to left field to put his team up 5–3 on the 100th pitch of sophomore starting pitcher Nathan Garkow.

While this may have seemed like the dagger, the game was far from over in the eyes of the Sea Lions. Their bats and pitching livened up as the UCSD dugout and fans quieted down. Point Loma Nazarene’s righty junior reliever Jerry Quemada shut down the potent Triton lineup for 3 and ⅔ innings, striking out 5 on his way to the win.

But the bats were the truly important piece for the Sea Lions. All of the rest of their runs came in the top of the seventh inning off of UCSD junior reliever Ted Stuka, a 39th round pick of the Baltimore Orioles in the 2018 MLB Draft. Stuka, a 6’7 inch junior right-hander, came into the game in the top of the fifth in relief of Conlon and immediately struck out the first batter he faced. He started off the sixth inning with a punchout as well, but the seventh inning would not go to plan.

With runners on first and second and one out for Point Loma Nazarene, a single up the middle by the slumping junior outfield Micah Pries, who had been hitless in his last 8 at-bats with 5 strikeouts, cut the deficit to just one at 5–4. Pries took second base on defensive indifference to put runners on second and third for the red-hot Kaneshiro, but before the righty slugger could drive the pair in, Stuka uncorked a wild pitch to tie the game at 5–5 and eventually walked him.

With runners on the corners, Stuka strikes out the Sea Lions’ five-hitter to secure the second out of the inning before things spun further out of control. A wild pitch to sophomore first baseman Justin Ledgerwood scored Pries from third base, and moved Kaneshiro to third, and Ledgerwood was able to drive him in with a single up the middle, putting his team on top 7–5. Stuka would strikeout the final batter of the inning, but the damage had already been done.

Point Loma Nazarene added an insurance run in the top of the ninth, with the only thing keeping the Sea Lions from adding a second run being a stellar throw to the plate from Athanacio in left field.

Point Loma Nazarene never relinquished that lead though, even when UCSD threatened heavily in the bottom of the ninth. All with one out, the Tritons knocked a pair of singles and loaded the bases with a walk to bring up Athanacio with the bases loaded. Quemada would punch out the heavy-hitting left fielder but would walk Brigman to bring in a run and make the score 8–6. Another error by Cazares at shortstop kept the bases loaded and made the score 8–7, but redshirt freshman pinch hitter Logan White popped out to the same shortstop to end the rally and the game.

After this game evened the series, the Tritons and Sea Lions were on even footing for the sub-regional finale, with Point Loma Nazarene designated the home team for this night game thanks to having won the coin toss the day before despite the sub-regional being played at UCSD’s home field. For game four of the sub-regional and the third game of the series between the two local rivals, neither side had much pitching left.

For coach James and the Sea Lions, their pitching staff had been almost completely depleted over the course of their four games from Thursday, Friday and from the earlier Saturday game, but California Collegiate Athletic Association Coach of the Year Eric Newman and the Tritons still had two of their top arms fresh for the sub-regional finale in junior pitcher Luke Mattson and senior pitcher Kyle Lucke, and the dynamic duo carried the team over the hump and on to Azusa Pacific University.

Mattson came into the game in the bottom of the sixth inning, with his team having just put up a run in the top of the sixth to bring the score to 5–4 in favor of Point Loma Nazarene. UCSD, despite jumping out to a 3–0 lead in the top of the first inning thanks to a monstrous home run by redshirt sophomore catcher Aaron Kim, was down 5–3 at the end of the fifth inning, thanks to 3 doubles and 2 unearned runs from a 2-out throwing error by Brigman.

After having seen his team respond with a run of their own the half-inning later, Mattson poured on his own fuel to the energetic fire that was the Tritons’ dugout. Over his 3 innings in the game, the righty struck out 4 batters and allowed just 2 hits. All the while, the UCSD bats were coming alive once again. The comeback kids responded to Mattson’s two-strikeout sixth inning with a three-run outburst in the top of the seventh inning, with a home run from CCAA Most Valuable Player sophomore shortstop Shay Whitcomb, an error that scored one, and a bases-loaded walk to provide an insurance run that drove the score up to 7–5 Tritons, where it would remain for the rest of the night.

After having been set up for the save by Mattson and the UCSD offense, it was Lucke’s turn to do his part to send the Tritons on to the next round. In his first and last appearance in the sub-regional round, the 6 foot 6 inch right-hander punished the Sea Lions with a fresh arm and killer fastball, setting down Point Loma Nazarene’s second, third and fourth hitters, the latter two on strikeouts, to end their season.

Baumgartner finished up the four-game sub-regional with 8 hits, 4 runs scored, and 5 RBI, with his best performance coming when the team needed him most, as he collected 4 hits and a walk in five plate appearances in the sub-regional finale.

The team will take on the Azusa Pacific University Cougars at Azusa Pacific in a best of three series slated to begin at noon on Friday.