“Can I get this?” my nine-year-old self inquired, a hopeful grin on my face as I handed the dinosaur T-shirt to my guardian*. A noticeable scowl developed on her face, her eyes looking down condescendingly. “This is a boy’s shirt. You’re not allowed to wear this,” she scolded, tossing the article of clothing into the nearest rack. Puzzled, I asked, “I always play with dinosaurs, and I’m not a boy!”

She huffed, taking my hand sternly and leading me to the “girls’ section” of the store. “Well, wearing that shirt will get you made fun of, so I suggest you pick a shirt from this section.”

Disappointed, I took a pink horse T-shirt and watched the approving the smile that lit up my guardian’s face.

The obsession with the binary of clothing has always been a topic that perplexed me; why are there such rigid gender restrictions centered on a commodity that is supposed to express us? Growing up, I could not understand why I could not wear a certain brand of shorts or shirts because they were labeled as “boys’ wear.” It was a constant fight to ask for video game T-shirts and darker hoodies because “that was not what girls were supposed to wear.” I started to grow a hatred for “feminine” clothing, like skirts and dresses, because of these restrictive roles placed on me at such a young age. Dressing in “boy” clothes was an act of rebellion for me, even though I should not have had to oppose something centered in “free choice.” 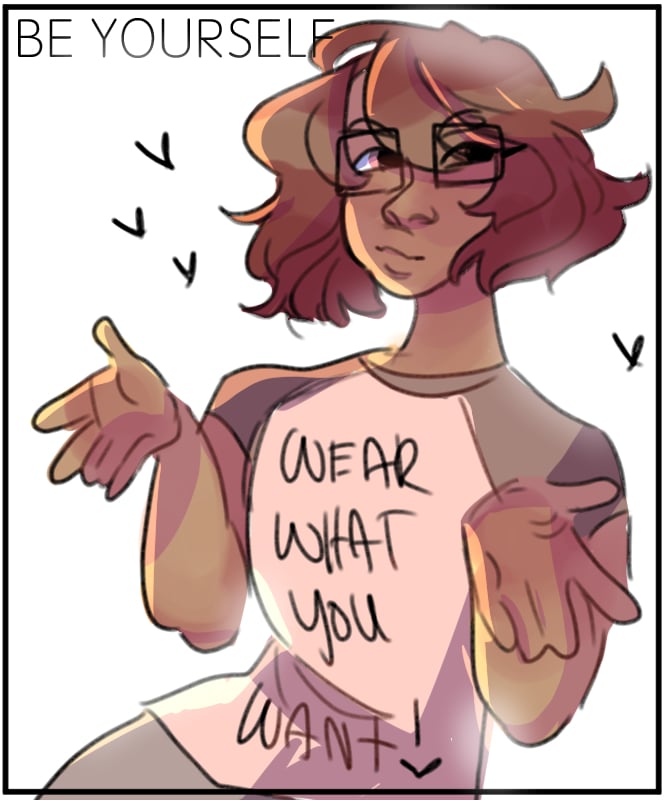 This is not just an issue surrounding young girls; young boys and teens face an even more prominent challenge when trying to wear “feminine” clothing in public. The concept of clothing, in general, has always been regarded as something more innately “feminine-coded,” making it “inappropriate” for boys to partake in because it could damage their masculinity. Teaching boys that they are not allowed to wear skirts, dresses, or even participate in “fashion” itself is a damaging mindset that can evolve into issues of toxic-masculinity.

These gender norms in clothing are especially harmful to trans youth who question their own assigned gender or even lie outside of the binary. Speaking as a non-binary person who questioned their gender identity early on, I was interrogated constantly on why I decided to dress “so much like a boy.” Trans women who dress in “feminine” clothing are often subjected to extreme violence simply because transmisogynistic people will claim that those clothes are not for them. Trans men cannot dress in “feminine” clothing either without getting comments that suggest a switch to “masculine” clothing. It is all brought back to the obsession of clothing equalling gender. One can choose to dress as “feminine” or “masculine,” but that should not always indicate what someone’s immediate gender is.

In short, dress how you want and how you identify — do not limit yourself to others’ gender expectations of clothing. Even though society has taken some effort to move to a gender-neutral view of clothing, it will take quite a while to uproot an institutionalized practice. What is most important is to dismantle these ingrained thoughts and work to wear what is most comfortable to you and you alone.

Now that I am here in college, I am excited to represent my own identity and explore other aspects of fashion that were restricted from me. No matter whether I dress “feminine” or “masculine,” I know my own person and my own agency. So sit back, like me, in my cozy pajamas and dinosaur tee, and enjoy the free reign of fashion!