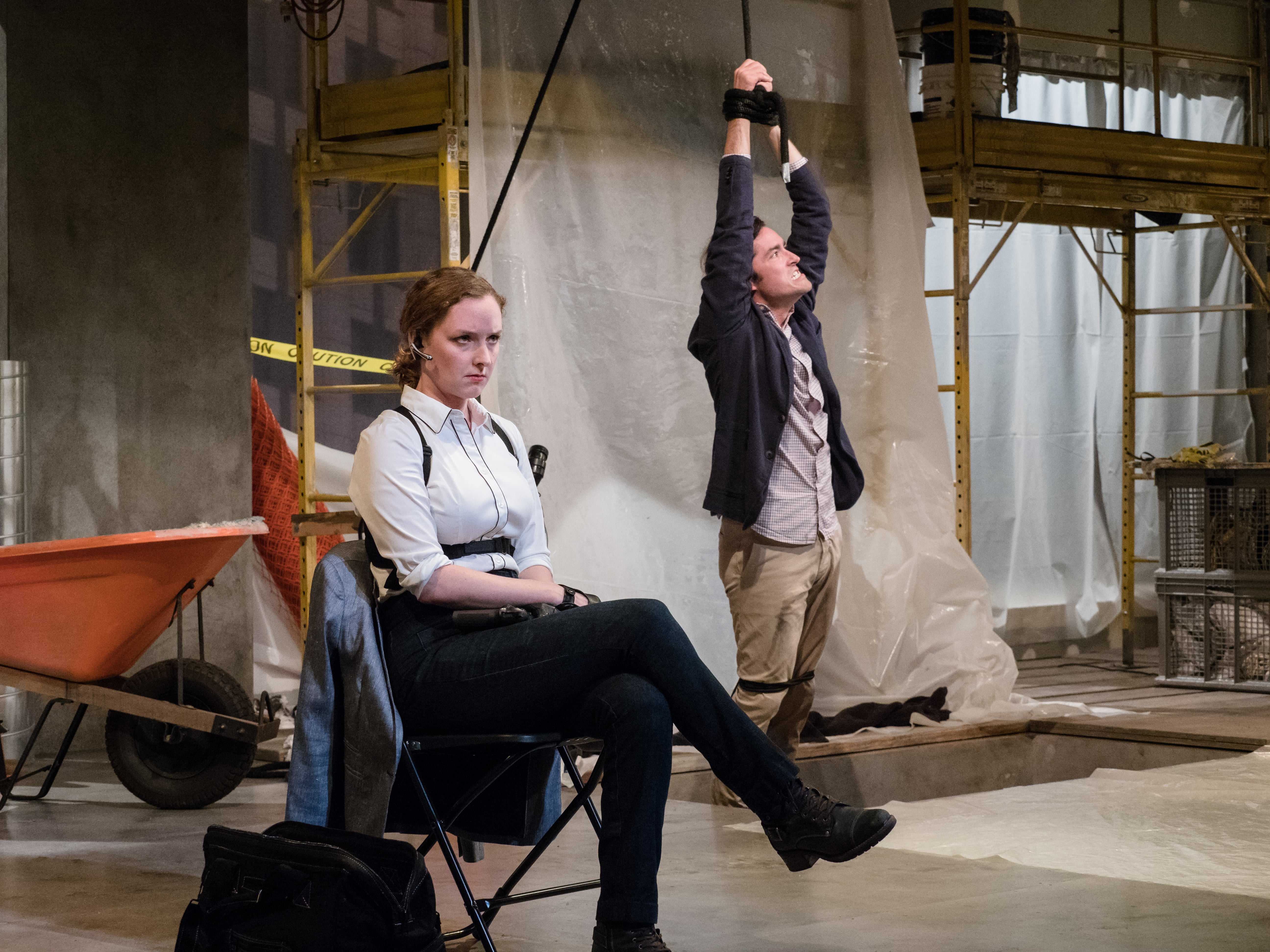 Spy stories are hardly a novelty. Whether spoof or straight story, the spy field has become ever more crowded in recent years. We’ve got today’s Bournes, Bonds and Atomic Blondes taking the charge. However, it can become difficult to stave off the blood and backstory (tragic, of course) shepherded by our trained killers, so we seek solace in spoofs. With a menagerie throughout the decades like “Get Smart,” “Austin Powers” and “Archer” to keep us satiated, they all operate off the same sturdy skeleton — shine a light on offbeat spies and their lives behind the lead curtain.

But what happens when a spy realizes she has no life outside of what happens to be the family business? An existential crisis in the upper floors of a tower under construction, soothed by several rounds of Bejeweled and the artery-constricting appeal of saturated fats.

We set our eyes upon our star and spy, Sheila (Amanda Quaid), huddled over her phone in blase indifference to the man hanging by his wrists behind her. Like a bad parent, she actively ignores his incessant wailing and urinating until he’s ready to talk. Not everybody can be as efficient and dry as our neighborhood spy. Soon, the hanging man begins to bare his soul, waxing poetic about how he previously held profit higher than people and the value of family — before he’s popped in the head. She’s clearly not one for drama, but trauma.

When we see her milling about and cleaning up moments after, she does so without joy. Progression from one point to another for her isn’t a question of passion, but pragmatism. Every step counts if any turn around the corner could be your last. Her incredible restraint keeps her from feeling for anybody or anything outside of her family, but that has begun to change; earlier in the day, she runs into an old friend, with two daughters instead of two glocks in tow. Sheila’s vision of a different life, while far from specific, seems to just be that — life absent of death.

With the appearance of Sheila’s sister Abi (Xochitl Romero) and the intrusion of their mother Gloria (Candy Buckley) only ups the pettiness quotient of their bickering. Abi, an impossibly humble Wharton graduate, brings along conversation and quesaritos. Gloria packs a little lighter, bringing no more than her sardonic tongue, sneer and a handgun or two. These women don’t waste time in what quickly becomes their impromptu stakeout, observing and reporting on their mysterious target between the verbal sparring. Mat Smart’s writing does well in subsuming characters’ dialogue with their eccentricities and tics, like Gloria’s enunciation of “shit” — which has a lovely coarseness to it imbued by a few decades of experience in the field and as a mother. Besides the slightly-too-frequent namedrops of Snapchat throughout the play, the dialogue flows without pause.

As Sheila begins to imply that she’s had enough of this life, Gloria spares no time in deflating that dream. Sheila has been trained and whittled down to a killing machine for over a decade, now barely able to feign human connection to a boyfriend kept in the dark about her work. She’s a tool at her family’s disposal, fully integrated into the free market and its commodification of life. Whether she’s willing any longer is the lingering question. The ultimate banality of murder to her is just another fact of life, but any attempt to leave the business is tantamount to leaving the family. How do you make sense of murder when it’s your line of work? When it’s a family tradition? When “carpe diem” is less mantra than warning?