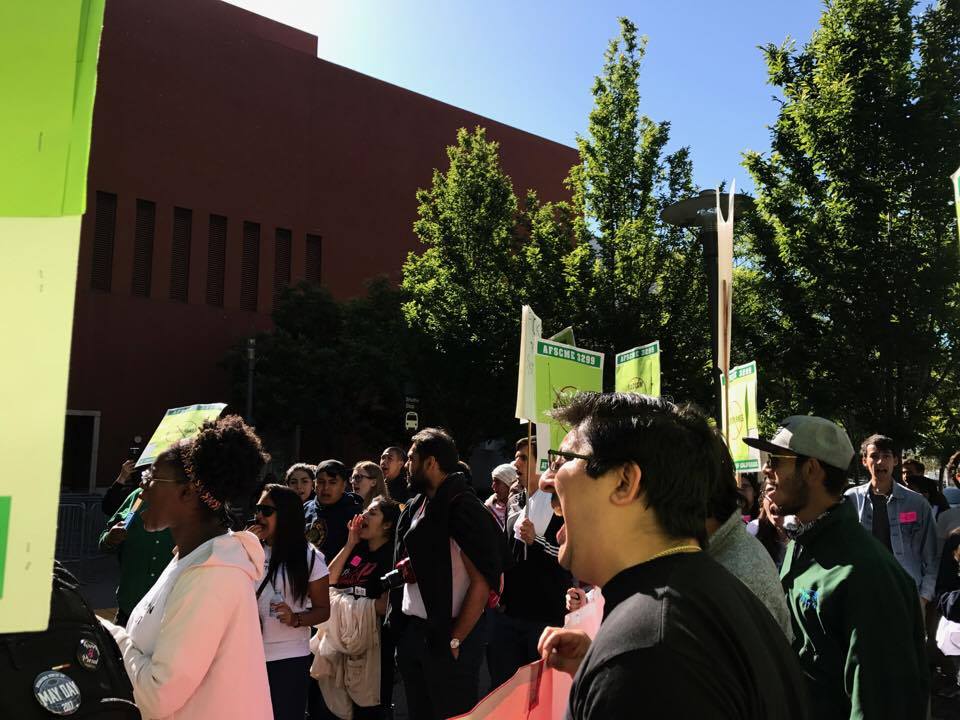 The night before the UC Board of Regents voted on Jan. 26 to raise tuition by $282 for the 2017–18 academic year, the university officials hosted a $17,600 dinner party for themselves in San Francisco attended by 65 people, placing the cost at $270 per attendee, the San Francisco Chronicle reported on May 28. According to the Chronicle, the UC Office of the President has reimbursed the regents for $225,000 in dinner parties, which have occurred four to six times annually, since 2012.

More recently, the regents spent $15,199 on a dinner party at the San Francisco Palace Hotel at the university’s expense on May 17. At $258 a head, the event came just hours after students from around the UC system protested for free tuition and liveable wages outside the regents’ meeting held that day at UC San Francisco.

A.S. President Lesly Figueroa, who attended the May 17 demonstration, told the UCSD Guardian that the regents’ spending is unfortunate, especially in light of the tuition hike.

“I think the regents spending thousands of dollars of university funding on extravagant parties that obviously do not benefit students is a shame,” Figueroa said. “Raising an already unaffordable tuition, making higher education more inaccesible is outrageous but, of course, not shocking because we’ve known the regents do not always have the best interest of students or workers in mind. We have students that are food and housing insecure, not being retained at their institutions or being supported to get their basic needs met and yet are still paying outrageous amounts of money to a system that does not support them. [That] is not only unjust but unacceptable.”

UC spokesperson Dianne Klein defended the dinner parties to the Chronicle, stating that they are a longstanding tradition financed by private funding given to the university.

However, several regents spoke out against the dinners, with some saying that the attendees should be responsible for the cost of the events themselves as opposed to placing the burden on the university.

Regent John Perez, who believes that the guests should finance the parties, told the Chronicle that spending should prioritize students over dinners.

“We shouldn’t use money (for dinners) that could be used for students,” Perez said. “Lavish meals are not the ‘highest, best’ use.”

Regents Dick Blum, Lt. Gov. Gavin Newsom and community college Chancellor Eloy Ortiz Oakley also expressed their dissatisfaction with the price of the dinners, using words like “inappropriate” and “high” to describe it.

Eleanor Roosevelt College sophomore Yasmine Saraf explained her discontentment that the regents are spending students’ money on themselves.

“I feel that as a student for the greater part of my life, we’re taught the appropriate values of justice and authenticity,” Saraf told the Guardian. “However, knowing that the UC regents are using our tuition money for their own purposes instead of bettering the school, leaves me confused and outraged. I propose that the dining halls should be enhanced to accommodate for our own dinner parties as well.”

Figueroa added that in light of the Chronicle’s findings, students should mobilize against the regents and UC President Janet Napolitano.

“Moving forward, this creates a pivotal moment for students at their institutions and here at UCSD to push against these reckless decisions of university spending and urge the regents and Napolitano to commit to supporting student and workers needs because without students and workers then the institution does not function,” Figueroa said. “These are times when we have to push collectively in order to shift the current system into a student and worker serving institution.”

According to the Chronicle’s report, the parties cast doubt on the the integrity of the regents’ spending policy because UC rules restrict dinners to $81 and prevent “lavish or extravagant” entertainment expenses. The events also create the impression that “Napolitano’s office reimburses the regents’ expenses, and the regents approve the budget for Napolitano’s office.”

The Chronicle learned of the regents’ dinner parties from documents produced by the California State Auditor’s Office after State Auditor Elaine Howle released a report criticizing UCOP for overpaying its executives and hiding $175 million in discretionary reserves.

Other parties thrown by the regents include a $15,600 party in March 2013 while the university was “working to weather the financial crisis,” an $8,800 dinner party in November 2014 when the regents were deciding whether to raise tuition by 28 percent over the next five years and a retirement party for two regents in January 2016 that cost $227 a head and $13,600 overall.