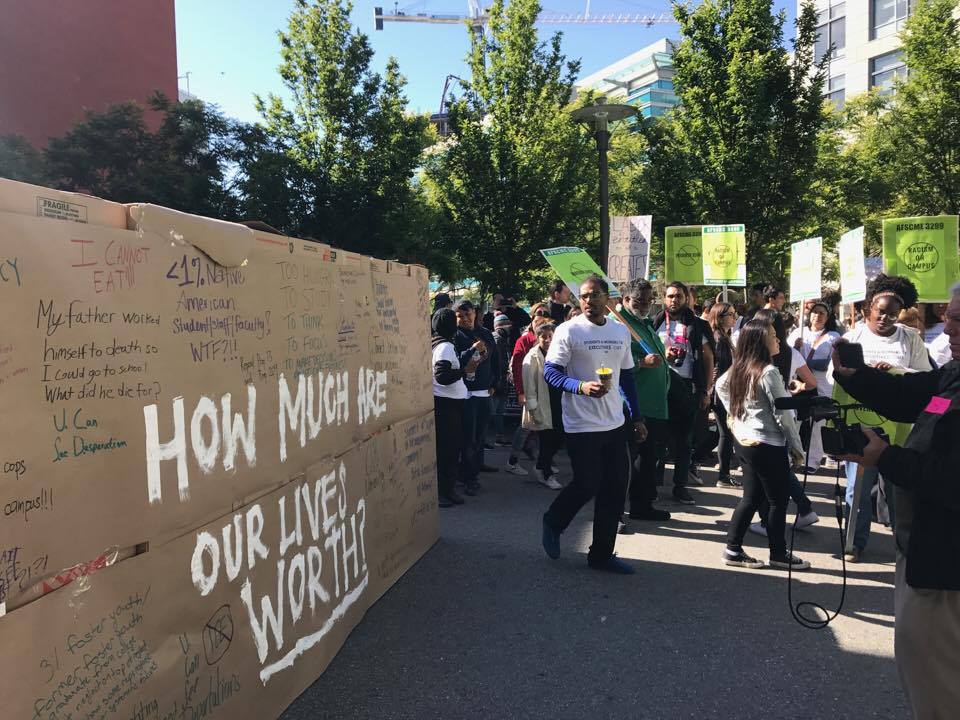 UC San Diego students and members of the A.S. Office of External Affairs protested outside the UC Board of Regents meeting in Oakland on May 17, demanding a freeze on the tuition increase scheduled for next year in light of the Office of the State Auditor’s report stating that the UC Office of the President has $175 million in discretionary reserves that it kept hidden from the state. The meeting and demonstration came almost one week after Gov. Jerry Brown requested in a revised budget proposal that the state legislature sequester $50 million from UC funding until UCOP has fulfilled the recommendations made by the auditor’s office, along with other commitments.

Blocked by a police barricade from entering the Mission Bay Conference Center where the meeting took place at UC San Francisco, protesters from External Affairs, students from other campuses and organizations like American Federation of State, County, and Municipal Employees 3299 gathered in front of a “wall” made from a large sign propped up by cardboard boxes that read “HOW MUCH ARE OUR LIVES WORTH?” with statements on issues like sexual assault cases that the administration has failed to address. The wall, which UCSD Vice President of External Affairs Nicolas Monteiro said was meant to represent “the ways in which the university has institutionally kept us, students and workers, out of making decisions,” was ultimately knocked down to symbolize that the demonstrators will persist until their demands are met.

The protesters held signs denouncing student poverty, the presence of Immigration and Customs Enforcement on campuses and could be heard intermittently chanting phrases such as “Whose university? Our university” and “We’re fired up! Can’t take it no more!” One by one, students and UC staff took the microphone to give speeches and share their experiences.

Monteiro explained to the UCSD Guardian that he felt it important for his office and UCSD students to demonstrate at the meeting because the university was dishonest with its students.

The outgoing vice president further noted that throughout the audit, UCOP was lacking in transparency, and the protesters wanted to remind the administration that students and staff are monitoring their actions.

“UCOP interfered in the audit process making me question the transparency, integrity, and leadership of the executives making decisions on behalf of students,” Monteiro stated. “Lavish dinner parties costing up to a year’s worth of tuition is not where taxpayers’ money should be going. This was a demonstration to show UCOP we are paying attention; it is about demanding space for students and workers to be included in decisions at the UC.”

According to Kelly Morris, who leads UCSD’s Fund the UC campaign to improve how the university is financed, protests will not solve all of the UC system’s funding problems alone, but they do show cohesion on the issue.

“Prop 13 reform (which is the center of Fund the UC) and efforts to decrease the cost of a UC education will not happen as a result of public demonstrations, but they can help guide us toward more consequential conversations and more success at the bargaining table,” Morris told the Guardian. “They both display and cultivate solidarity and support for the cause.”

Inside the meeting, incoming Vice President of External Affairs Refilwe Gqajela made a statement to the regents during the public input section, declaring that the “hidden” $175 million serves as evidence that such policies like free tuition could exist.

“When news of the $175 million that was hidden by the UC and uncovered by the state broke, there was great outrage, but not shock,” Gqajela said. “This news revealed what students and workers have known all along. Living wages are possible. A tuition for UC is possible. As my predecessors at UC San Diego have proclaimed since 2010, another university is possible.”

However, Morris notes that the Regents do not appear to be receptive during the public input sessions, which is another reason why protest is important.

“In the case of Regents meetings, the time for public comment is not only disappointingly short but also very distant from the Regents: It can feel as though they literally aren’t listening at times (some were on their phones or looking down, for example), and they leave the room immediately after it is over,” Morris stated. “So public demonstrations can be the most powerful way to get a point across in that case.”

Action in response to the audit has been taken at the state government level as well.

With support from California State Assemblymember and Chair of the state’s Assembly Higher Education Committee Jose Medina, Gov. Brown proposed on May 11 that the state withhold $50 million of the approximately $3.5 billion the legislature annually appropriates to the UC system to reinforce the audit.

Member of the California Legislative Analyst’s Office Jason Constantouros told the Daily Cal that the UC system will receive the sequestered money only after three conditions are met: UCOP completes State Auditor Elaine Howle’s recommendations for the Regents and the university as a whole prior to April 2018, the university finishes “the piloting of activity-based costing across three university campuses to help the state and university better assess and reevaluate the cost structure of the UC” and UCOP demonstrates that almost all campuses are on course to enrolling one transfer student for every two incoming freshman by the 2018–2019 school year.

The next Board of Regents meeting will be at UCSF again on July 12 and July 13.