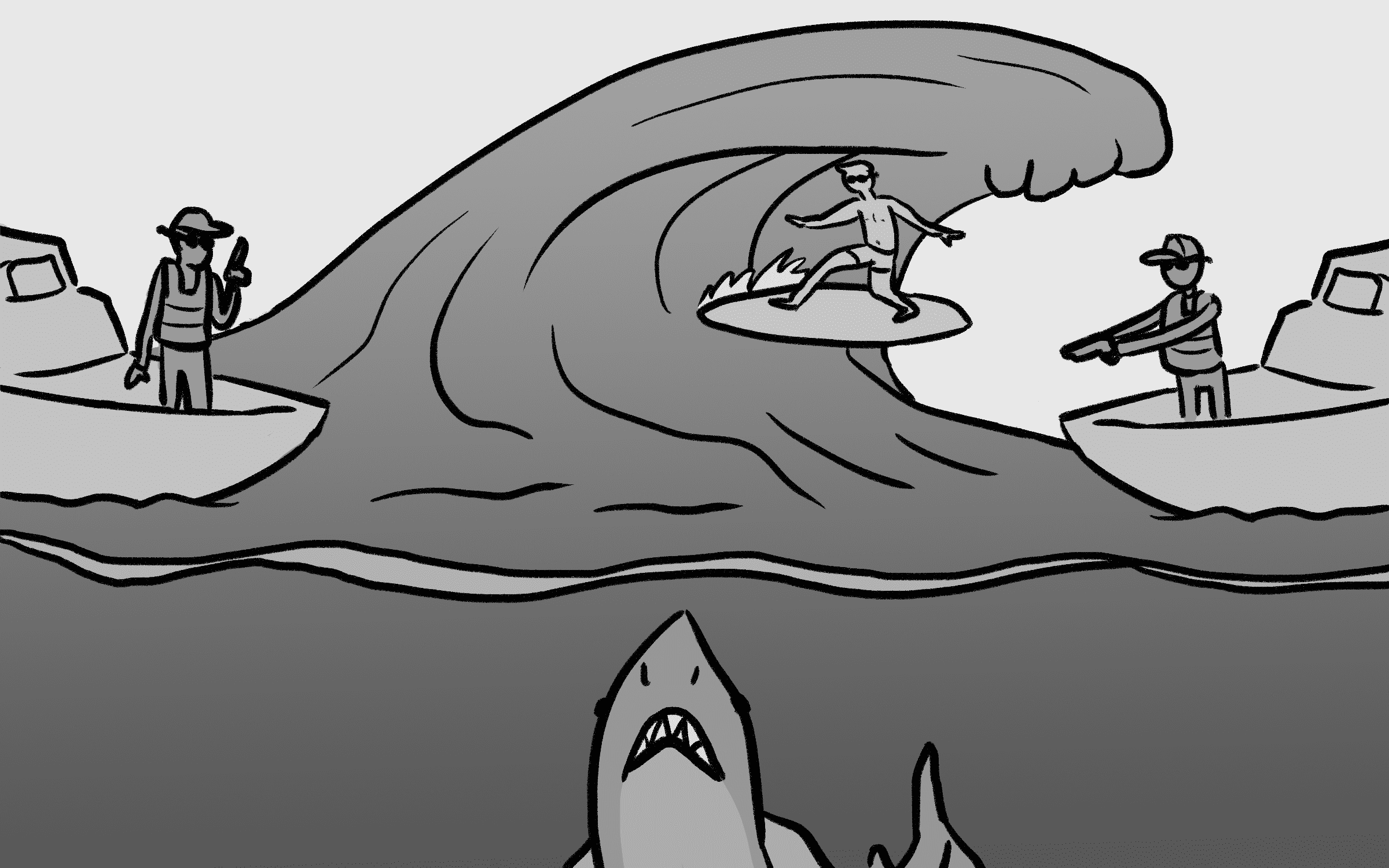 Twenty people attacked, eight fatal: these are the stats for unprovoked shark attacks since 2011 on Reunion Island, a small island and region of France located off the southeast coast of Africa. The ocean around this island has always been known to have a notoriously high shark population, but since the recent death of Alexandre Naussac, a 26-year-old bodyboarder, professional surfers and Reunion Island locals have ignited a global debate on whether or not actions need to be taken regarding the shark population on the island, and, more largely, the importance of prioritizing ocean and marine life conservancy.

The debate gained new levels of publicity when professional surfer and 11-time World Surf League Champion Kelly Slater called for a “serious cull on Reunion” in an Instagram post tributed to Naussac. A cull would entail the systematic capture and killing of sharks in the vicinity of swimming beaches by local governments. Although Slater recently released a new statement clarifying that his assertion was an emotional reaction to Naussac’s death and that he does not believe a cull is the proper solution, his statement still came as somewhat of a shock to the surfing community. Slater is not only an advocate for ocean conservancy, but a founder of Outerknown, a company that donates all profits from its “It’s Not OK” shirts to ocean conservancy and recently released a video of Slater arguing the importance of protecting the ocean and its marine life. Jeremy Flores, another professional surfer who resides on Reunion Island, made similar claims for the need to tackle the shark population on the island. Yet, to some extent, the problem is already being tackled. According to International Business Times, French officials already kill 100 sharks annually on the island, prompting conservationists to fear that killing more will only further imbalance the ecosystem.

In fact, according to the Australian Marine Conservation Society, culling has even been scientifically proven to not work. U.S. surfer Mike Coots, although having lost a leg in a shark attack, has himself argued that “culling a species is fundamentally wrong” and that “it can actually make the situation worse.” Shark nets and traps not only endanger other species, but also victimize shark species that may not be the target of the nets. These species are typically already endangered, such as in Queensland, Australia, where 97 percent of sharks caught since 2001 by drum lines (a baited hook) were at conservation risk and 89 percent were caught in regions where no human fatalities had occurred by shark attacks. According to Surfer, miles of nets have been put in place to keep sharks at bay in particularly dangerous surf spots, like Lighthouse Beach in Australia and beaches like those in Queensland. This precaution, however, has resulted in thousands of deaths to sharks since they were installed, although dramatically reducing the number of shark attacks in the region. It’s difficult to claim that our sports and leisure are more important than protecting a diminishing species, and yet compromises to the problem seem to be scarce. Alternatives such as aerial and coastal surveillance, shark barriers and sonar trials have become more popular methods of handling high shark populations, but some alternatives such as “smart drum lines,” which alert authorities when marine life has been caught and therefore can allow time for the animals to be freed, continue to capture and threaten unintended species. One solution, however, may be in sight — the Sea Shepherd, a nonprofit marine conservation organization, has begun working with Slater to advocate for a marine reserve that will promote the return of reef sharks, which deter the bull sharks that have been behind the recent attacks.

When it comes down to it, we have to ask ourselves: Should we be more concerned about our safety and our ability to be in the ocean, or about ocean conservancy? Humans are estimated to kill over 100 million sharks every year — that’s 11,417 sharks every hour, by conservative measures. Yet, according to statistics spanning the past decade, only an average of six people are killed by shark attacks each year. You’re more likely to be killed by being crushed by a falling vending machine than being attacked by a shark — seriously, vending machines kill 10 to 13 people a year. While shark attack rates have certainly been increasing in recent years, we have to realize that human impact on climate change and subsequent rising sea temperatures also bring larger congregations of sharks in coastal regions where before their numbers remained low. As these changes occur, it may be necessary to scope out new surf and swim spots or follow extra precautionary measures to prevent an encounter with a shark.

This relevance of ocean conservancy and determining whether to protect humans’ rights or animals’ remains vividly active in our own local community as well. Consider the sea lions of La Jolla Cove, whose presence has long sparked debate over whether they should be removed or not. Statements from the La Jolla Cove Swim Club have argued that they should be dispersed from the area or at least prevented from accessing the beach and stairs where people often go. Moreover, the sea lions cause ocean contamination from the large amount of fecal matter they emit. People have been attacked by the sea lions and swimmers have gotten sick from the high level of bacteria in the water due to their presence. Yet others argue that the Cove is the sea lions’ natural breeding ground, and they have more of a right to live there than humans do to go to the area. The debate brings light to a complex issue of how much ocean conservancy should be prioritized and how far humans should go to defend their rights to be in certain coastal territories and waters. As with the sharks, is it time for the animals to relocate or for the humans to find a new place to relax at the beach?

Despite our love of the water and our passion for catching the deepest barrels we can possibly find, it’s important to remember that every time we step in the water, we are putting ourselves at the will of the ocean and all of the life it contains. For some, the chance of losing a limb by a shark might be worth catching a perfect wave — for others, the risk means giving up the sport or finding a new place to surf. Regardless, it seems to be our duty to do our best to protect marine life and not further endanger a species already at risk. Keep in mind: We already kill far more of them than they ever have and will kill of us.