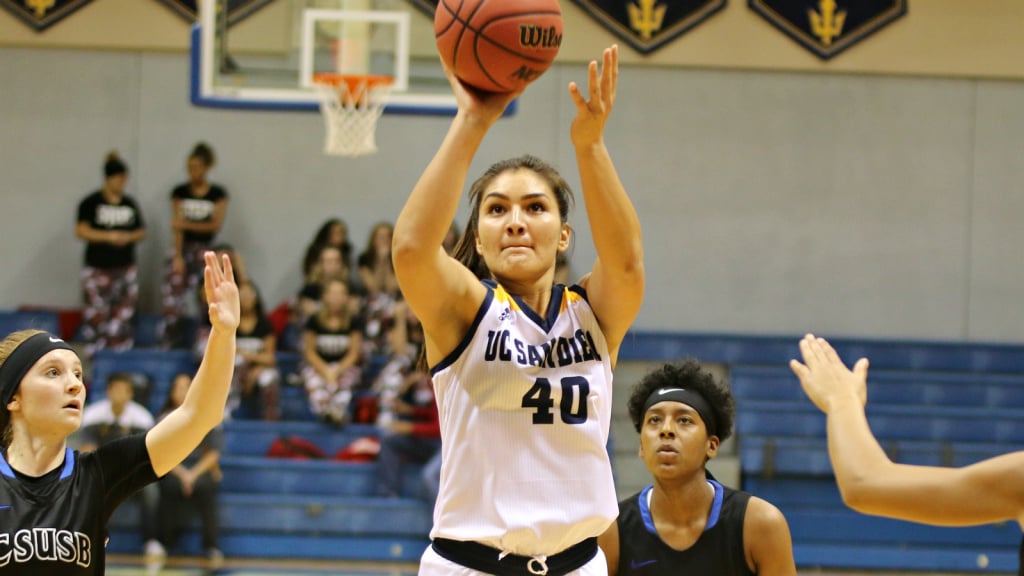 The UC San Diego women’s basketball team went up against Cal State Dominguez Hills last Thursday. The Tritons beat the Toros with a score of 67–49. The victory of CSU Dominguez Hills improved UCSD’s conference record to 14–2. With this record, UCSD remains at the top of the California Collegiate Athletic Association standings.

In the second quarter, UCSD built a lead that it would maintain until the end of the game. A jumper by sophomore forward Shandiin Armao followed by two consecutive three-pointers by freshman guard Sydney Sharp propelled UCSD to a 12–20 lead. The Toros were held scoreless up until the 0:50 mark of the second quarter when junior forward Joselyn Diaz sank two free throws from the line. On the other side, the Tritons would score through a flurry of jumpers and layups to give them a 14–31 lead going into halftime.

CSU Dominguez Hills found its scoring groove in the third quarter, amassing 19 points to UCSD’s 15 points in the quarter. However, in spite of all its efforts, the closest CSU Dominguez Hills ever got to overcoming the Tritons’ lead would be at the 3:29 mark, when Toros senior guard Lisa Rhett hit a jumper to bring the game to 28–40.

The final quarter of the game saw UCSD grow its lead to a 25-point margin. Two free throws by Yang brought the score to 63–38 at the 3:46 mark. By then, it was clear that the game was over.

“I am very proud of our win tonight,” head coach Heidi Vanderveer said. “I thought we competed well, and it was an excellent team win. We will carry this momentum into Saturday’s game against Cal State LA.”

The UCSD women’s basketball team traveled up to Los Angeles last Saturday to face up against Cal State University Los Angeles. The Tritons were handed a 69–75 defeat, bringing their CCAA conference record to 14–3.

The teams looked evenly matched in the first quarter; neither team could build more than a three-point lead. The final minute of the quarter would see a steal by sophomore guard Joleen Yang turn into a three by freshman guard Sydney Sharp, bringing the game to 14–16. Cal State LA countered with a buzzer-beating layup by sophomore guard Christine Delapina to tie the game at 16–16.

The second quarter saw Cal State LA develop a 15-point lead early on in the quarter. UCSD went on a run to bring the game to 37–35 right before halftime with an and-one by senior guard Beth Mounier. Going into the second half, it was anyone’s game.

The score stayed within a five-point margin for the majority of the third quarter until Lee hit a three-pointer to put the Golden Eagles up 50–43. Cal State LA increased its lead to 11, but UCSD answered with a layup by junior forward Dalayna Sampton with 0:32 left to cut the deficit to seven.

UCSD continued to fight in the fourth quarter, trying its best to catch up to Cal State LA. The closest the Tritons got to tying the game was 65–60 at the 2:59 mark when senior forward Cassie MacLeod put back her own missed jumper. UCSD was unable to come that close for the remainder of the game, and Cal State LA would take the game 75–69.

“I thought we had a good week of preparation,” head coach Heidi VanDerveer told the Athletics Department. “The outcome wasn’t what we wanted; we didn’t make plays when we needed to, but I thought overall we had good energy from some different players and we will continue to work hard to get better.”

Mounier scored a game-high 24 points; she seemed to have the hot hand for the Tritons, going 5–10 from behind the arc. Sampton earned her third double-double of the season, putting up 20 points and 12 rebounds.

The Tritons will come back home to host Cal Poly Pomona on Friday, Feb. 17 and Humboldt State on Saturday, Feb. 18. Tipoff for both games is set for 5 p.m.