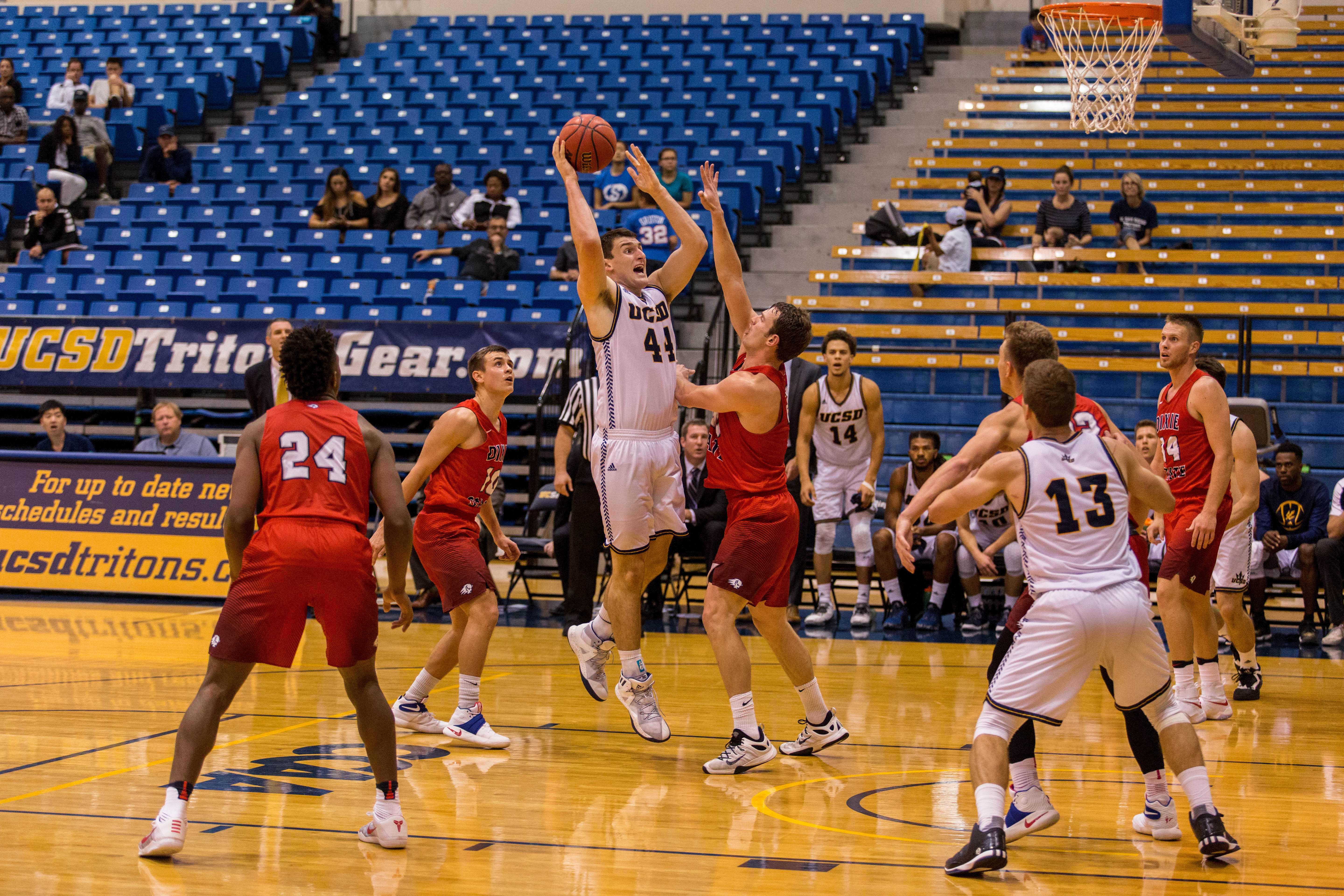 The Tritons got off to a quick start, leading by 19 points with 6:56 left in the first quarter. Senior guard Adam Klie’s three-pointer solidified that lead for the Tritons, and they never looked back as they led for the entirety of the game. Their defense was not too shabby either; they did not let Dixie State University score until eight minutes in. Perhaps the Trailblazers couldn’t handle the heat, as they turned over the ball six times within the first 12 minutes and missed 11 out of their 12 first shots. By the end of the first half, the Tritons had a comfortable 41–28 lead.

Although Dixie State bounced back in the second half, outscoring the Tritons 27–21, it was too late. The Trailblazers’ junior guard Trevor Hill humbled the Tritons a bit, however, when he dunked the ball and closed the gap to 58–55 with 1:55 left in the game. Unfortunately for them, those were their last points scored, as the Tritons made a layup and a couple of free throws to win the game 62–55.

Sophomore center Chris Hansen earned a double-double with 14 points and a career-high 13 rebounds. Klie also had a reputable night, scoring a team-high 16 points and also recording eight rebounds, four assists and a block. Sophomore guard Christian Oshita, who just transferred from the University of San Diego, represented UCSD well in his first game by scoring 11 points.

“We had a good overall effort through the whole game,” Klie told the UCSD Athletics Department. “We expected to be really good defensively, and I think we showed that we can do that tonight. I thought we really competed, and that’s what we expected from our guys tonight. When they started to make that run, we didn’t collapse on ourselves. We just kept moving on and kept trying to get stops. And we did that and came out on top, so that’s good.”

The Tritons played a litigious game, committing 27 personal fouls. Dixie State outscored the Tritons at the free-throw line, amassing 22 out of the team’s 32 shots. But overall, the Tritons shot 36.1 percent (22–61) while Dixie State was only at 27.6 percent (16–58).

In their first matchup since 1996, the Tritons narrowly beat Azusa Pacific University 70–67.

The Cougars had an early lead, as they were up by eight points at 11:22 in the first half of the game. This lead was short-lived, however, as redshirt freshman guard Ben Rico scored a three-pointer to tie the game 26–26. Again, Klie solidified a lead for the Tritons with a layup. At halftime, the Tritons led 34–29.

The Tritons hit the ground running at the start of the second half, scoring eight points within the first three minutes, extending their lead to 42–29. The Cougars’ junior forward Petar Kutlesic scored 21 of his 26 points in the second half to give the Tritons a run for their money. With only three seconds left, the Tritons led 68–67, but a pair of free throws by junior guard George Buaku sealed the Tritons’ win at 70-67.

Going 9 for 14 in shooting, Klie led the Tritons with 20 points. He also tied his career-high seven assists, while also earning five rebounds, two steals and a block. Also noteworthy, Hansen and Buaku accumulated 16 and 10 points, respectively, for the Tritons.

“[Klie’s] usage is high for us,” head coach Eric Olen said. “When things break down, we have him go get it. He’s committed to the defensive … [and] he gets rebounds for us, and he creates offense for others. He does a lot for us.”

“It’s a very good win for us,” Olen continued. “It’s a really good team. I think they were picked second in the PacWest, which is a good league just like ours. It was a real good test for us … we were fortunate to come out with the win.”

The Tritons will next host Point Loma here at UCSD on Tuesday, Nov. 15, at 7 p.m.