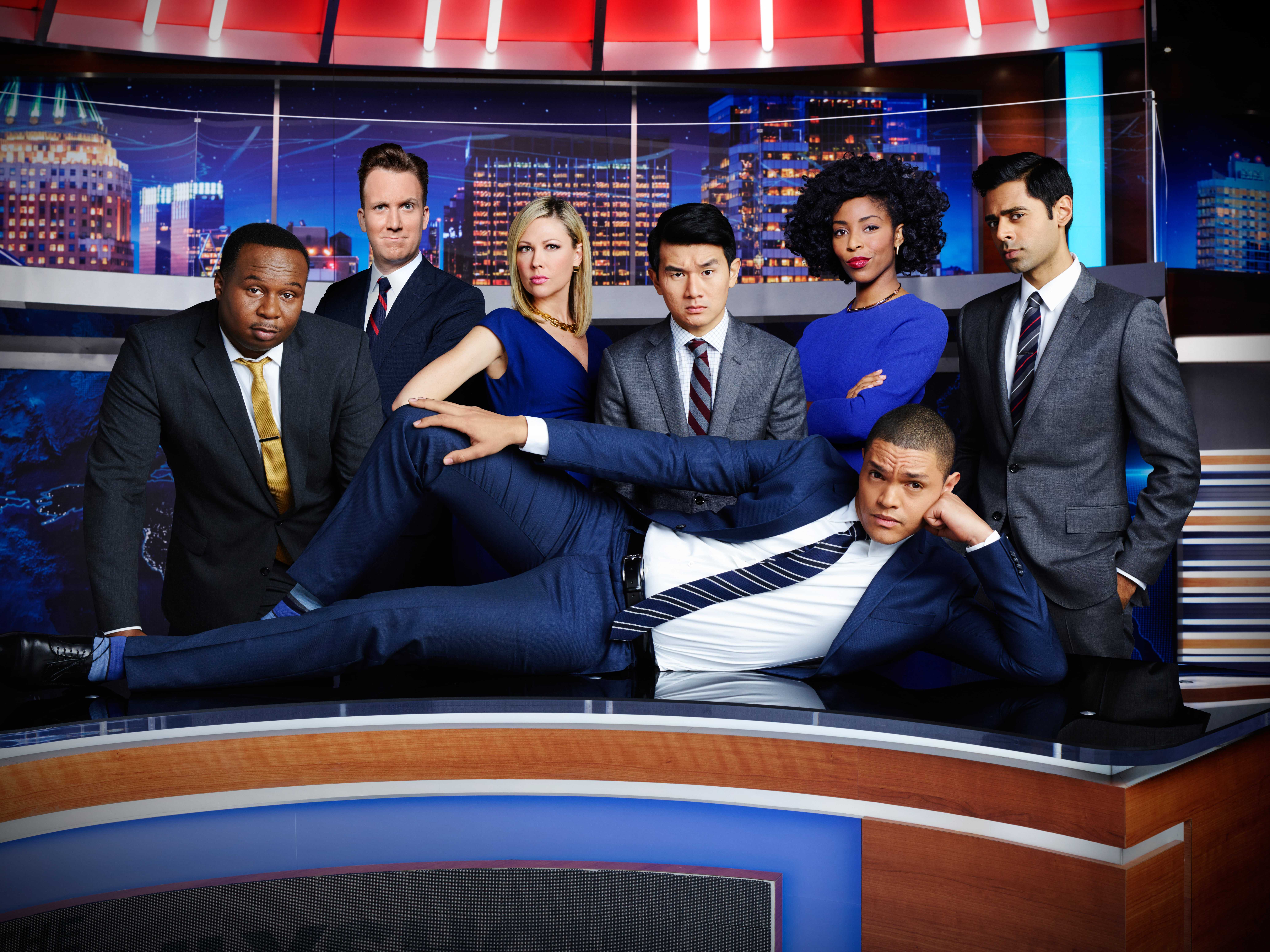 Hasan Minhaj and Roy Wood, Jr. are correspondents for “The Daily Show with Trevor Noah” and members of its “Best F#@king News Team.” Minhaj has been on the program since 2014, when Jon Stewart was the host, while Wood joined the staff more recently in 2015. The two got on the phone to talk to one of our writers, Jacky To, as well as college journalists from across the country to talk about the election, their show’s coverage of it and the ethics of comedy.

How are you guys using comedy to make this election a little less heavy? (Boston University, The Daily Free Press)

Roy Wood, Jr.: I think comedy is important to help keep the sanity in the midst of all this because, otherwise, we look up and it’s literally a madhouse. The beauty of comedy is that it reminds you that you’re not alone in feeling a certain way. You just laugh with people.

Hasan Minhaj: You know what was crazy? When we were at the DNC, when I saw E! News and VH1 there, it was wild that political culture has become popular culture. That wasn’t always the case. It was never a thing that E! News would be covering [a political convention].

RW: At least in my experience — Hassan can speak to the Jon Stewart-regime — for me, it was kind of just crafted as you go along because you talk with the writers and your field producers and the field department and you try to get a feel for the stories that are important to you and what your comedic style is, and the two things eventually start going together.

HM: I would agree with what Roy is saying. Every day, we’re building a new show, and so it happens pretty organically. You continue to pitch and you continue to sort of shape the story you’re really passionate about. It’s interesting. We do, whatever it is, over 200 episodes of television a year, so we organically find those pieces and those segments that we’re really passionate about. That’s really great to get that opportunity because of quantity.

How do you navigate race humor, both in writing it and performing it, without being overly inflammatory while still actually making an effort to cover its more sensitive topics? (University of Rochester, Campus Times)

RW: If somebody gon’ be mad, they gon’ be mad, man. I choose not to concern myself with that. For me, where race humor is concerned, on the show and on stage, it’s not so much about the perspective of “I’m right, you’re wrong” as much as it is about finding that third point of view. For me, the issue is not, should Kaepernick take a knee or is it disrespectful to the national anthem; for me, that’s not the discussion. The discussion is, who are these people that are shocked that black people have issues with the country? For me, where race has always been concerned, it’s been about trying to find the ridiculous point of view, not necessarily the right point of view, and let’s talk about that.

HM: Obviously, it varies from issue to issue, but I think, in general, society has progressed in a positive way. When people are saying they can’t say the same words that they said before, yeah, you can’t call a certain minority group those slurs, you can’t call women this slur. Learn different words! Become a better debater and communicator. I’m sorry. You have to learn how to communicate your problems and grievances now, and I think that’s a good thing. I have no problem with you expressing your concern towards me or any other group for that matter. Just do it in an eloquent way.

How does being a minority in the arts and entertainment industry shape your work and how you approach your work, especially with the current push for diversity and representation in media? (Stanford University, The Stanford Daily)

RW: I feel like I have a responsibility to make sure that I’m doing my job well because I don’t know who I’m being judged by or who’s using me as a thermometer for my race as a whole. That’s one of the issues of being a black person in a white space sometimes, is that you don’t know how much of what you’re doing is influencing other people’s stereotypes about your race. I also feel like I have a responsibility with this platform to not solely do this, but when the opportunity presents itself, tell stories that I feel like should be told about my race or things that are important to me.

In an election as divisive as this one, how essential do you think political comedy shows are? (Lehigh University, The Brown and White)

HM: I think the rising popularity of political satire is due to the fact that we’re basically comedic synthesizers. Basically what we do is take really, really complicated information, break it down and pepper in really funny stuff. To give you a college analogy, we’re essentially like funny history professors. For people who don’t have time to sift through everything on WikiLeaks — they got things to do — they can tune in to The Daily Show and we will sift through all that stuff and be like, “Hey, here are the main things that came out” and there’ll be some jokes along the way, so it will feel like less of a chore. Political satire and investigative journalism: I think those two things are rising together.

Should millennials vote? If so, what are you going to do to encourage them to vote? (Seton Hall, The Setonian)

HM: This democracy thing, do not take it for granted. We are a very lucky 350 million people of the 8 billion people on this planet; don’t take it for granted. I know you wanna crack jokes about your filters on SnapChat, but shit is not funny in Syria, this shit is not funny in Aleppo, in Pakistan, in places where, literally, elections just get rigged. So despite the leaks, despite all the stuff that you’re reading about — it is a flawed system — but it’s the best operating system currently in the market where there’s tremendous flexibility for change. America’s lack of rigidity is pretty dope, and we’re living probably in one of the greatest social experiments of the past 300 years called American democracy. Please do not take it for granted and just be on Pokemon GO all day. Please, because there are plenty of kids that would love to switch spots with you. You can quote that.

What do you think about third parties and third-party candidates in this election? (Ohio State University, The Lantern)

RW: I think third parties matter. I think a two-party system is a very narrow-minded way to conduct elections. I don’t necessarily buy into the notion that they throw elections, like “oh, if this third party guy hadn’t run, then the Democrat would’ve gotten in.” I think third-party candidates, if nothing else, bring attention to issues that the other two parties may have left alone. Anybody with bright ideas should be welcomed into the election, at a minimum, invited to the debates. That’s what I feel really bad about third-party candidates is that, they can’t even get a seat at the table to have a conversation because the news network has decided that you aren’t relevant enough. Well, let the people decide that.

How do you guys think that Donald Trump’s rhetoric is going to affect the country after the election, regardless of who wins? (Boston University, The Daily Free Press)

HM: I really think that this election is an analogy for the Harry Potter series. Remember how in the first four books, Harry was like, “I’m telling you, Voldemort exists,” and the whole time, his teachers are just like, “You shall not say the name that shall not be mentioned” and he’s like, “I’m telling you, Voldemort is real. We just have to acknowledge it”? Voldemort is just a metaphor for systemic racism. So when Voldemort comes back and legitimizes all the death eaters, like Malfoy’s parents and all those other jerks, that really is what Donald Trump has done. He has reawakened the death eaters of America.

What do you guys think about the rise and fall of Ken Bone? (UC Irvine, New University)

Comedy Central will be airing a special one-hour live episode of “The Daily Show with Trevor Noah” at 11 p.m. PST on Tuesday night.