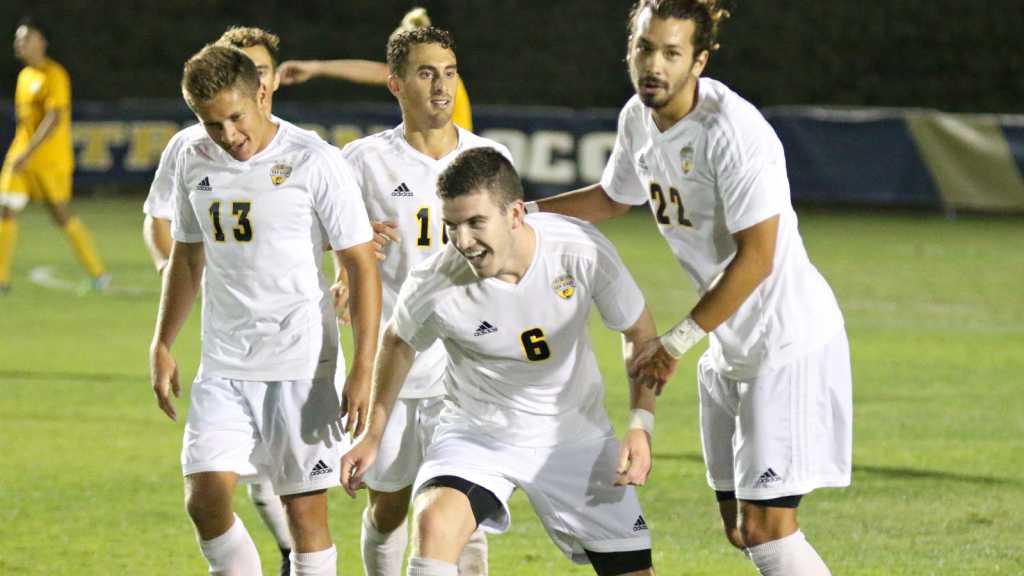 UCSD men’s soccer played at home last Friday against Cal State Los Angeles. The No. 21-ranked Tritons stunned the 12th-ranked Golden Eagles in a 1–0 upset and moved to 10–1–2 overall and 5–1–1 in California Collegiate Athletic Association. With this victory, UCSD catapulted its way to a four-way tie for first place in CCAA, while CSULA dropped to a tie for fifth.

Senior midfielder Riley Harbour scored the only goal of the game in the 35th minute of regulation. Teammate and sophomore redshirt defender Jeff Powers lofted the ball over the field toward Harbour, who was then able to come down with it within the 18 and take a shot. Although the ball was first deflected by CSULA junior goalkeeper Dan Arnoll, Harbour never quit. He managed to get the rebound and guide the ball toward the bottom right corner, making it 1–0.

The Tritons didn’t take their feet off the gas pedal even after taking a one-nil lead. Harbour again nearly scored in the 83rd minute after a through pass from senior midfielder Nick Palano. What could’ve been Harbour’s fourth goal of the year ended up sailing over the keeper and crossbar by mere inches.

UCSD’s junior midfielder Zachary Lagotta almost had a goal for himself within the last 10 minutes of play. After receiving a deep-right cross from redshirt junior forward Malek Bashti, Lagotta took on a defender. Lagotta faked going left, stumbling the defender and took a shot at the far right post, just missing the net and an insurance score.

The Golden Eagles resurged in the second half to put the Tritons on edge. However, UCSD’s fourth win in a row can be credited to redshirt senior goalkeeper Cameron McElfresh, who made several spectacular saves throughout the second half.

“This was a great win, no question about it.” commented UCSD head coach Jon Pascale. “CSULA made it tough on us at the end. I thought the guys held up really well. Cameron made a couple key saves when he needed to, and it was an all-around team effort.”

One notable play came on a free kick in the 72nd minute. McElfresh lept over Golden Eagle forwards and punched the ball away. CSULA junior midfielder Samuel Croucher took the rebound and shot a ground bullet to the far left post, only to have McElfresh make the save.

With the 1–0 victory over Cal State Los Angeles, the Tritons continue their undefeated home-game streak of eight games. They look to maintain their first-place status in CCAA this Sunday with another home and league game against Cal State Dominguez Hills at 2 p.m.