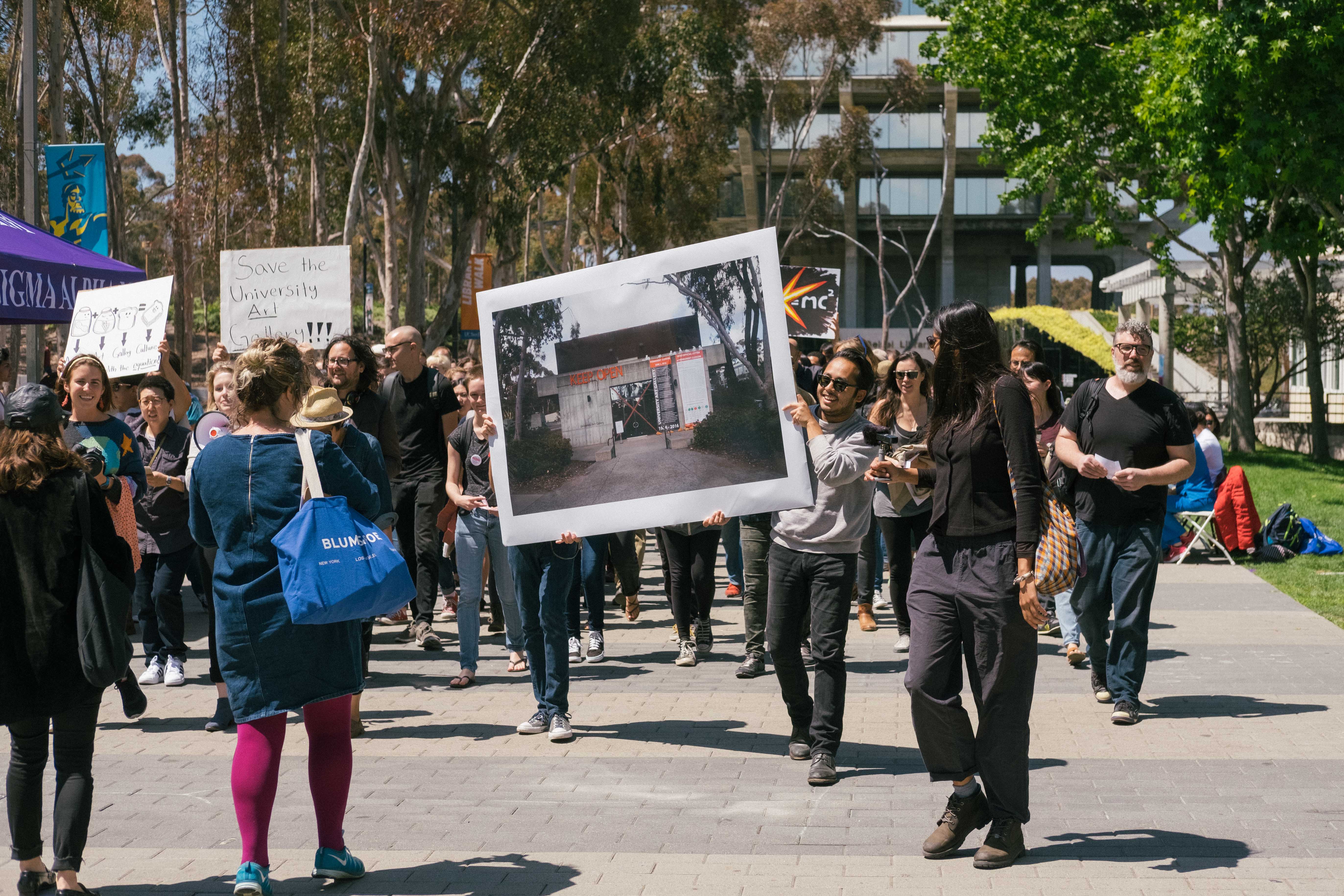 Nearly 100 members of the UCSD community gathered together last Thursday at the Silent Tree to protest the impending shutdown of the University Art Gallery and its conversion into classrooms. The mass action is a part of “Dispossessed: a call to Prayer and Protest,” a 13-day-long call to action put on by two alumni artists known as the Magpie Collective to raise awareness about the closure.

Elizabeth Stringer, the events coordinator of “Dispossessed,” told the UCSD Guardian that the purpose of the protest was to inform people about the situation, especially since the future of the gallery has been kept under wraps for so long.

“We wanted to raise awareness about both the closing and the petition and to show that we’re against it,” Stringer said. “[The gallery] has been sort of in a weird stasis point for the last year, so a lot of incoming freshmen don’t know about the UAG and I wish they did.”

University officials announced a week earlier that they are converting the gallery into a classroom in order to make up for the growing student population. Stringer, however, thinks this is not a sufficient justification for removing one of the few art-dedicated facilities left on campus.

“I don’t truly buy the fact that it’s because of incoming student numbers that we have to close this down,” Stringer said. “If that’s the only reason, then there should’ve been some sort of substitute for this massive loss of arts and culture within the university campus … It is the only major gallery on campus that allows for undergraduates to show here. We do have the Camille Gallery, but that is strictly for undergraduates. It doesn’t allow for this meeting point between faculty, MFA, visiting artists and undergraduates.”

The social media manager of “Dispossessed” Lawrence Chit told the Guardian that the loss of the gallery signals the loss of the holistic education that UCSD claims to provide.

“UCSD is meant to be this interdisciplinary, research-oriented school, and ideally, a campus like that should be well-rounded,” Chit said. “Of course, we’re making so much innovation in STEM, and that’s great, but the UAG is a huge representation of the arts and culture at UCSD.”

Furthermore, Stringer pointed out that a background in art is not uncommon among scientists and thus has a positive impact on those fields.

“A lot of big shakers and movers within all the science departments have been artists themselves,” Stringer said. “And so to ignore the fact that culture plays a part within scientific discovery, it’s a shame that’s happening.”

Revelle College freshman Cameron Norman, who attended the protest, views the gallery’s closure as another example of the university’s tendency to remove areas used for student expression.

“The closure of the art gallery is just [part of a] general pattern I see with UCSD to repeatedly close spaces that allow students to express themselves,” Norman said. “We’d like to keep open a space that all kinds of students, both graduate and undergraduate, and staff can all collaborate.”

Tae Hwang, one of the artists who comprises the Magpie Collective, told the Guardian that she hopes that the protest and the rest of the gestures will raise awareness about the closing of the space.

“We wanted this exhibition to serve as a platform,” Hwang said. “We’re using this space as a call to action, to bring attention to the art gallery’s closing. I don’t know if it’s going to change anything … [but] I at least think it is good to have some type of visibility.”

“Dispossessed: a call to Prayer and Protest” will end after 13 days on June 2 — the official closure date of the UAG.