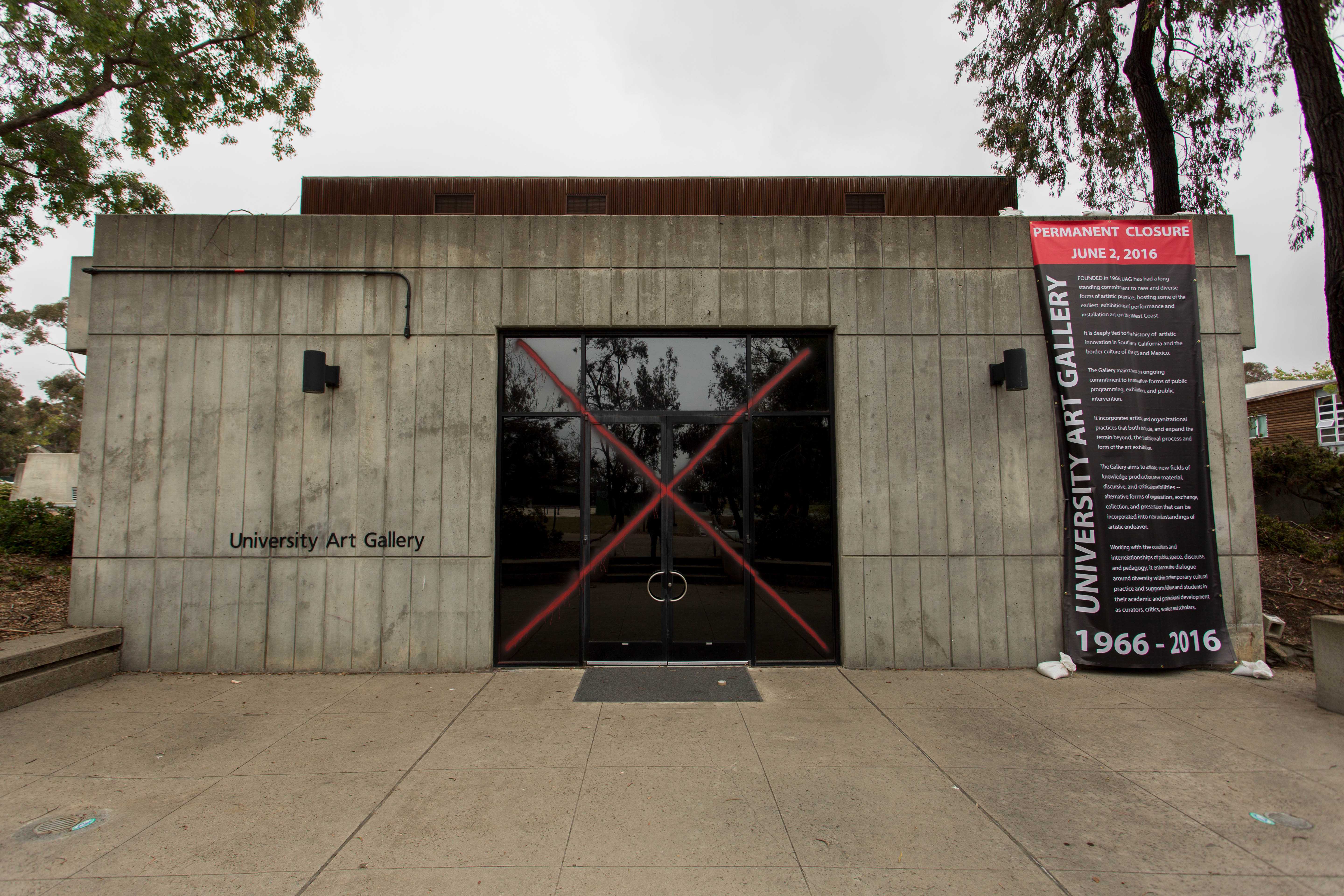 UCSD will permanently close the University Art Gallery this summer and convert it into a classroom, which will make UCSD the only UC campus without an official art gallery. Executive Vice Chancellor Suresh Subramani and Division of Arts and Humanities Dean Cristina Della Coletta made the announcement in a May 20 press release, citing the need for more classroom space as the student body continues to grow.

“Proposals to fund the gallery have been put forward recently, but the university must evaluate these options in the context of other pressing needs,” the release stated. “Since 2014-15 the undergraduate population has grown by almost 1,700. We will add approximately 1,300 students in 2016-17, and UC San Diego has a mandate to further increase enrollments in the two years that follow. Such increases impact our spatial needs on campus — more students need more classroom space. Although new classrooms are planned to come online over the next few years, the immediate need means we must repurpose existing space. The gallery space is among those sites that will serve UC San Diego students as classrooms in the near term.”

The Collective Magpie — comprised of artists and UCSD graduates Tae Hwang and MR Barnadas — are hosting a “shared gesture” at the UAG until June 2nd titled “Dispossessed: A Call to Prayer and Protest” to raise awareness about its closure, which they described as “devaluing the arts and disavowing, disrupting, and obscuring its rich artistic legacy.” The exhibit includes an “X” spray-painted across the gallery’s front door — “the cautioning mark placed on buildings indicating hazardous interiors,” according to the Facebook event page.

Furthermore, items collected from around campus will be placed inside the gallery after being “processed and marked with red ink with the dates of the gallery’s inception and closure.” Other artists will also be performing and installing their own pieces throughout the duration of the show.

Hwang spoke with the UCSD Guardian about the purpose of the exhibit, which she hopes will raise awareness regarding the closing of the space.

“We wanted this exhibition to serve as a platform,” Hwang said. “We’re using this space as a call to action, to bring attention to the art gallery’s closing. I don’t know if it’s going to change anything … [but] I at least think it is good to have some type of visibility.”

Visual arts professor Ricardo Dominguez lamented the loss of the UAG, saying that it diminishes the importance of studies not related to science and technology on campus.

Co-director of the UAG Farshid Bazmandegan told the Guardian that the gallery’s impending closure has tarnished what should have been a celebratory year as the 50th anniversary of the gallery’s opening.

Prior to Subramani and Della Coletta’s announcement, the university had put the gallery on indefinite hold last summer until reopening on May 5 for a weeklong undergraduate art show titled “Meeting at Square One.” According to Bazmandegan, over 500 people attended the show.

Chair of the visual arts department Jack Greenstein told the Guardian that he had already been coordinating next year’s shows when his superiors began to signal that the UAG was closing.

“I had been planning and working with people putting together a series of shows for next year, which we were going to ask for permission to hold, and I was discouraged from asking for that permission,” Greenstein stated.

University administrators did, however, approve his proposal to extend the duration of the undergraduate show to the end of the quarter. But by the time they did so, the art pieces had already been uninstalled from the gallery.

“While it was open, we were presented with the opportunity to move the MFA show to the Museum of Contemporary Art San Diego on Kettner St,” Greenstein said. “This seemed like an extremely good opportunity, and after consulting with some of the other faculty, we decided to go ahead and do that.”

The Facebook event page added that the visual arts department will continue to resist the closure of such spaces pertaining to its studies.

“In light of losing the university gallery and now facing the [loss of a] huge number of spaces for all of our critical research initiatives in the Visual Art Department, we as artists, as scholars and as members of the community will not sit passively while a disgraceful administration facilitates the erasure of culture.”

4 thoughts on “UCSD to Convert University Art Gallery into Classroom”