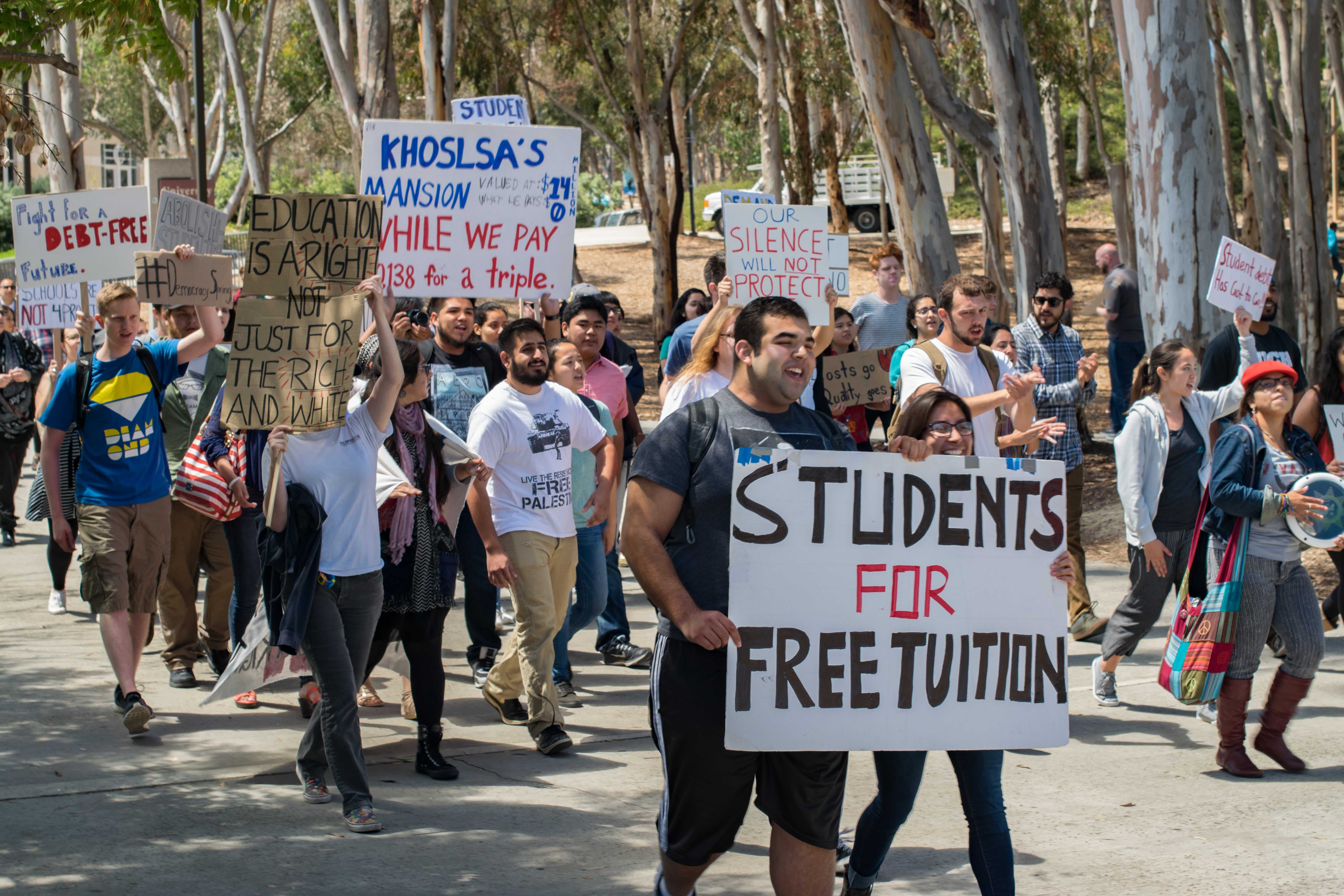 Revelle College senior and protest organizer Aman Birk told the UCSD Guardian that the protestors are aiming to inform students about their goals in order to collectively pressure UC administrators to implement them.

“Our reasons for [organizing the protest] are rising tuition, increased student debt loans, an increase of hate on campus and a lack of administration response,” Birk said. “We want to bring attention to these issues so [students] know there are others here on campus willing to fight, and from this we hope to create momentum to actually have our demands reach the Regents and the state legislature.”

Revelle junior and demonstrator Clif Pottberg explained that the objective of the march is to make students aware that they should not have to subject themselves to student debt in exchange for a college degree.

“Most people don’t realize the UC system used to be free, prior to Reagan becoming governor,” Pottberg said. “Just the fact that we’re here raising awareness that people could be paying less for the same quality of education. What we’re paying to the university is a drop in the bucket to them. For us, it’s indentured servitude.”

Birk described that the Million Student March at UCSD had demands specific to the university, which called for the administration to reduce student debt.

“For our UCSD demands, we want a freeze on tuition,” Birk said. “We want Chancellor Khosla to take a salary pay cut and put that [money] towards scholarships for student activities. On top of that, we also want that $15 minimum wage that the UC [system] passed to extend to students who work less than 20 hours a week. We believe the work of a student working part-time is just as valuable as an employee working full-time, especially considering the student load of having to study and be a student.”

The first Million Student March took place in several locations across the country on Nov. 12 of last year. According to the movement’s website, the second demonstration now puts a focus on challenging the xenophobia incited by Republican nominee candidate Donald Trump.

Birk clarified that the recent graffiti incident was unrelated to the event’s planning.

“Obviously with the recent events [the Donald Trump chalking] developed a little more impetus [for the protest] than we expected, but the incidents of this past weekend were not directly related to why we’re here today,” Birk said.

During the march, Trump supporters congregated on the path between Outback Adventures and Geisel Library waving American flags. Revelle sophomore and Trump supporter Fernando Calderon explained that their presence was meant to show the UCSD community the diversity of student opinions on campus.

“We’re here to let people know on campus there are other point of views; not just what the majority believes,” Calderon told the Guardian. “It’s important to express your political opinions no matter what they are, left or right. I personally don’t agree with [the demonstrators], but everyone is entitled to their own opinion. I just think it’s fair to show there’s another side of the coin to every issue.”

In addition, protesters found the presence of campus police at their demonstration to be unusual.

“It’s unusual that [the police] are here because they’re usually not,” Muir College senior Fabiola Orozco.

However, campus police sergeant John Smart stated that he did not intend to challenge the demonstrators’ First Amendment rights, but to guarantee safety for everyone present.

“I support the students and their ability to exercise their freedom of speech,” Smart told the Guardian. “I was there to make sure everyone was safe. For instance, if the march had gone out onto the street, then traffic would need to be stopped to ensure everyone’s safety.”