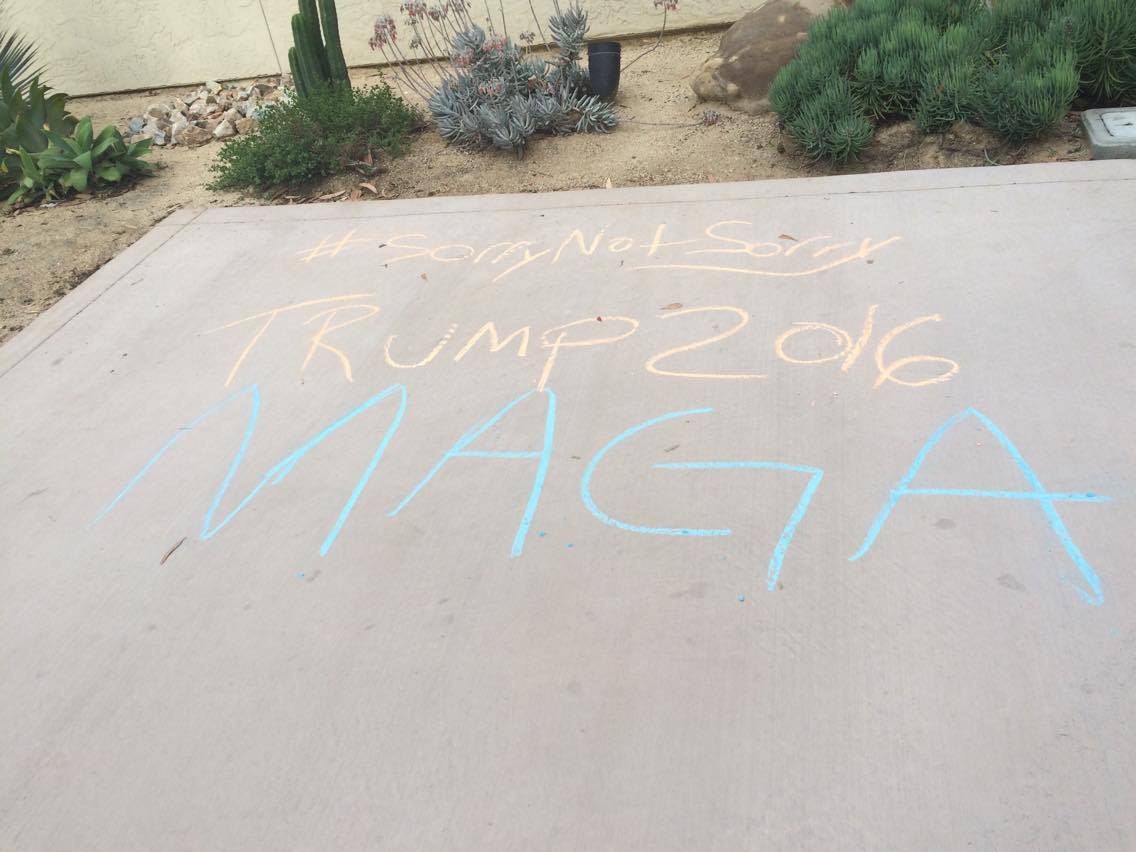 Five unidentified hooded white males vandalized UCSD with chalk statements supporting Republican presidential candidate Donald Trump and his anti-immigrant policies on April 8, CBS 8 reported. The messages — which included “TRITONS 4 TRUMP” and “BUILD THE WALL, DEPORT THEM ALL” — were written on Library Walk and the sidewalks near the Raza Resource Centro.

Furthermore, more pro-Trump statements were found written in chalk outside Peterson Hall on the morning of April 14. The chalk has since been removed.

UCSD’s Chancellor, Executive Vice Chancellor and Vice Chancellors released a joint statement following the first incident in which they deemed the content of the statements reflective of America’s “divisive political climate” and contrary to the university’s Principles of Community.

“Unfortunately, late Friday evening graffiti promoting the deportation of undocumented immigrants and the construction of a wall on the border of Mexico was discovered chalked on UC San Diego’s campus sidewalks,” the statement said. “This graffiti runs counter to our campus values of equity and inclusion. We value diversity and respect for all cultures.”

Eleanor Roosevelt College Provost Ivan Evans condemned the statement a day earlier in a Facebook post for targeting “Mexico and Latino/a students” and called upon the campus community to not give the culprits credibility.

“ERC therefore urges the campus at large to reframe this incident as an occasion to acknowledge the persistence of gross insensitivity in American society and insist on greater multicultural understanding on campus,” Evans said. “Whoever furtively inflicted this incident on campus does not deserve the attention they cannot receive through rational discourse and open debate.”

Senior Advocate for the A.S. Office of Student Advocacy Randon Herrera told the UCSD Guardian that the actions could constitute several student conduct code violations. These include, “conduct that threatens health or safety of any person” (VII.H), “verbal, written, electronic, or other threats of violence” (VII.I),  and “conduct (e.g. harassment) that is so severe and/or pervasive, and objectively offensive, and that so substantially impairs a person’s access to University programs or activities that the person is effectively denied equal access to the University’s resources and opportunities” (VII.J).