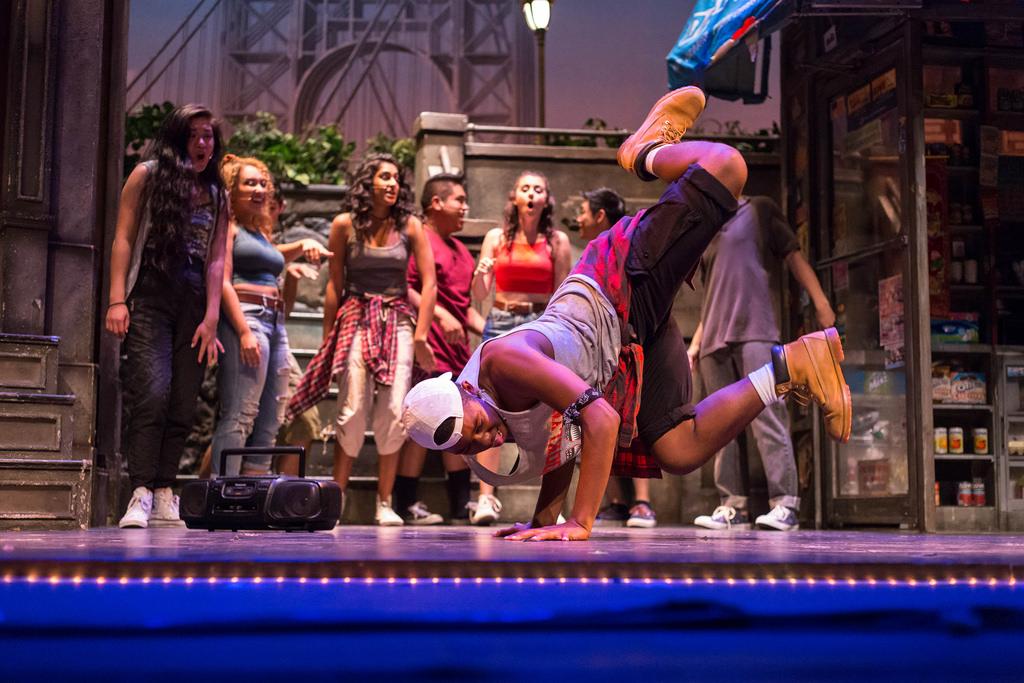 Ditch your masks, cats and hairspray — “In the Heights” is a musical for 21st-century America. Lin-Manuel Miranda, know for “Hamilton,” a rap-musical about founding-father Alexander Hamilton, presents an underrepresented side of America, all too recognizable for many UCSD students, through Latin-inspired music and internally rhymed verse.
“In the Heights” follows the antics and drama in a street in the upper-Manhattan neighborhood of Washington Heights. It should be mentioned that if you are liable to cry during musicals, bring tissues so you can quietly sob in between scenes. If you’ve never cried in a musical before, bring tissues anyway.

The action and musical expositon occurs between Rosario’s Taxi Company, the local bodega and Daniela’s Hair Salon. It follows Usnavi (Kevin Maneffa), the young Dominican bodega owner, as he struggles with money and a romance with the lovely Vanessa from the hair salon. Drama ensues when Usnavi reveals that someone on the block has won $96,000 in the lottery. Maneffa sings, acts and raps with an uncanny and delightful resemblance to Miranda, effectively channeling the “Hamilton” star. Tickets to see Miranda in “Hamilton” are through the roof, so save yourself the trip and support Muir Musical.

Usnavi is awkward and endearing, but the woman who raised him, Abuela Claudia (Reanne Acasio), proves to be the heart of the show as her relationships with the neighborhood and its residents tie the storylines together. Claudia is the kindly, advice-spouting abuela we all would want. Her motto, “Paciencia y Fe,” is good advice for any situation, but her patience and faith are challenged when she wins $96,000 in the lottery.

Meanwhile, across from the bodega, Nina Rosario (Nicole McEntee) returns from Stanford for the summer burdened by the secret that she has dropped out of college. McEntee’s performance resonates deeply with struggling students, as Nina is overwhelmed by the pressure to fit in, pay for textbooks and being away from home. After telling her father that she has dropped out, Kevin Rosario (Aaron Albanez) sings “Inutil,” which will be painfully familiar for many first-generation and Hispanic college students. In the part of Nina, Miranda not only recognizes the struggle of students, especially those of color, but also makes it something worth singing about. Despite family tensions, Nina finds solace with Benny, a hopeful employee of her father’s taxi company. Their budding romance, captured beautifully by Miranda’s lyricism, is embodied by the sweet and innocent song “Sunrise.”

After a failed dinner party with Nina’s family, Nina, Benny, Vanessa and Usnavi head to a dance club to salvage the night. Transitioning from the clunky, modern-style choreography, the dance ensemble performs the best routine of the show, a lovely salsa, to “The Club.”

Their time at the club is cut short by a sudden blackout. The following scenes set to Miranda’s “Blackout” is a credit to director, Aubrey Oxley. It is a balance between complex choreography, lighting and singing. One of the most beautiful scenes of the musical follows, as within the chaos, the ensemble stops to see Fourth of July fireworks.

Overall, Muir Musical’s production of “In the Heights” is the perfect pick for the UCSD community, providing an emotional and familiar musical experience. It comes down to representation; finally we see people of color in the limelight. And it’s your peers as the stars.