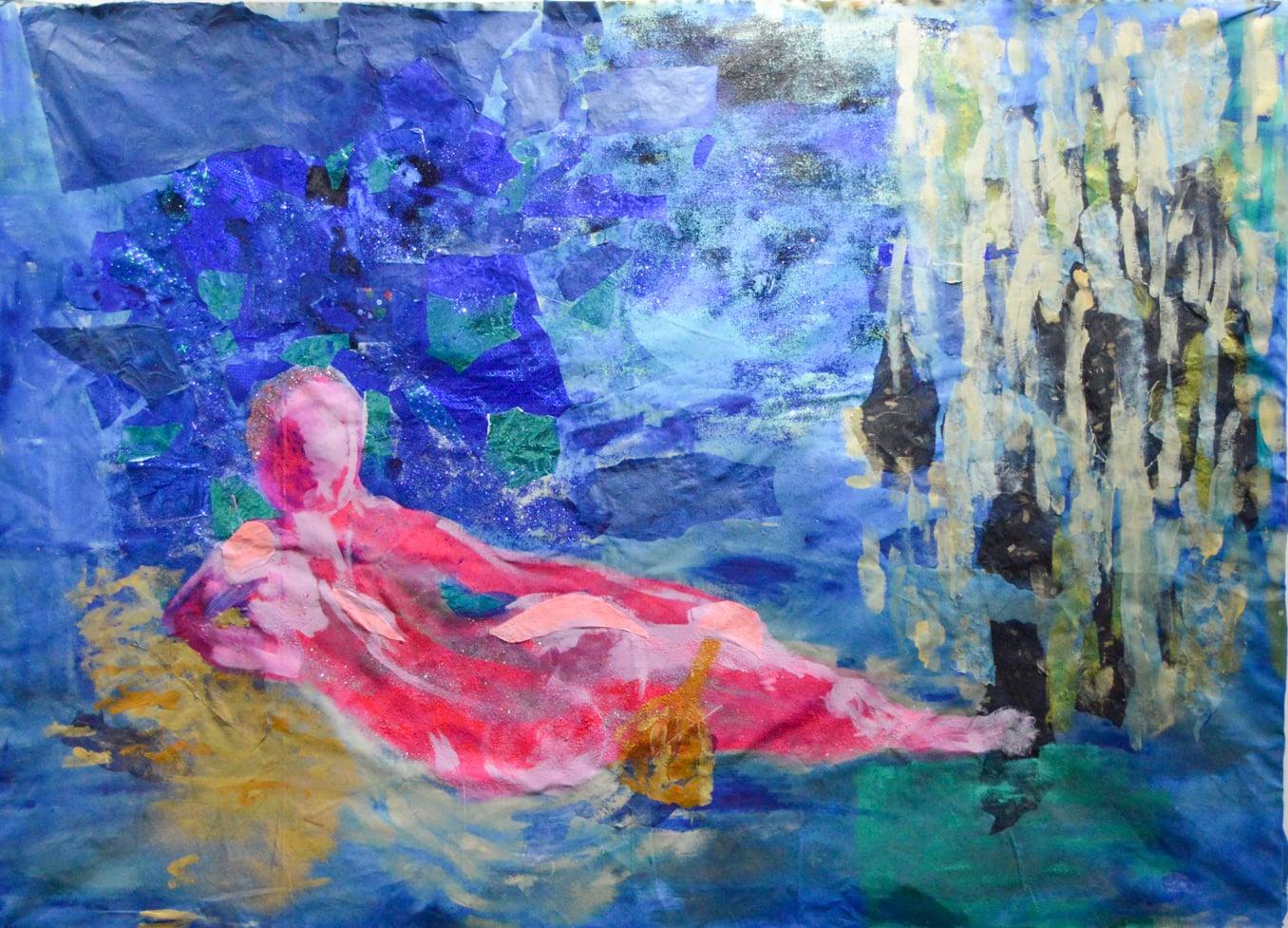 Have you ever imagined yourself being a famous artist with your works hanging all over The Metropolitan or Museum of Modern Art? Arpie Shekoyan, a UCSD transfer student majoring in visual arts, has just gotten a step closer to this dream, as she held her first solo exhibition, “Disoriented,” at Andrew D. Kamil Gallery. The UCSD Guardian talked to Shekoyan about being a visual arts student at UCSD and about deconstructing classic Orientalist pieces using paper, paint, glue and glitter.

Guardian: Why did you decide to pursue a degree in visual arts at UCSD?

Arpie: I’ve been very interested in art since ever. I am a transfer student, so when I was in general college I was just honing my art-production skills. I knew that UCSD has a very good visual arts program that is largely conceptually based. That was exactly what I was gravitating towards, because although it is great to craft your skills and be a figurative and representational drawer, I was leaning towards conceptual thinking. I wanted to study what is the idea behind every art work and how each of them affects the masses. Because of UCSD being a research institution, it has a strong theoretical foundation. Some amazing artists like Allan Kaprow and Barbara Kruger, who created a famous feminist work “Your Body is a Battleground” and also a clock piece in the dining area of Price Center, taught at UCSD. Here you can really learn from the best.

G: What was it like to organize your solo exhibition?

A: I was working on setting up the exhibit at the time when I was also involved in “Vagina Monologues,” which gave me quite a rush. Each student has a weeklong time slot for their exhibition, so it took me two all-nighters to get everything situated. Installing was not easy, because there is math involved when you want to hang up your pieces in a traditional way. You have to make a lot of measurements to make sure everything is equally leveled. Though sometimes I had to eyeball things here and there, I was satisfied with how it turned out.

Many people who came to the exhibit enjoyed the way it was installed, which made me very happy. As an artist, you pay more attention to your intuition rather than technicalities, so nailing down the technical aspect is always an achievement. De-installing when the exhibit was over was definitely heartbreaking.

G: What feedback did you receive from people who came to see your work?

A: I use a lot of craft-based materials, usually associated with childhood and femininity to deconstruct classic images created with high-culture materials, such as oil paint. So many people said they felt a connection to my work, because they used to scrapbook when they were children. This allowed me to talk about a more complex issue of representation of the Eastern world in Western art in a more familiar manner. In fact, we often do not give enough credit to other cultural legacies — Picasso often borrowed from African imagery, but African art is largely seen as primitive relative to the Western art.

However, I recognize that the student audience is more aware of the issue of representation. So I wonder how my works will be received in a more public sphere where people have different educational backgrounds. Showcasing my personal work to the broader audience will definitely be the next step.

G: Do you think your personal experience and background influenced your project?

A: I have always been interested in the female perspective that often lacks representation in the art world. I am also familiar with symbols used in Orientalist paintings, as they are present in my culture. Armenians have always had a close connection to Middle Eastern cultures, which made me interested in the cultural diversity of the region that is often ignored by the people in the West. My dad has been an inspiration as well, as he is highly devoted to art, even though it is not his main profession at the moment.

I did not think about it at first, but later realized that materials which I have used had special meaning for me ever since I was a child. I collected different papers, stickers and materials, and found special power in them.

G: The central piece of your exhibit is the deconstruction of the famous “Grande Odalisque” painting by Jean Auguste Dominique Ingres. A feminist group, Guerrilla Girls, also appropriated the same painting in their most well-known poster. Were you inspired by the group in any way or is it just a coincidence?

A: I definitely was. I learned about them in high school, and I thought their ideas were really cool. I did not see the connection between their work and mine right away, because initially I did not expect my project to have such a feminist perspective. But constantly being in the dialogue about how people are represented in art, I started asking myself why the woman on “Grande Odalisque” was represented this way, who is she being presented by, who is profiting of her exploitation. And Guerrilla Girls pose these questions in their art too.

G: What are your plans for your future work? Is “Disorientation” over?

A: I will definitely continue working on the series. There is still more research that can be done, because the issue of representation of the Orient is still present. I would love to keep the conversation going, as well as start working on a new project.

One thought on “Triton to Watch: Student Artist Arpie Shekoyan”