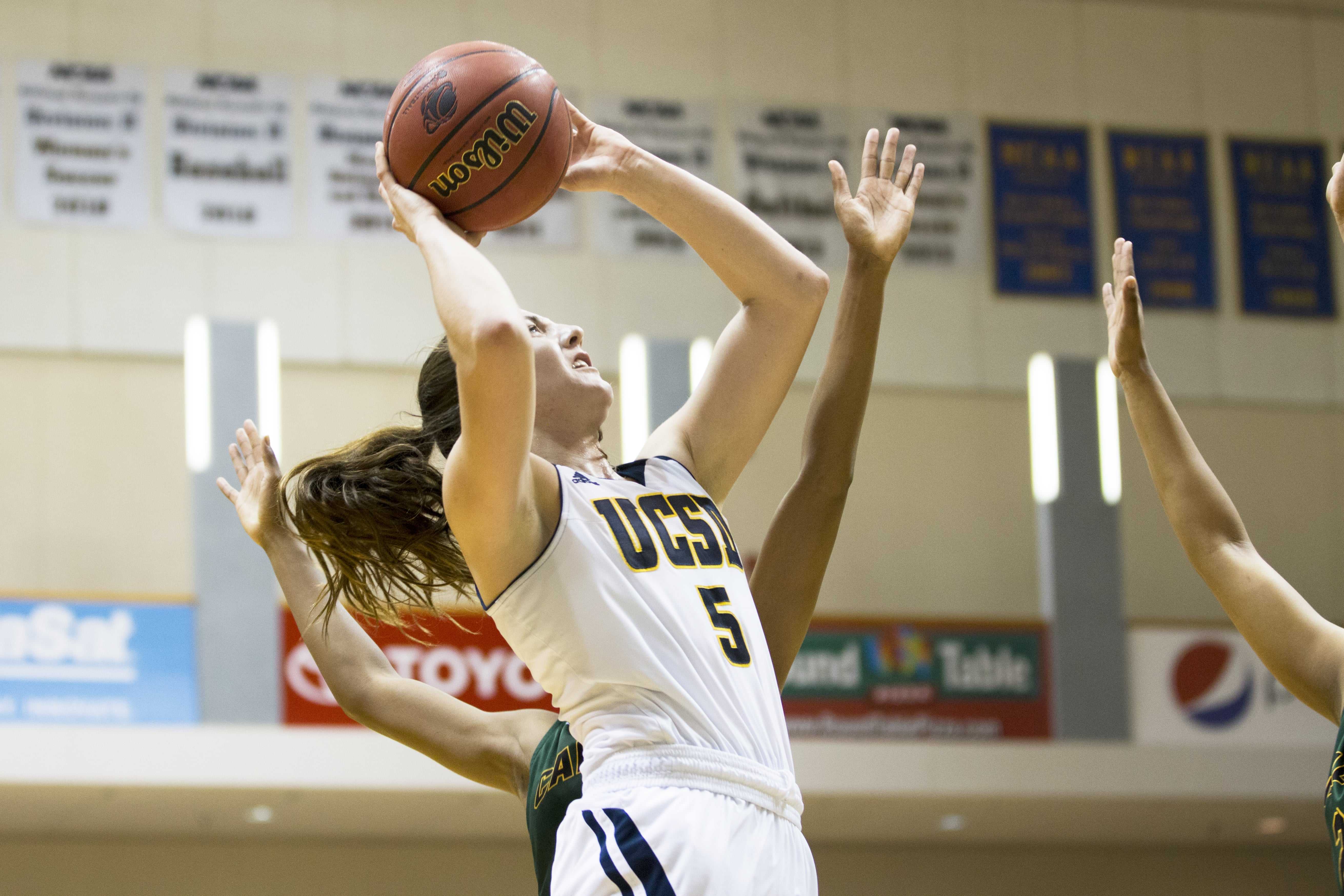 UCSD’s 10 game winning streak comes to an end against the Pioneers, who would go on to win the tournament.

Saturday’s Collegiate California Athletic Association semifinal pegged the two hottest teams in the conference against each other. No. 19 UCSD’s 10-game winning streak was on the line as it faced off against Cal State East Bay in Stockton, California, and the Tritons could not prevail in a back-and-forth game that went to overtime. UCSD is now 24–4 overall and hopeful for a spot in the National Collegiate Athletic Association West Regionals, after clocking in at No. 3 in the West Region for the last ranking.

The second-seeded Tritons held a five-point lead with two minutes left, but could not hold on to win in regulation as they got into a hole at the beginning of overtime. Down two, senior guard Jamie Katuna and senior forward Farrah Shokoor both had the chance to tie the game up, but the Pioneers had the last word and advanced to the finals with a 79–77 overtime win.

“We came out of the gates and understood the level of intensity that they had,” UCSD Head Coach Heidi VanDerveer told UCSD Athletics. “We were a little bit sloppy and not as sharp. In the second half, we got a lot sharper.”

The game was a back-and-forth affair, with 13 ties and 14 lead changes throughout the game. UCSD played extremely proficiently, shooting 51.7 percent as a team and pouring in all 12 of its free throws. However, much of the loss can be explained by the season-worst 23 turnovers committed by the team, out of which the Pioneers got 22 points.

Most of the Tritons’ scoring came from three players. Katuna followed up her 29-point outing against Cal Poly Pomona on Tuesday by scoring 30 on the Pioneer defense, on a 65-percent shooting average. Shokoor, named the CCAA player of the year on Thursday, shot 8–15 from the field for 26 points and also grabbed 10 rebounds for her 17th double-double of the season. Junior forward Cassie MacLeod had 11 points off the bench, as she, Katuna and Shokoor accounted for 67 out of the Tritons’ 77 points.

After one half of play, UCSD was trailing the Pioneers by only three points, 32–29. The Tritons went on to outscore Cal State East Bay 23–18 in the third quarter, with 13 of these points coming from the senior duo of Shokoor and Katuna.

However, UCSD went down by seven points in overtime, but managed to come back after two baskets from Katuna and junior guard Beth Mounier at only 39 seconds remaining in the game. Unfortunately, UCSD could not get another basket to sink and had to concede defeat.

“Overtime was a little bit like the game,” VanDerveer said. “They came out, jumped on us early and then we decided to come back to play. Jamie obviously is very offensive, and Farrah is as consistent a player that I’ve ever coached. The only thing that hurts me more than losing is to not give them an opportunity to cut down nets. They really deserved to have that opportunity.”

The NCAA West Regional will be held March 11 to 14, with the winner of the bracket winning a ticket to the NCAA Championship, held in Sioux Falls, South Dakota.

“I think we have great character on our team,” VanDerveer said. “I think once we process the missed opportunities here and once we understand that we have the chance to win six games and cut down another set of nets … we’ll let this one sink in and get past it.”