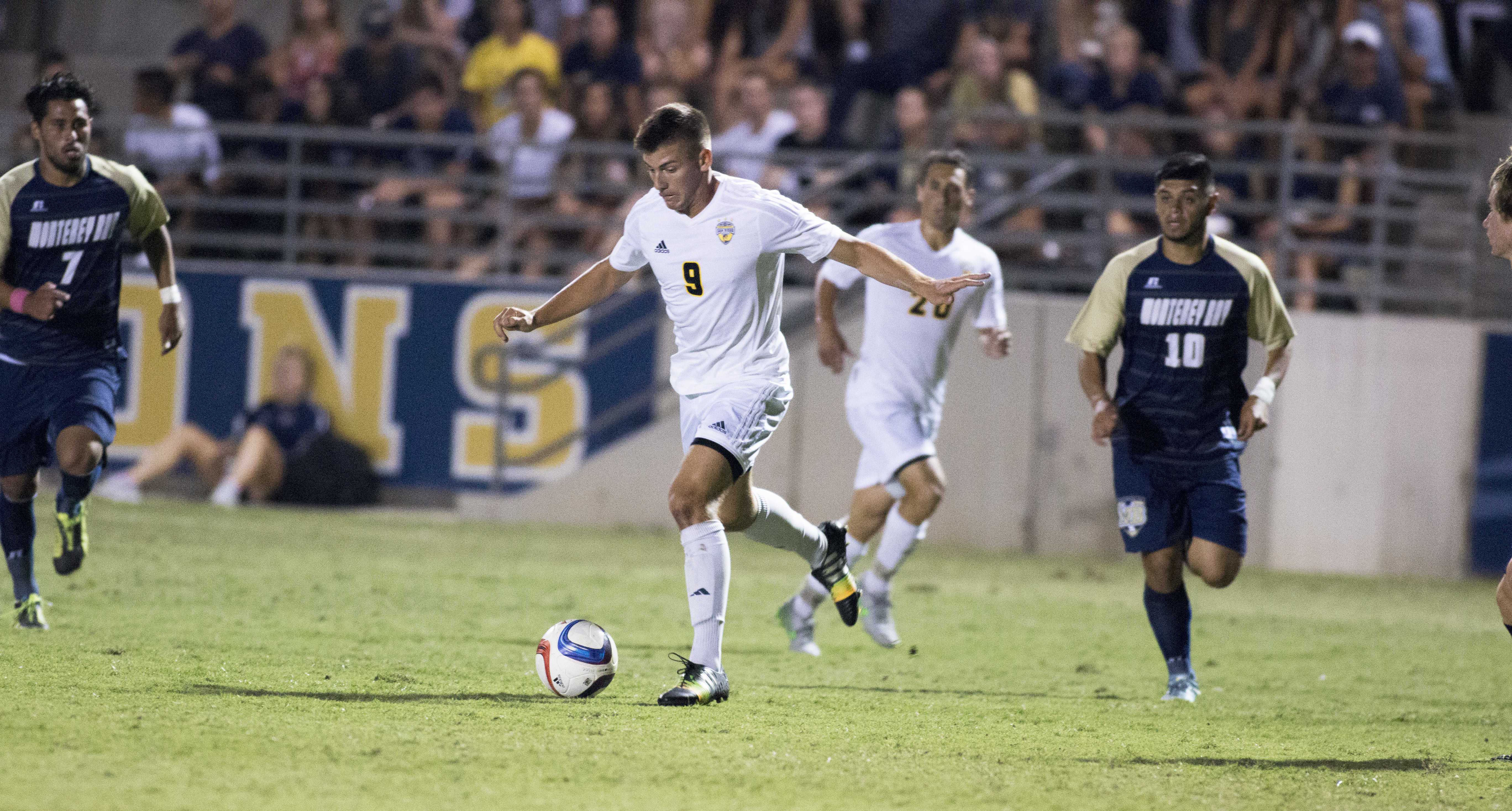 The UCSD men’s soccer team earned crucial points in hopes of a California Collegiate Athletic Association Championship berth this past week, beating Cal State San Marcos 1-0 on Wednesday and then drawing with Chico State 1-1 after two overtimes on Friday to wrap up its regular season. With the week’s results, the Tritons are now 6-5-6 overall and 5-3-4 in the CCAA. UCSD is now in a three-way tie for third in the standings with Stanislaus State and Cal State Los Angeles.

In a must-win game for the Tritons, sophomore midfielder Eric Young delivered the game-winner in the 76th minute that propelled UCSD to victory over Cal State San Marcos at Triton Soccer Stadium on Wednesday evening. It was a crucial win that kept the Tritons’ postseason hopes alive.

Young scored on a header off a left-sided cross delivered from fellow sophomore midfielder Zachary Lagotta at 75:34 that ended up in the lower right corner of the net. It was Young’s first goal of 2015 and the third of his career, as well as his second game-winning goal ever. Lagotta and junior midfielder Riley Harbour were each awarded with assists. Both now boast a team-high three over the season.

Young was also pivotal on defense — with 10 seconds left in the game, Cal State San Marcos’ junior midfielder Louie Farfan leapt from the rest of the players and put a strong header to the goal, but Young was in the perfect place at the right post to clear the ball and keep Cal State San Marcos scoreless.

Redshirt junior goalkeeper Cameron McElfresh was at his best, adding a pair of saves in what was his league-leading seventh shutout for UCSD, totalling 19 for his career. Cal State San Marcos’ senior goalkeeper Zach Sheppard had two saves on his end. Even with the win, UCSD was outshot in the game 15–8.

The match served as UCSD’s home finale but did not feature a traditional Senior Night ceremony prior to kickoff, as the Tritons have no seniors on their roster.

UCSD earned a 1–1 draw versus rival Chico State after double overtime in the Tritons’ CCAA finale at the University Soccer Stadium this Friday. The road point was valuable as the game once again held huge postseason implications.

Friday’s match was the last in the Tritons’ 2015 regular season schedule. The Tritons will now wait out the last eight days of the CCAA schedule to see if their 19 points are good enough to earn them a third straight postseason berth. The top six teams qualify for the 2015 CCAA Tournament.

UCSD opened the score at the 19:19 mark when freshman midfielder Brandon Monteiro Magpayo took a free kick and Harbour headed the rebound into the net to give the Tritons a quick 1-0 lead.

Chico State tied the game at 59:30 as junior forward Omar Nuno scored on a penalty from a handball called near the penalty area. The penalty shot was the first shot attempt for the home team.

Both teams continued to push to take the lead. UCSD came close when a throw-in was tossed near the far post and freshman midfielder Christian Cordell slid in to knock the ball in, but freshman goalkeeper Andrew Matthews was there to block the shot. Chico State almost got the game winner at 3:09 in the first overtime session when senior forward Octavio Murillo’s shot went just wide right. The game ended in a hard fought 1-1 draw after two overtime sessions.

“I thought the team played very well,” UCSD head coach Jon Pascale told the UCSD Athletics Department. “We overcame a brutal travel schedule and four games in [eight] days. Chico State was a very good opponent, but I thought we controlled the majority of the match. We were a little unfortunate to get the penalty called against us, and their goalkeeper made a great save late in the match [on Cordell]. I thought those two plays were the difference”.

The Tritons have finished their 2015 regular season and will now have to wait until the CCAA season ends to find out if they are one of the six teams to make it to the postseason.