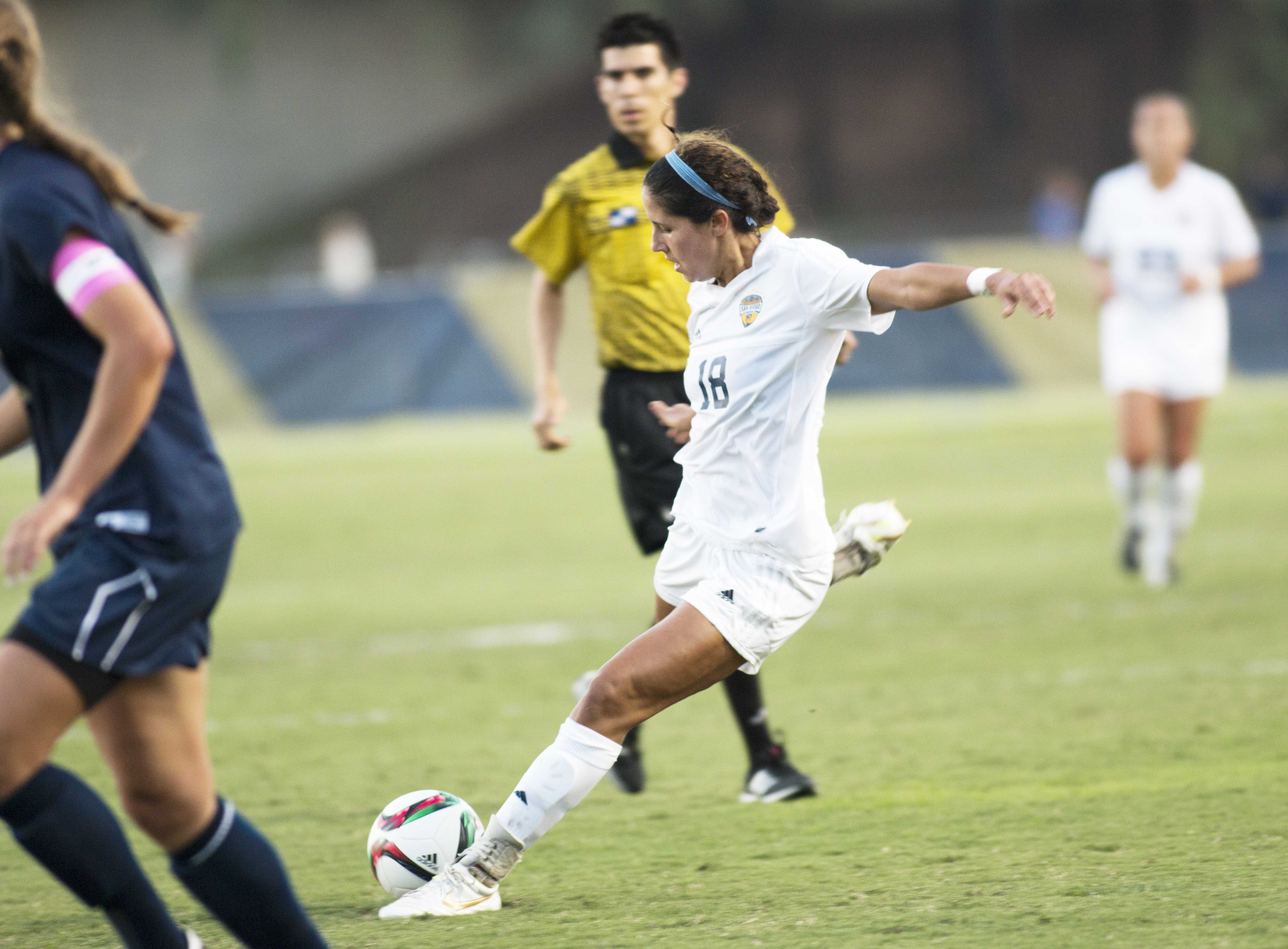 Women’s soccer crushes Cougars and Wildcats with one match remaining in the regular season.

After dropping its last match against Sonoma State, the UCSD women’s soccer team rebounded this past week as it went 2–0 against California Collegiate Athletic Association rivals, with a 2–0 win over Cal State San Marcos and 4-0 against Chico State. The second-place Tritons now have an 11–5–1 overall record and a 7–4–1 conference record, good enough to earn the team a spot in the CCAA tournament with one game remaining in its schedule.

In the freshman transfer’s third start, midfielder Elisa Martinez scored for the first time this season off of a 20-yard shot that landed in the upper left corner of the goal. Shortly afterward, the Tritons struck gold once again with a timely score by sophomore forward Katie O’Laughlin as she scored her sixth goal of the season from the left side. The early goals put the Tritons ahead 2–0 at the 33-minute mark, a lead the team would never relinquish.

The team shut out the Cougars with the help of UCSD senior goalkeeper Kelcie Brodsky’s four saves, in her 25th career individual shutout. Cal State San Marcos freshman goalkeeper Allie Jara did not fare as well as she allowed two goals and was pulled after the first half.

Cal State San Marcos’ offense was clearly stifled, as it was unable to score on any of its ten shots. Freshman defender Jenna Hernandez led the Cougars with a total of three shots, and a shot by senior forward Sarah Campbell bounced off the goalpost at the 72-minute mark.

UCSD scored twice on a total of twelve shots, seven of those shots on goal, along with a total of four assists. O’Laughlin led the team with three shots along with her one score.

Despite starting relatively slowly in comparison to its previous match, UCSD soon found its groove against Chico State. The game remained scoreless until sophomore midfielder Maxia Espino scored her second goal of the season by rebounding her missed header at the 38-minute mark. From that point onward, the Tritons never looked back.

“It took us the first 10-12 minutes to get our legs going, but once we did, we started getting hold of the ball, moving it and getting (Chico State) chasing,” UCSD Head Coach Brian McManus told the UCSD Athletics Department. “That allowed us to create a lot of chances, and we really dominated the rest of the first half.”

With the win, UCSD clinched a spot in the CCAA tournament with only one game remaining in its schedule. UCSD improved to 11-5-1 overall, while Chico State dropped to 9-4-2 overall.

“We’re in the CCAA Tournament, and now just have to wait for the seeding.” McManus said. ”I feel like we’re playing good soccer now, and don’t really care who we get matched up with.”

Up next, UCSD hosts a rematch with Cal State San Marcos on Oct. 30 to close out its regular season.