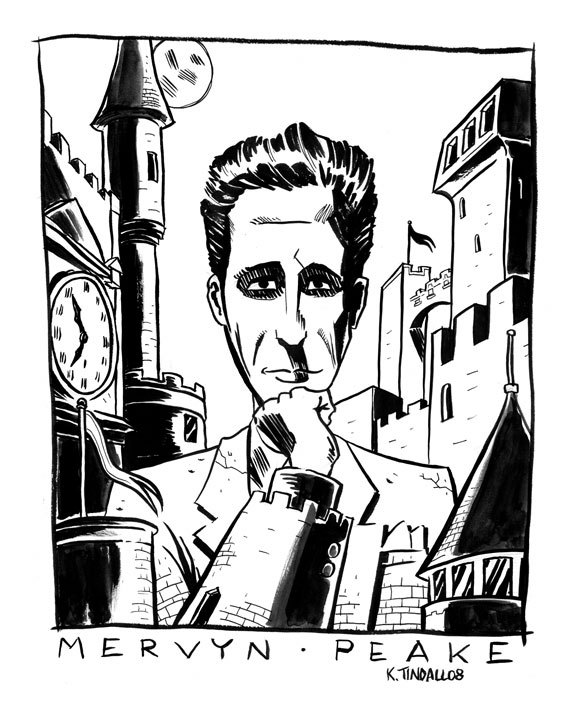 “Titus Groan” began my descent into madness. It’s onset was subtle – a few pages at night and post-its wedged by noteworthy sections – then, text still unfinished, I would re-listen my favorite passages on the audiobook. I found myself using words like “sartorial” in day-to-day conversation and craving prose at odd hours. I finally knew I needed help when I caught myself muttering passages under my breath between classes. So yeah, I like “Titus Groan.”

As I wrote this review, I realized my nigh-irrational love of the book rendered criticism impossible. So, instead of pretending to be impartial, here’s Three Reasons to Read Titus Groan.

Peake is a true prose-fessional. No part of his fictional world escapes his masterful depiction. Don’t just take my word for it, take his:

“Titus is the seventy-seventh. Heir to a crumbling summit: to a sea of nettles: to an empire of red rust: to rituals’ footprints ankle-deep in stone. Gormenghast.”

“They were all-but forgotten people: the breed that was remembered with a start, or with the unreality of a recrudescent dream.”

The book is peppered with apt links between unrelated concepts. It’s incredibly satisfying, like discovering the perfect conclusion to a limerick, or a really solid sandwich.

Meet the jolly crew of the castle. The inhabitants of Gormenghast are as fully fleshed – at least at the start of the book – as castle they occupy. Beneath the ironshod wheels of tradition lies the melancholic Earl and his osseous servant; the pendulous chef from whose grasp escapes a scheming kitchen boy; and the willful Lady with her querulous caretaker. The atmosphere is tangible.

“The crumbling castle, looming among the mists, exhaled the season, and every cold stone breathed it out. The tortured trees by the dark lake burned and dripped, and their leaves snatched by the wind were whirled in wild circles through the towers.”

Impress your friends and family! Prepare for the GREs! Peake is the master of esoteric language and with his help, you can be too. Vocabulary list comes with complementary descriptions of castles, trees, the weather, birds, wooden carvings, facial expressions, clothing, and rad sword fights.

I could go on: I love the amorality, the undercurrent of wry humor, and the interwoven horror. But there’s a reason why this is titled, Three Reasons to Read Titus Groan – and that’s because I’m only allowed five hundred words. To be honest, there’s a reasonable chance that you won’t like Titus Groan. It’s dense with strange adjectives, long-winded, and the plot begins a quarter way through. But if you put up with it, you’ll find Titus Groan a wordy pursuit.

“Drear ritual turned its wheel. … The passions, no greater than candle flames, flickered in Time’s yawn, for Gormenghast, huge and adumbrate, out-crumbles all.”