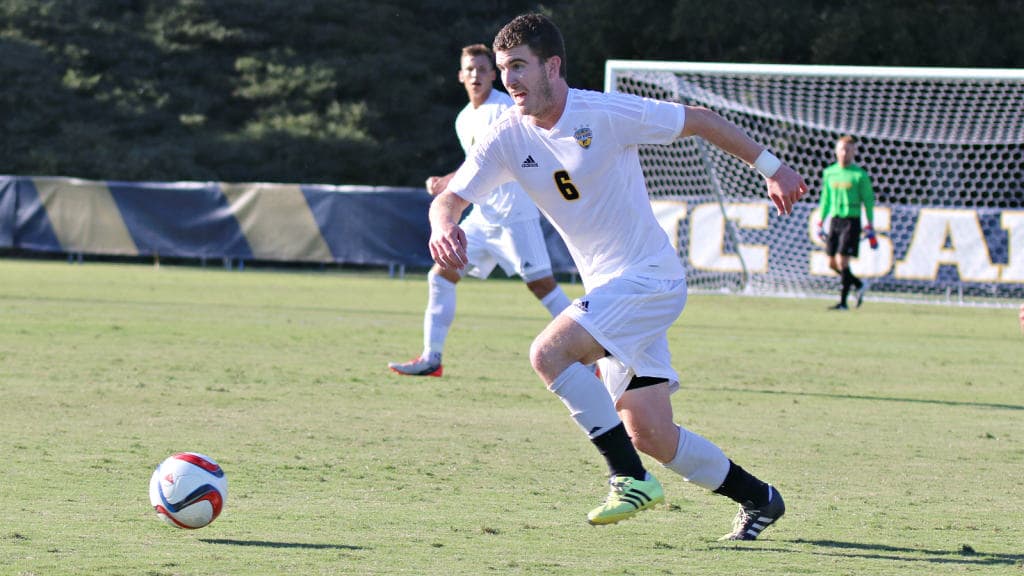 This past weekend, UCSD men’s soccer team took on California Collegiate Athletic Association foes Cal State East Bay and Cal State Stanislaus at Triton Soccer Stadium. The team snagged a 1–0 win in a highly defensive game against Cal State East Bay on Friday, but failed to repeat that success on Sunday’s game against Cal State Stanislaus, the top team in the CCAA, ultimately falling in a disappointing 2–1 decision. The Tritons now sit at 3–3–3 overall and 2–1–1 in the CCAA.

UCSD took an early lead against Cal State East Bay in the ninth minute of play in what turned out to be the only scoring sequence of the game. Sophomore forward Uly de la Cal began the play with a throw-in from the right sideline. Pioneer senior defender Duke Driggs attempted to clear the throw, but sophomore midfielder Zachary Lagotta regained possession with a quick touch and fired a left-footed shot into the net to push his team into the lead.

Despite a couple of chances for UCSD to increase its advantage, efforts to score fell just short of success. Freshman midfielder Brandon Monteiro Magpayo seized a chance to shoot on a wide-open net in the 49th minute but was shut down by a last-second block by the Pioneer defense. Within the next minute of play, UCSD attacked the net again. Junior midfielder Justice Duerksen hit a cross to Lagotta, who touched the ball across the penalty area to de la Cal. De la Cal then laid out and volleyed a spectacular right-footed shot that frustratingly ricocheted off the goalpost. Fortunately, the Tritons’ strong defensive efforts kept the Pioneers at bay, and UCSD secured a 1–0 victory.

“There were stretches where they were getting at us,” UCSD Head Coach Jon Pascale told the UCSD Athletics Department. “We did a pretty good job not giving them too many shots at the goal, though. We had some great moments on the attack [as well], and our set pieces looked dangerous.”

However, the Tritons’ luck ended on Sunday against Cal State Stanislaus. After giving up two goals in a span of two minutes in the last 12 minutes of play, UCSD ultimately fell in a 2–1 to the Warriors — its first home-turf loss since playing Cal Poly Pomona last September.

The Tritons notched the first goal up on the board after just 28 seconds of play when junior midfielder Riley Harbour scored off a touch from de la Cal. Their good fortune didn’t last, though — the remainder of the game was mired in missed chances to score. In the 61st minute, sophomore defender Kyle Panganiban sent a free kick toward the box. Harbour was there to receive, but his header shot back off the right post. The team missed yet another chance in the 72nd with an ill-placed shot that flew just to the left of the goal.

The Warriors staged a comeback starting in the 79th minute. Sophomore defender Luis Hernandez hit a backward shot off the inside of the post to level the score at 78:17, and senior midfielder Jose Ramirez sent his sixth goal of the season home less than two minutes later to give the Stanislaus the win.

“We just didn’t put away a couple [of] chances,” Head Coach Pascale said. “We left four quality chances on the table, we didn’t execute, and we gave the other team an opportunity to get back in it — and they did.”

The Tritons are on the road in two tough matchups this upcoming weekend — they will face off against No. 14 Cal State Dominguez Hills on Friday and Cal State Los Angeles on Sunday.