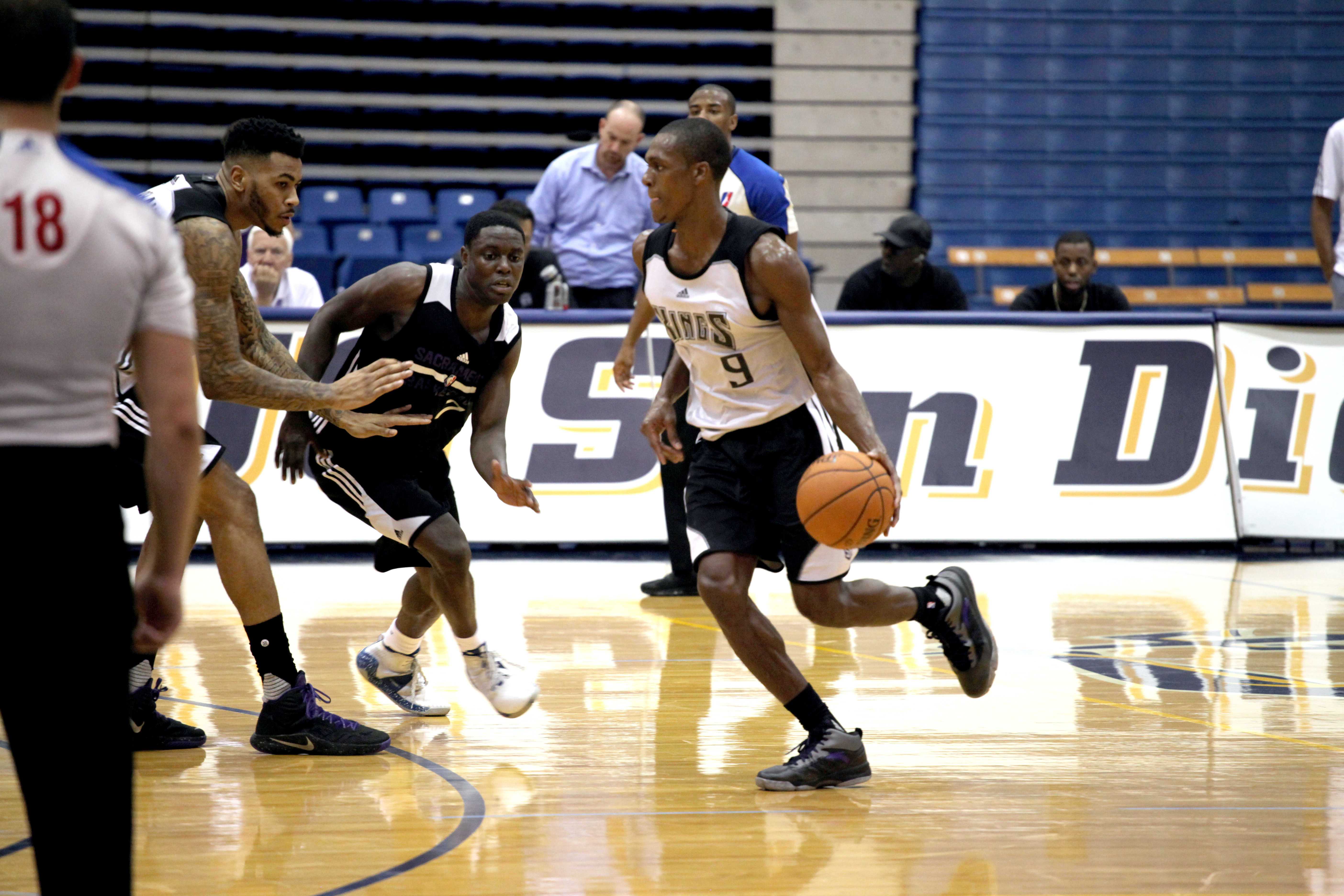 The Sacramento Kings are holding their NBA training camp at RIMAC Arena, the third team to do so in a span of 10 years, after the Phoenix Suns and the Los Angeles Clippers. The camp extends from Tuesday, Sept. 29 until Saturday, Oct. 3 and gives Head Coach George Karl the first chance to have his whole team at his disposition for their first full season together. On Tuesday, training camp opened its doors to media like ABC, FOX, Kings TV and the Sacramento Bee. The UCSD Guardian also had the opportunity to be there.

Contrary to previous NBA training camps held at RIMAC Arena, the Kings’ training camp was open and inviting to the media. The first 20 minutes of media accessibility were during the end of a scrimmage, giving the Guardian the opportunity to see guard Rajon Rondo training with the B side for Tuesday’s practice, with guard Darren Collison lining up with forward Rudy Gay and center DeMarcus Cousins on the A side. The Kings were playing on an 18-second shot-clock, down from the classic 24 seconds, which was probably a testament to their intention to playing fast. Cousins looked sharp, netting a couple of threes and a long-range jumper.

“I played a lot of four today, but I also played five,” Cousins said. “We got a lot of different looks of different lineups. The ball is moving well.”

When asked how nice it was to have shooters around him, Cousins answered: “I’m a shooter.”

Coach Karl looked enthusiastic about the prospect of coaching a team full of talent, but warned not to underestimate the toughness of the Western Conference.

“There are a lot of good teams in the west,” Karl said. “These are all great players with good skills, and they are all challenging themselves. Once we started playing five-on-five, some of the things we wanted to improve on, we improved on. I can’t deny it — I thought it was a pretty good practice.”

Some of the youngsters finished practice early and sat down to talk to the media. Forward Willie Cauley-Stein, the sixth overall pick in the 2015 draft, and guard Seth Curry, answered a few questions about the team and what they were expecting from training camp.

“We’re polar opposites,” Cauley-Stein said, when asked about his collaboration with Cousins. “That’s how you complement each other. He’s going to do things I don’t do, and I’ll do things he doesn’t do, so we’re going to mesh together perfectly.”

“It’s a nice gym, [RIMAC Arena],” Curry said. “There is a lot of space, so it’s fun being out here. We really just see the hotel room and the gym and that’s it.”

Cousins also highlighted the fact that this was probably one of the oldest teams he’d ever be on, considering he had led previous Kings teams that were among the youngest in the NBA. The addition of veterans like Rondo, forward Caron Butler and guard Marco Belinelli and the presence of veteran forwards Rudy Gay and Omri Casspi could help this team be something special. Coach Karl insisted on the abundance of quality players he had at his disposition, saying he could have a 10-men rotation and still have good players waiting on the bench.

“It sounds all good to say ‘I am the leader of this team,’” Cousins said. “But in order for this team to work, we need everybody in this team. It’s going to be about my voice, Rondo’s voice, Rudy’s voice, even some of the rookies’.”

The Kentucky connection is strong in the roster, with Rondo, Cousins and Cauley-Stein all coming from there. This will perhaps help this team build a good dynamic, better than those of the previous seasons that saw coaches get fired, most recently Mike Malone, and management turned over. In the end, all that matters this week for the Kings is practice, some rest and team-building.

“We’re doing a couple of things with the team here in San Diego,” Curry said. “We have a good amount of free time. There’s probably some time when we’re going to see San Diego.”

“Flying in, [San Diego] looked beautiful,” Cauley-Stein said. “It’s a different vibe — I like it. This campus is almost like paradise.”