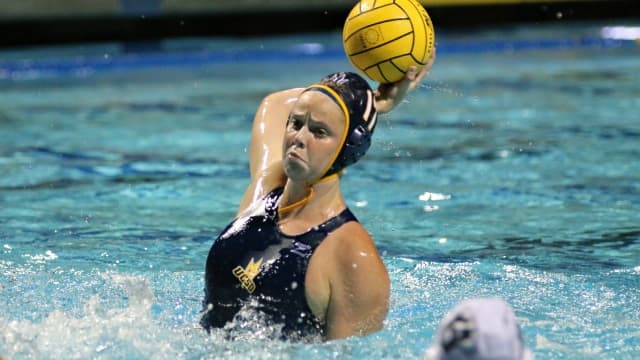 UCSD continues to suffer in a defeat to No. 17 UCSB and a narrow win against Cal State Bakersfield at UCSB Campus Pool.

The No. 19 ranked UCSD women’s water polo team had mixed fortunes on Sunday at the UC Santa Barbara Campus Pool as the Tritons came away with a win and a loss from their two games. UCSD played two incredibly close games, falling narrowly 5–4 to No. 17 UCSB in the morning session before bouncing back to take an 11–10 win over Cal State Bakersfield.

Now holding a losing 8–12 record well into the second half of the season, UCSD continues to struggle without its top scorer, junior two-meter defensive player Alexis Wieseler, who is still out with an injured hand.

The first game saw UCSD tie a season-best in goals against, with five, but the Tritons still could not come away. The higher-ranked UCSB Gauchos dominated early on as they crafted two back-to-back scores to quickly move ahead. The Tritons fought hard and managed to create a penalty opportunity, which junior attacker Laurel Kristel converted to make the score 2–1 at the end of the opening period.

In the second period, junior goalkeeper Courtney Miller managed to keep the Gauchos out of the cage. This led the way for senior attacker Jolene Guiliana to tie up the match with only 33 seconds left in the half.

The third quarter saw UCSB bounce back, producing two goals in the period to the Tritons’ one. Sophomore center Lauren Boyer scored UCSD’s sole goal in the period, as the Tritons trailed 4–3 going into the final period.

Guiliana continued her efforts as she levelled the scores once again at the beginning of the fourth with her second goal of the game. However, with 1:39 left in the game, the Gauchos managed to find the back of the net once more, resulting in a bitter 5–4 defeat for the Tritons.

The one bright spot of the disappointing loss came from Miller’s 11 stops in the cage along with the strong Triton defense that combined to record the season-low goal-against tally.

In the second game of the day, the Tritons looked to settle old scores as well as bounce back from the day’s earlier defeat. UCSD had fallen 11–6 earlier on Jan. 24 to Cal State Bakersfield and was looking to avenge the loss.

It was clear the Tritons were hungry for redemption as they took an early 3–1 lead with just 2:16 gone on the clock. However, the Roadrunners proved they weren’t going to simply lie down by scoring three back-to-back goals before UCSD junior attacker Emma Sasson tied things up at 4–4 at the end of an explosive beginning period.

UCSD then took a 6–5 lead into halftime thanks to scores from the Guiliana and fellow junior attacker Julia Kirkland.

Once again, Cal State Bakersfield proved to be tough competition as its aggressive offense responded with three goals in the third period to take the lead back. Still, the Tritons managed to score two, tying the score at eight with one period to go.

The climactic final period saw each team grab two goals to level the game at 10. Guiliana scored once again for her fourth goal of the day, and sophomore attacker Lani Tittle also managed to find the net for the Tritons.

With four minutes left in the game, Kirkland stepped up for UCSD to score her fourth of the game to clinch an 11–10 victory.

“The defensive battle against UC Santa Barbara this morning really tired us out,” UCSD head coach Brad Kreutzkamp told the UCSD Athletics Department. “With a two-hour turnaround, I was proud of the way we came out and were able to score 11 goals against [Cal State] Bakersfield, a team that beat us by five earlier in the year.”

UCSD will now hope to build a winning streak at the Claremont Convergence on Friday, March 6 and Saturday, March 7. The blue and gold will take on Claremont-Mudd-Scripps at 2 p.m. and Pomona-Pitzer College at 7:20 p.m. on Friday, as well as Chapman University at 11:40 a.m. and University of La Verne at 3:40 p.m. on Saturday.