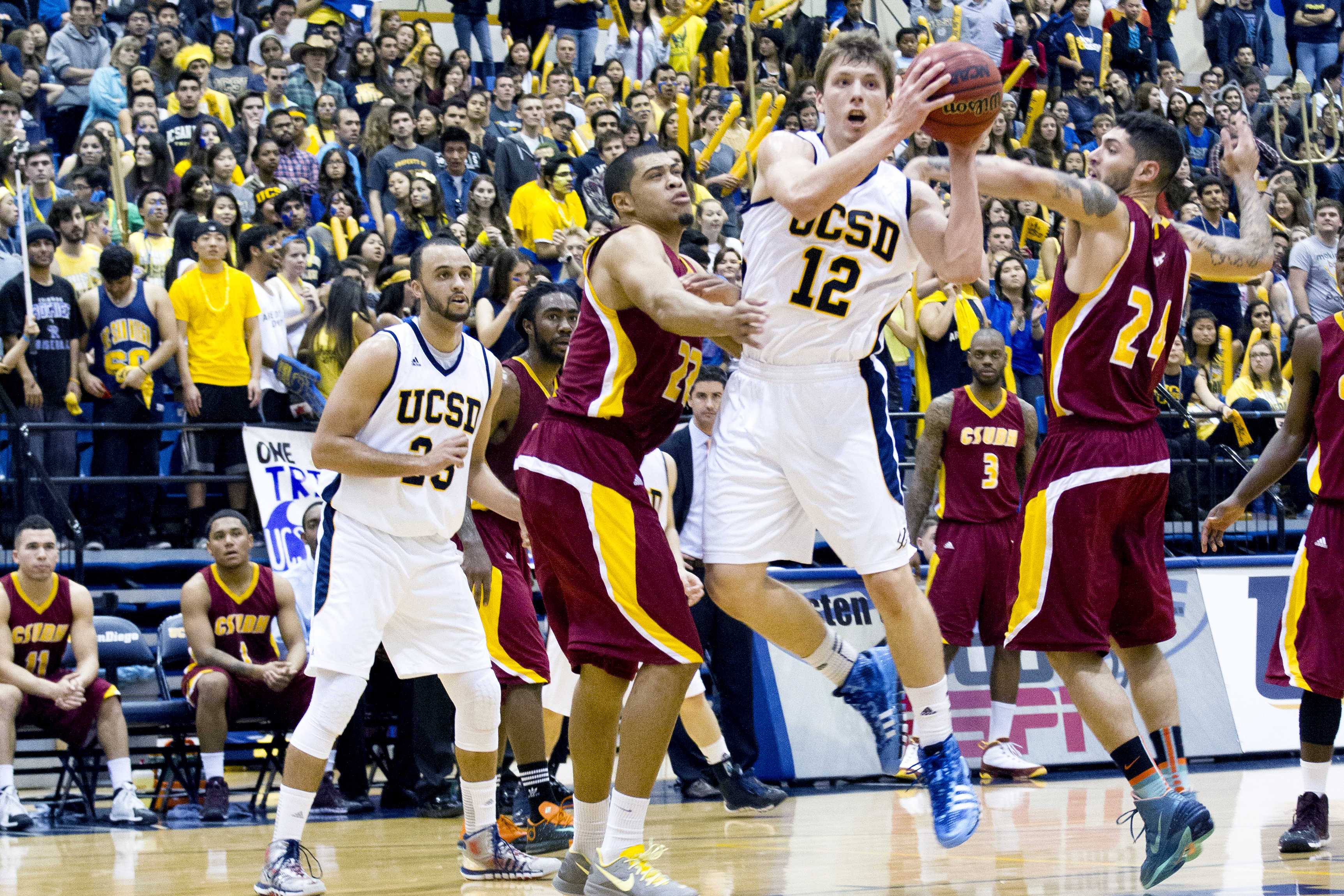 UCSD loses to Humboldt State in overtime but come back and defeat CSU San Bernardino on Saturday, grabbing the fifth seed in the CCAA tournament.

The UCSD men’s basketball team wrapped up its regular season this past week with a pair of away games, falling short in an 81–80 overtime loss to Humboldt State (15–7) on Thursday night but gaining back some momentum for the postseason with a 71–62 victory over Cal State San Bernardino (12–10) in their season finale.

The Tritons finished with a 16–10 record overall and 14–8 mark in California Collegiate Athletic Association play and will enter the postseason tournament with high hopes as the fifth seed.

Despite a career best effort from junior guard Hunter Walker and a strong comeback effort in the second half, the Tritons could not pull off a victory against Humboldt State on Thursday night. The game had playoff implications for both sides as the two teams were tied for the third seed in the CCAA going into the contest.

UCSD was down by as many as 12 points halfway through the second but climbed its way back up to amazingly take a two-point lead with only 32 seconds remaining in the game. Humboldt State answered right back with a jumper from Calvin Young II to tie the game at 71, forcing the game into overtime.

Walker continued his strong showing in overtime when he scored the first basket. Sophomore guard Aleks Lipovic made a three-pointer with 33 seconds remaining and pushed the lead to 78–74. Humboldt State answered right back with a three of their own and a pair of missed free throws by UCSD allowed Humboldt State to take the lead. Freshman guard Grant Jackson made a layup to put the Tritons back on top by one with only seven seconds on the clock, but Humboldt State made two crucial free throws that tilted the game back in their favor.

Walker finished with a career-high 25 points on 11–16 shooting from the field. Sophomore forward Adam Klie continued his consistent play, scoring 17 points and grabbing eight rebounds. Junior forward Zach McMillan had his best game of the year, finishing with 11 points and nine rebounds.

Both teams shot exceptionally well, especially in the second half, draining over 60 percent of their shots. However, the Tritons were limited in three-point shooting, making four out of the only eight attempts.

“I’m really proud of the way we played tonight,” UCSD head coach Eric Olen told the UCSD Athletics Department. “It’s disappointing not to pull it out, but to be in position to win on the road shows the toughness of this team. Our group never wavers in its belief in each other and that is going to serve us well the rest of the way.”

Despite the loss, the Tritons were able to regroup and finish their season on a high note Saturday night by defeating Cal State San Bernardino to complete the season sweep.

The lead reached as high as 17 in the first half in which UCSD held the Coyotes to only 24 percent from the field. At intermission, the Tritons led 36–23. Cal State San Bernardino fought back in the second half and came within six points of the lead with 26 seconds remaining, but their atrocious shooting (30 percent from the field) and the Tritons’ defensive efforts were too much to overcome. The Tritons outscored the Coyotes 26–14 in the paint and 35–5 in bench points en route to their victory.

“It’s great to finish the regular season with a win,” Olen said. “We were able to withstand quite a bit of foul trouble, and we had solid production from our bench.”

With the regular season now in the rearview mirror, the Tritons look forward as they prepare for their first CCAA playoff matchup next week against fourth place Cal State Stanislaus (14–8). The Tritons were swept by the Warriors in their two regular season matchups, losing by five points at home and suffering a heart-breaking 66–67 loss in a double-overtime thriller as the visiting team. However, if this surprise of a season is indicative of anything, UCSD is fully prepared to upend predictions and make a run for the crown.

“We are playing well at the right time and are excited about the opportunity to compete in the CCAA Tournament,” Olen said.