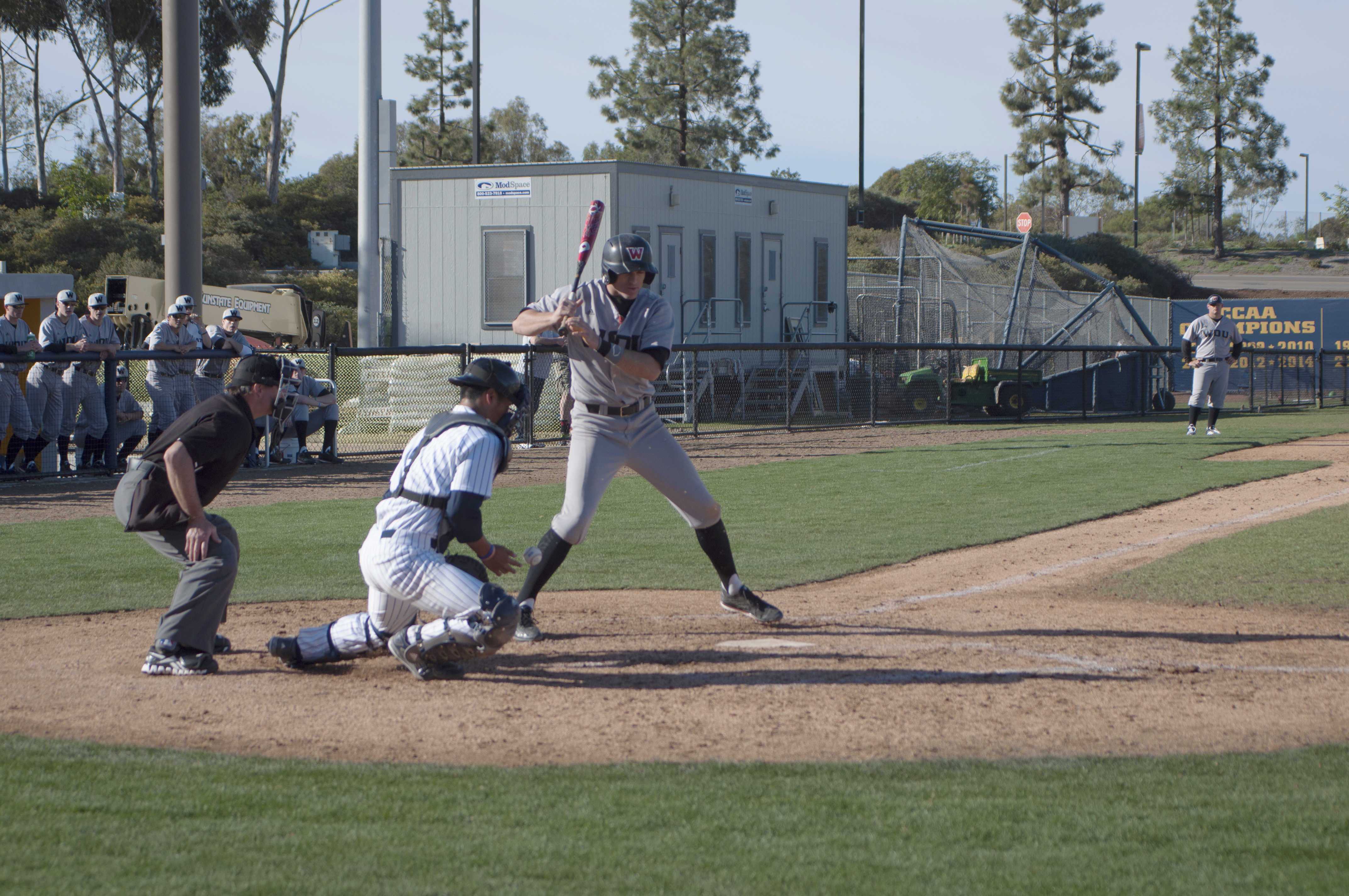 Tritons shutout Toros for three consecutive games and win three out of four to clinch series.

The No. 17 Triton baseball team clinched its first road series of the 2015 campaign against Cal State Dominguez Hills over the weekend, winning three games of a four-game series that was played half in Carson and half at the Triton Ballpark. UCSD amazingly shut out the Toros in the first three games 12–0, 2–0 and 19–0, respectively, but fell 3–1 in the seven-inning nightcap of Saturday’s doubleheader. Following the loss, the Tritons fell 6–2 in a one-game matchup loss to No. 22 Azusa Pacific University on Tuesday.

The three-game shutout streak against Dominguez Hills appears to be the longest such streak in the history of UCSD baseball. After the last five games, the Tritons stand at 10–6 overall and 6–2 in California Collegiate Athletic Association contests.

Junior right-hander Justin Donatella (2–1) threw the first road game of 2015 in Carson, producing six shutout frames and lowering his ERA to an impeccable 0.56 on the year. A total of eight Tritons crossed the plate to mass the 12 runs with sophomore outfielder Jack Larsen racking up the most at three runs. Larsen also contributed three hits on four at-bats and three RBIs in the blowout effort.

Senior pitchers Trevor Scott (3–1) and Dan Kolodin (2–1) shared innings on the mound in Friday’s 2–0 win. Kolodin tallied his first save of the year, retiring six batters across his two innings, while Scott took the first seven frames and allowed seven hits on 24 at-bats.

On Saturday, UCSD returned to Triton Ballpark to finish the series. The 19-run blowout in the third game of the series marked the Tritons’ highest scoring total of the year thus far. Thirteen of those runs came in the first four frames alone and a total of 12  Tritons crossed the plate. Junior right-hander Troy Cruz had nearly a perfect night on the plate with four hits on as many at-bats, racking up three RBIs and two runs.

Game four saw the Tritons fall in the seven-inning nightcap, earning their first loss on the road this season. Cruz (1–2) and senior southpaw Chad Rieser (0–0) doubled-up on the mound for the loss.

Cruz allowed the Toros’ three runs off of eight hits across his 4.2 innings on the dirt. Rieser sat down all seven batters he faced in the remaining action and tallied his 16th strikeout for the year, but UCSD’s offense could not overcome the deficit.

“We got beat in the second game [on Saturday],” UCSD head coach Eric Newman told the UCSD Athletics Department. “We didn’t play real well last Sunday and we didn’t pitch too well on Tuesday but we sat down and had a talk about it — we’re not the team we want to be just yet, but we’re learning from these opportunities.”

Tuesday. Kolodin threw for five with two runs on four hits. Senior infielder Erik Lewis continued his 39-game streak of reaching base with a walk in the first inning. The Cougars’ junior right-hander, and Major League Baseball prospect, made life difficult for Triton runners and only allowed one earned run on the night despite some difficulty on the mound early on.

As of Monday, Feb. 23, UCSD fell from No. 10 to No. 17 in the Collegiate Baseball Newspaper’s NCAA Division-II ranking poll. The slippage comes after a loss to cross-town rival Point Loma Nazarene University at Triton Ballpark before the Dominguez Hills series —a game the Tritons were expected to win. UCSD is now in fourth place in CCAA standings, only behind teams that started league play a week behind the Tritons and are still undefeated.

UCSD will remain on the road for more CCAA action against Cal State East Bay this weekend. The four-game series is set to open on Friday at 2 p.m. in Hayward.