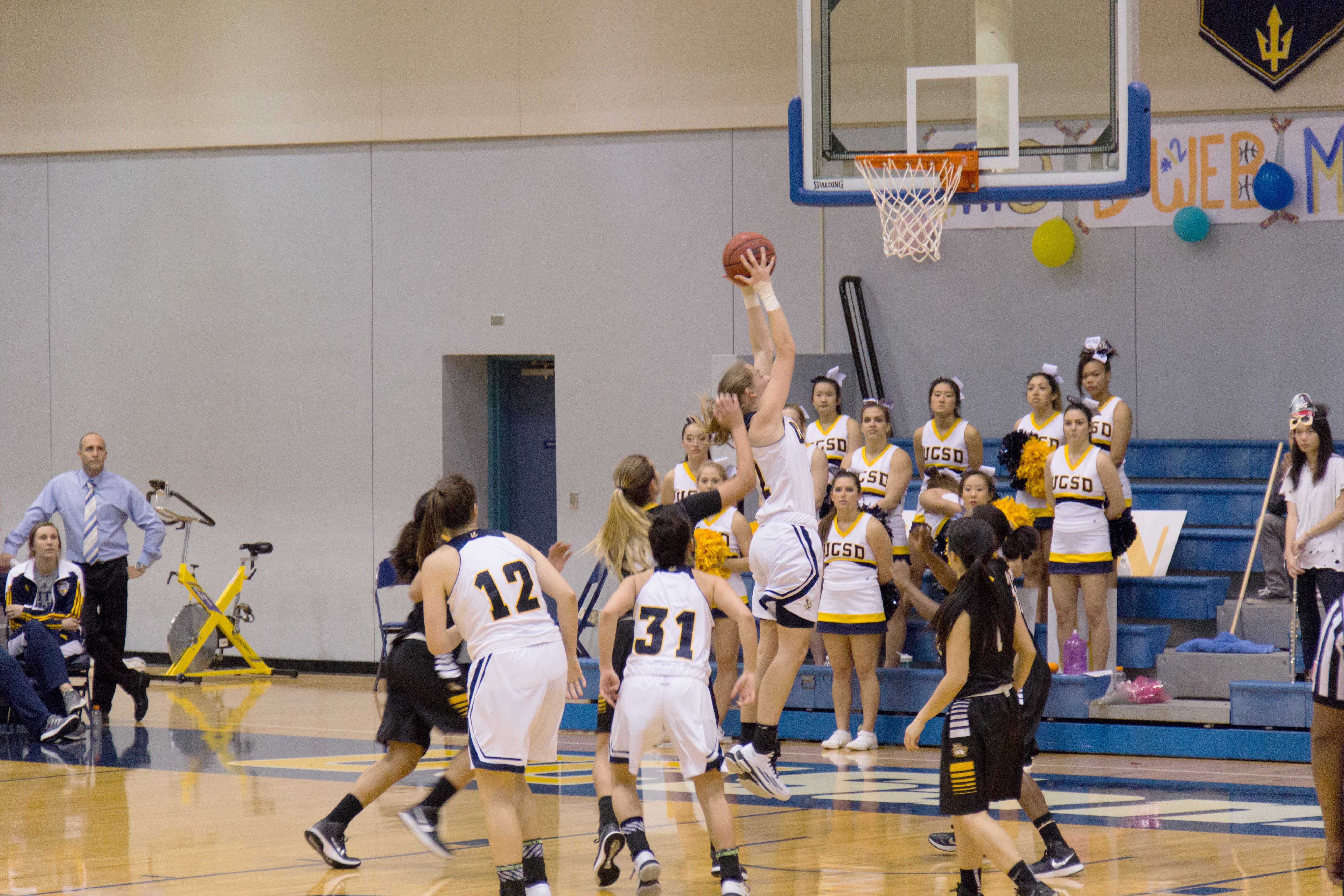 In the final homestand of the season, the UCSD women’s basketball team defeated both Cal State Dominguez Hills (17–3) and Cal State Los Angeles (8–12) to secure a guaranteed spot in this year’s postseason. The Tritons’ big Friday night win over Dominguez Hills officially clinched the playoff berth, while Saturday night’s 69–57 victory extended their win streak to five.

UCSD now stands at 16–9 overall and 14–6 in the California Collegiate Athletic Association and is tied for the fourth spot in the conference.

The Tritons swept the season series over the number two ranked team in the conference with Friday’s 68–60 win.

The two squads were off to a slow start but UCSD picked things up to get an early 14–9 lead after 10 minutes of play. The Tritons had their frontline combine for 33 points and also shot 5–10 from downtown in the first half. The lead stayed around five for a while, but a late surge pushed UCSD to a 33–25 advantage at halftime.

After the break, UCSD continued to push and the lead went up to 12. Junior forward Farrah Shokoor had one of the best plays of the night when she stole the ball and scored a lay-up with the foul in transition with 12 minutes remaining in the game.

Despite a minor Toros attempt at a comeback, the lead would not dip under eight as the Tritons controlled the end of the game to cruise to a victory.

“We may not have the fastest, tallest, strongest players, but as a team, we compete very well,” redshirt freshman guard Taylor Tanita said.

Shokoor dominated the game on the defensive end, compiling 18 boards, two blocks and one steal, along with 11 points for another double-double on the season. Sophomore guard Hayley Anderson had 11 points as well, while senior forward McKennan Bertsch and senior center Dana Webster also scored in double figures.

The real star of the night was Tanita, who helped break Cal State Dominguez Hill’s defense with her nine assists. UCSD overall held Dominguez Hills to just 33 percent shooting from the floor, and the team’s chemistry was on display in its 16–4 assist advantage.

“Taylor has worked very hard to earn more playing [time],” UCSD head coach Heidi VanDerveer said. “I have coached a lot of people and she probably has one of the highest basketball IQs of anybody I have ever coached.”

On Saturday, the Tritons went right back to work and defeated Cal State Los Angeles 69–57 on Senior Night.

UCSD traded baskets with Los Angeles in the opening minutes of the game and went up 8–7 after five minutes of play. The Tritons then went on a 8–2 run and would not look back for the remainder of the game. The lead went up to 12 at halftime, when the Tritons gained a 37–25 advantage over the Golden Eagles.

After halftime, UCSD went on a 9–2 run and took a 19-point lead over Los Angeles at 50–31. The Golden Eagles could never bring the deficit down to single digits for the rest of the game.

UCSD’s front line dominated the game, with Bertsch, Shokoor and Webster combining for 32 points and 28 rebounds. Bertsch grabbed her first double-double of the season (14 points and 10 boards), and UCSD outrebounded Los Angeles by an astonishing 61 to 34. However, UCSD also committed 24 turnovers and will need to clean things up if it wishes to go far in the CCAA tournament.

“We had a great senior appreciation night,” VanDerveer said. “We had six seniors and they wanted to go out and play hard, but in the first half we were trying too hard and then maybe we ran out of a little energy. We didn’t have great energy in the second half but I am happy we got the win.”

Before looking toward the postseason, UCSD still has two CCAA games coming up next weekend. The Tritons will be on the road to face Humboldt State (18–2) on Thursday, Feb. 26 and Cal State San Bernardino (14–6) on Saturday, Feb. 28, with both games tipping off at 5:30 p.m. Both opponents are qualified for the CCAA tournament and will provide UCSD with two quality games to prepare for the upcoming tournament.