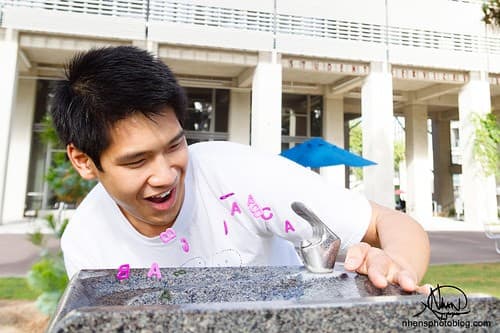 A few weeks ago, a hooded man concealed in a black mask snuck onto our campus.

Armed with a sledgehammer, he took to the fountain next to the Student Services Center and what was once a prized piece of the Stuart Collection became nothing more than shattered granite. The reason for the vandalism remains unknown, but the loss of Michael Asher’s untitled fountain can be felt publicly by the display of a construction sign and two orange sandbags now standing as its temporary tombstone.

The Stuart Collection, the university’s official collection of sculptures and monumental art initiated by James Stuart DeSilva in 1981, has both made UCSD its home as well as added unforgettable visual impressions that allow students and staff to distinguish their “home” from other college campuses. As a force of 18 different modern art pieces that thrive on their ability to both blend in with and accent their location, the collection has stayed true to DeSilva’s original vision of peripheral art.

“I wanted art to be accessible for casual visitation, without any … obligation to the passerby to look at or think about it, let alone treat it with reverence,” DeSilva wrote in his founder’s statement in “Landmarks,” a book about the collection. “My personal experience told me that living with art, casual repetitive exposure to it, can lead to understanding and appreciation, if not passion and possessiveness, even among those who profess to dislike art.”

But whether “understanding and appreciation” has been achieved in the minds of students and staff across the board is questionable. For Thurgood Marshall College fifth year Kevin Huynh, who is studying art history and human biology, the magic of the artwork, in part, comes from the names of the artists behind them, most of whom are celebrities in the art community.

Mary Beebe, who has been the director of the Stuart Collection since its establishment, says that bringing exceptional artwork from emerging, highly praised artists to UCSD is her utmost goal. One recent example is Do Ho Suh, who created the house sitting crookedly on top of the Jacobs School of Engineering in Earl Warren College known as “Fallen Star.” Beebe first encountered Suh’s work in New York in the late ‘90s, and he has since exploded onto the contemporary art scene.

Beebe stands behind the Stuart Foundation Advisory Committee, a credible group of art professionals who are experts in judging art to be of noteworthy concept and quality. The committee includes directors from several Californian art museums, the dean of Yale School of Art, a former art curator of MIT and one faculty member from the UCSD visual arts department. The group provides its opinion on the artistic merit of proposed artists; however, the final decision to move forward with a project is made by the UCSD chancellor.

“It’s a very distinguished board,” Beebe said. “So when somebody says to the chancellor, ‘How can you call that blue fence [in the eucalyptus grove] art?’ The chancellor can say, ‘Hey, I’m a chemist. What do I know about art? But I have this art board of people who have spent their lives thinking about these things, and they tell me that it’s not only art but it’s good art.’”

For some students, like Huynh, each piece of the Stuart Collection presents a uniquely creative approach to decorating the UCSD campus, but other students find difficulty in connecting with the abstraction of their cryptic artistic messages. Dr. Jorge Mariscal, a Spanish and Chicano literature professor, has found this to be true of many students he encounters from underprivileged backgrounds.

“I think the students who come from — for lack of a better term — urban areas or even inner-city areas, always tell us, ‘I don’t really get [the Stuart art pieces]. They’re kind of funny, but they don’t really have any connection [to me],’” Mariscal recounted. “They’ll say, ‘Where I grew up in South Central L.A., everyday I walked down the street and there were murals, community and student art — all kinds of things.’”

The situation improved, Mariscal says, when the Chicano Legacy 40 Anos Mural was created and put up over the wall of Peterson Hall in 2011, one year before Do Ho Suh’s “Fallen Star”. Originally, it was meant to be temporary, but after the racially controversial “Compton Cookout” event in 2010, students demanded the mural be allowed to remain.

“Finally, those students were very happy, and they said, ‘Now I feel like home when I walk by that area,’” Mariscal said. “And we’ve even had students, since then, say that one of the factors they chose UCSD [for] when they were accepted and looking at campuses is that they came here and saw that mural and they saw their family in that mural, whereas the [Tim Hawkinson] teddy bear can’t do that.”

Mariscal would prefer to see the Stuart pieces supplemented by work from a more diverse group of artists, including more women and ethnic minorities. Beebe says that she is continuously trying to reach out to black artists whom she admires, but so far their proposed projects haven’t worked out for various practical reasons, including financial ones.

Beebe emphasized that the Stuart Collection does its best to contact artists who are well-recognized in the art community — regardless of their background — and that art pieces are not picked for any reasons other than merit and how well they will work on campus.

“People will respond differently [to the collection], and that’s part of the whole thing … to figure out if you have a relationship with one of these pieces or not. And I know that because they’re abstract, it takes a while longer,” Beebe said. “One [student] told me, ‘When I first came to campus, I thought that blue fence just might be art.’ That’s the kind of thing that makes my heart go pitter-patter, to open your eyes and think that something different — that you’ve never seen before — just might be art, that there might be some intention behind it.”

This intention, however, seems to be lost on many students. Mariscal, who teaches in Marshall’s Dimensions of Culture program and lectures on the Stuart Collection when discussing the privatization of public universities, feels that the abstract nature of the collection makes it difficult for some students to see the pieces as art.

“If you look at the Stuart Collection, they don’t seem to be predisposed to [collecting] ‘representational art,’” Mariscal said. “Like the blue screen through the [eucalyptus] trees, most people … think it’s like something to protect the birds or something, right? It’s very abstract, which, to a lot of working-class people, doesn’t speak to them.”

To Marshall junior Diane Yoong, the Stuart Collection serves as a reminder of the privatization of the university. She views the collection’s relationship with UCSD as a type of business transaction and wants students to have more opportunities to influence what art goes on campus.

“I wish there [were] more input from the students and more works by students on campus,” Yoong said. “I want to see work that is relevant to the history of this campus and the land that we are on to remind students about the efforts made by those before us and hopefully inspire more work for the future.”

As for including students on the collection’s advisory board, Mariscal believes that the Stuart Collection has always been resistant. He feels that, though the Stuart Collection always consults the visual arts department when commissioning art pieces, its process should be more democratic and include staff and students, who spend a considerable amount of time on campus.

“[The committee] is a very narrow range of people, not only in terms of diversity, ethnic diversity but also gender and all kinds of things and clearly class,” Mariscal said. “Some people will hear what I’m saying and say, ‘Well, let’s just fix the Stuart committee; let’s make that more democratic,’ [but] I don’t think that’s going to happen.”

While Beebe said that the Stuart Foundation Advisory Board is unlikely to add undergraduates, a visual arts graduate student will be joining it. Additionally, she said that the international advisory committee is diverse, with several members who are women or of different ethnic minorities. Most board members were picked by DeSilva in the early days of the Stuart Collection, and, aside from adding new members to replace those who have passed away, they are not looking to expand the committee. Additionally, any new board members must be approved by the chancellor before their appointments.

Progress toward student involvement on the board may come soon, but commissioning students for artwork faces additional challenges entirely. One is a lack of funding; another is Stuart’s strict fixation on sculptures alone. Beebe says that UCSD, while abundant in artists from various media specializations, has yet to produce a sculptor who could be considered for the Stuart Collection. Consequently, none of the Stuart artists are UCSD alumni.

Beebe has, however, encouraged student artwork on campus apart from the Stuart Collection. She says the collection only holds jurisdiction over large monuments, but paintings and murals are beyond its scope. Even modest works of art, such as the shining mirrors that one student discretely placed around the eucalyptus grove, are advocated by Beebe. The major concern with bigger pieces, she says, is being able to meet university restrictions.

“They have to go through the campus,” Beebe said. “It has to meet codes because if it doesn’t pass the grounds, then people will just take it down right off the bat. [Bigger monuments] really need to be secure.”

The mirrors in the trees, which can be found by peeking into the forest next to Peterson Hill, are one of Beebe’s favorite student projects because it requires the viewer to pay attention, an idea that resonates with the larger works of the Stuart Collection.

“The whole idea of these works is to open your eyes and allow you to think about something that you hadn’t necessarily seen or thought about before,” Beebe said. “So it’s a little bit about permission to do that, and it’s a little bit about challenging yourself. It’s not as much about whether you like things or not, [it’s about] what [students] think. It’s very easy to say ‘I don’t like that one.’ Okay, why don’t you like it? Or ‘that one’s my favorite.’ Great, why is it your favorite? I think that’s what a university is about, really, is sort of learning to think in those kind of ways.”

One thought on “Art Around Us”