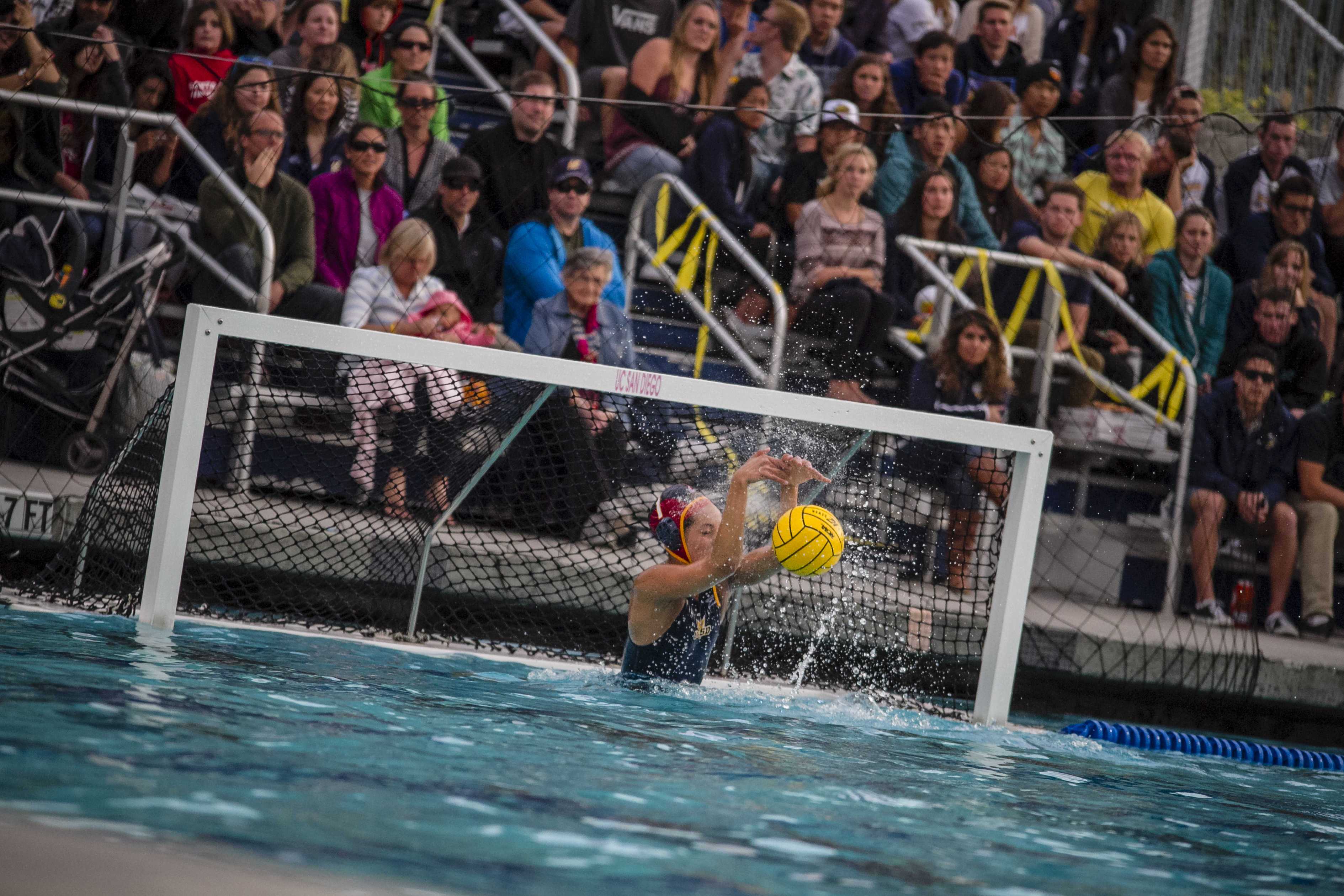 Kicking off its 2015 campaign, the No. 13 nationally ranked UCSD women’s water polo team had a busy opening weekend at UC Santa Barbara’s Winter Invite. The Tritons lost a pair of matches to No. 5 Arizona State University and Cal State Bakersfield on Saturday before bouncing back the following day with two victories against No. 17 University of Michigan and No. 11 Cal State Long Beach.

In their first action since the NCAAs last May, the Tritons struggled early on in a 9–5 loss against Arizona State. The Sun Devils jumped to an early 4–0 lead in the first frame, an advantage that would prove too great to overcome for UCSD.

Junior two-meter defensive player Alexis Wieseler netted a pair of scores in the second quarter, but Arizona State matched her effort with two goals of its own to maintain a 6–2 edge. In the third quarter, the Tritons were outscored 3–1, with their lone goal coming from sophomore attacker Connie Wu. The final period saw a 2–0 shutout for the blue and gold but made little difference in the losing tilt.

Later that day, the Tritons fell to Cal State Bakersfield in a lackluster 11–6 outcome in which they missed 23 shots.

Again, UCSD fell into a hole early on, allowing five goals in the first quarter despite tallying two of their own from Wieseler and junior attacker Laurel Kistler. The Roadrunners would only add to their advantage as Cal State Bakersfield easily handed UCSD its second loss of the season in as many games.

Wieseler, Kistler and senior attacker Jolene Guiliana each scored two, serving as the only goal-scorers in the match.

“We were a team that hadn’t really defined itself yet [on Saturday], not knowing that we are now a defensive team,” UCSD head coach Brad Kreutzkamp said. “Last year, we could catch up to teams at any time. We went back after that game and decided that we have to buy into playing defense early; otherwise we’re not going to win games.”

Despite the tough opening day, the Tritons seized their redemptive opportunity on Sunday.

UCSD first defeated No. 17 Michigan 9–5, with four goals coming from Wieseler. The Tritons recorded three goals in the first half, while junior goalkeeper Courtney Miller allowed only one in the cage.

Despite the slight 3–1 lead entering the second half, the Wolverines narrowed the deficit down to a 5–4 score at the end of the third quarter. However, UCSD dispelled any trace of a comeback attempt in the final frame, netting four goals while conceding just one to Michigan.

Outside of Wieseler’s four, Kistler finished strong with a hat trick of her own. Miller also recorded 11 saves.

In their final game, the Tritons recorded an impressive 8–6 comeback win against their higher-ranked opponent No. 11 Cal State Long Beach. Cal State Long Beach came out strong to take a 4–2 edge after the opening period. However, Miller would allow only two more goals for the remaining three quarters as the Tritons fought their way out of the early deficit.

UCSD scored one goal in the second frame but shut out the 49ers to enter the half trailing 4–3. In the third, the Tritons outscored Cal State Long Beach 2–1 to knot the score at five apiece.

In the final frame, UCSD built off momentum to score three goals and allow just one to take the hard-earned 8–6 win and complete the four-game weekend split.

Wieseler and junior attacker Julia Kirkland each recorded a hat trick, while Miller stepped up in the cage with an early season-high 16 saves.

“Obviously I felt really happy about getting two top-20 wins the next day,” Kreutzkamp told the UCSD Guardian. “They really listened.”

After losing key players at the end of last season, including UCSD’s all-time scoring leader Sarah Lizotte, the Tritons will have to rely on a younger ensemble cast this season along with a new approach to the game in hopes of returning to nationals.

“We knew that losing a couple [of] offensive powerhouses last year with Lizotte and [Melissa] Bartow that we were going to have to define new roles for the girls coming back this year,” Kreutzkamp said. “We start with our defense. If we can hold our teams to six or seven goals, we can give ourselves a chance to win.”

The Tritons will return to action on Thursday, Feb. 5, against Hartwick College in their first home game of the year starting at 7 p.m. UCSD will then host the Triton Invitational that weekend.