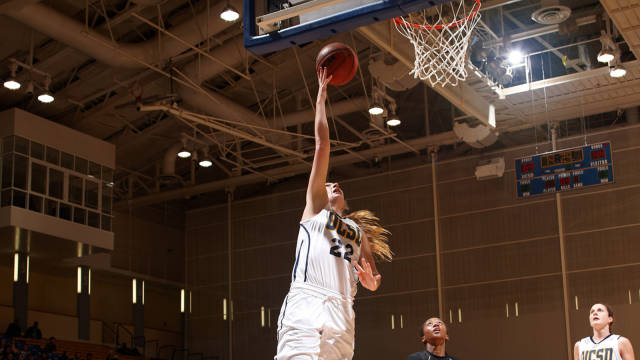 The UCSD women’s basketball team officially opened up its 2014–15 season with a thrilling victory on Saturday afternoon. The Tritons traveled to the 2014 Tip-Off Classic hosted by Cal State San Bernardino and defeated University of Mary 89–84 in overtime.

“It was a very good opportunity for us to play lots of different combinations,” head coach Heidi VanDerveer told the UCSD Guardian. “We are playing a lot of young kids since we have six seniors but also six newcomers. It was kind of like a reality check, and we passed it and can learn a lot from this experience.”

“Taylor is an excellent point guard with tremendous instincts,” VanDerveer said. “She is so poised while being aggressive and she’s only going to get better and better. I am very excited about Taylor.”

It was a tight game all along, with the biggest lead coming in the first half when the Tritons led 36–23 with six minutes left in the period. However, University of Mary quickly rallied back to take a 45–44 halftime lead. The rest of the game remained close, with 18 total lead changes and 14 ties recorded throughout regulation play.

Playing through a tightly contested, back-and-forth second half, the Tritons found themselves down 75–73 with half a minute left in play. On the Tritons’ final possession, sophomore guard Beth Mounier pulled up from beyond the arc for a game-winning shot but fell short. However, Shokoor came up with the clutch offensive board and dished it out to Bertsch who tied things up with 21 seconds left in regulation to ultimately send the game into extra play.

In overtime, it was guards Seto and Tanita whose clutch play made the difference, as the duo combined for 10 of the Tritons’ 14 points. The 14–9 advantage in overtime scoring was enough to hold off University of Mary. Forward Brittney Dietz scored a whopping 35 points for the Marauders and fellow forward Sloan Turner added a double-double with 11 points and 12 rebounds.

UCSD, now with a fresh 1–0 record to start its campaign, will travel next weekend to the West Region Crossover Classic hosted by Western Washington University. The first game is scheduled for Friday, Nov. 21 against Seattle Pacific University at 5 p.m., before the Tritons move on to play Western Washington the following day at 7:30 p.m.

“We have to really grow from the [next] couple of weeks,” Vanderveer said. “We are going up to play against an excellent Western Washington team. For a young team, [we have] to have people play together and trust each other so we can get in a rhythm both offensively and defensively.”