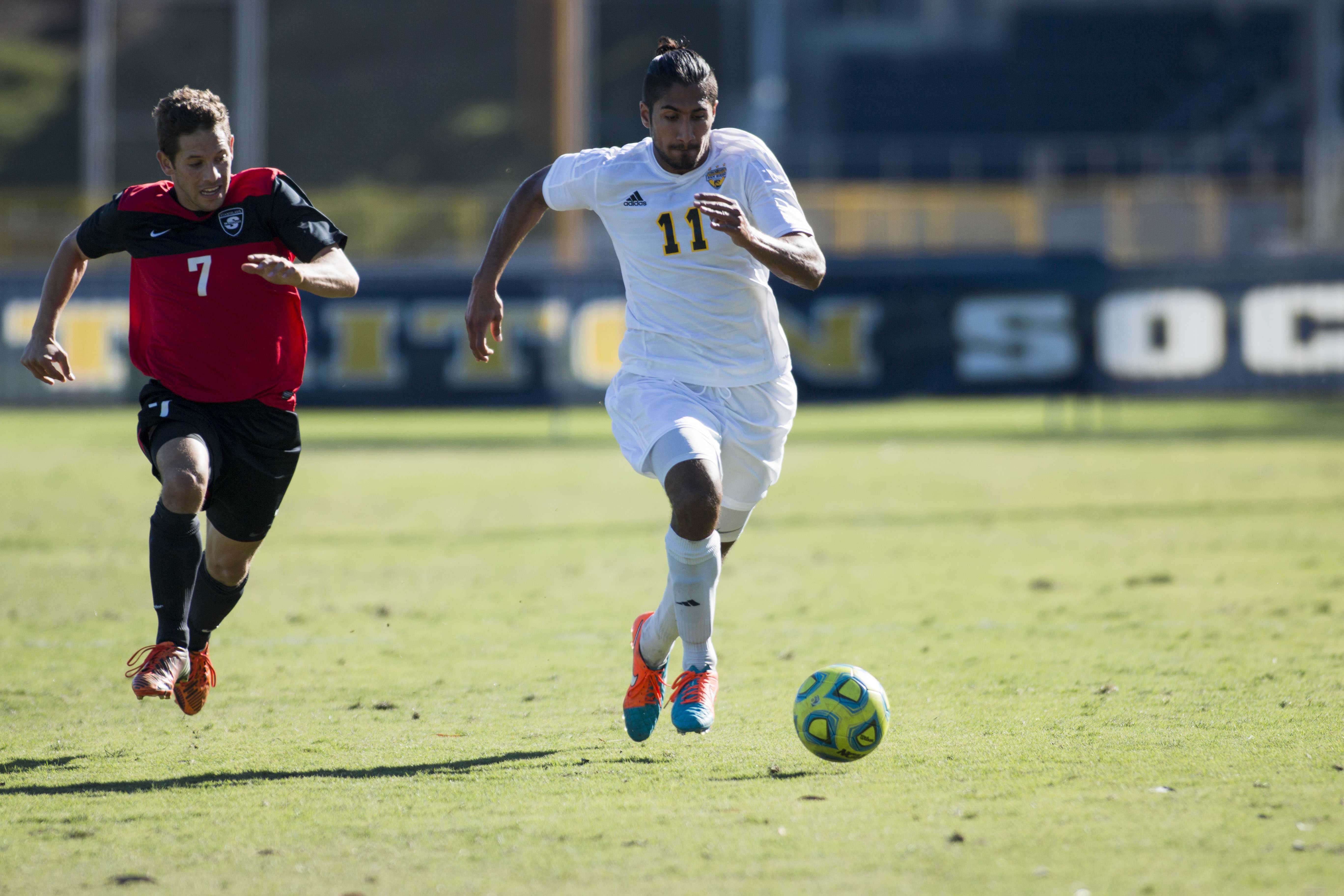 Tritons end regular season on a high note but are ousted in first round of the CCAA championships.

Death by shootout. Despite securing home field advantage in a 2–0 victory over Cal State Dominguez Hills on Thursday, the UCSD men’s soccer team all but concluded its season at Triton Soccer Stadium in a narrow shootout loss to Cal State Stanislaus in the first round of the CCAA Championships on Sunday afternoon.

The Tritons close out their year with a 10–5–4 overall record. UCSD still has the possibility of earning an NCAA Championship berth, but chances are extremely slim.

The Tritons ended a four game winless streak (0–1–3) on Thursday’s senior night. Six senior Tritons (Brandon Bauman, A.J. Beloff, Alessandro Canale, Matthew McClure, Nick Roberts and Jacob Valadez) were honored prior to the start of the game. The match was attended by a big crowd as Triton fans cheered for UCSD.

Early on, the visiting Toros appeared slightly on top as they managed to create legitimate offensive chances. Cal State Dominguez Hills freshman midfielder Joey Chica caused trouble for the Tritons down the left hand side of the field and had the best chance of the first half when his skilfull half volley forced a superb reaction stop from junior Triton goalkeeper Cameron McElfresh at his near post.

Although neither squad threatened much in the first half, the Tritons came out blazing in the second. With just over six minutes gone, UCSD jumped ahead when sophomore striker Malek Bashti struck his third goal of the season, capitalizing on freshman winger Eric Young’s low cross.

Three minutes later on the 55th minute mark, UCSD doubled its lead thanks to senior captain midfielder Brandon Bauman. Bauman converted a well-struck free kick from just outside of the 15 yard box for his team-leading fifth goal of the season.

The Toros battled back but with a superb effort from the home squad, the Tritons ultimately maintained a clean sheet. Freshman midfielder Charlie Keating cleared a headed opportunity off the line in the 79th minute, and McElfresh produced two brave saves in the last ten minutes to earn his eighth shutout on the year.

“This was a special one for us, especially us seniors.” Bauman told the UCSD Guardian. “Knowing that we were in [qualification for the CCAAs] kind of took the pressure off. But the fact that a win would [give us] third in the conference and we would get to host gave us that extra boost. I’m happy with the win.”

On Sunday, the third-seeded Tritons were held in a deadlocked match against sixth-seeded Cal State Stanislaus.

UCSD’s best chance of the first half came through good link up play when Bashti produced a low cross which was nearly met by senior midfielder Jacob Valadez with 10 minutes gone.

Both sides had great set piece opportunities as they shared 13 corners between them in regular time, though neither side could capitalize.

In the 87th minute, it took a quick reaction stop from goalkeeper McElfresh to keep UCSD in the game, when the Warrior’s sophomore midfielder Jose Acosta made a skilfull solo run through the Triton defence.

In overtime, both teams made sure not to concede with the golden goal rule in place. Each squad registered only one shot a piece.

With neither side finding the back of the net through 120 minutes of play, both squads entered into a shootout.

Bauman took the first kick for the Tritons but failed to net his shot. Following Bauman’s missed chance, both UCSD and CSUS traded successful kicks until the Warriors’ fifth kick missed, saving the Tritons from elimination. However, in the next set of shots, Beloff missed for UCSD, while the Warriors’ freshman midfielder Rafael Chavez secured his shot to finally end the match.

“Our guys are fighters, and I think they’re winners,” men’s soccer head coach Jon Pascale told the UCSD Athletics Department. “They left it all on the table, and I thought we played well. Stanislaus is a tough team to break down and get goal scoring opportunities against.”

Despite a strong season full of impressive performances, the Tritons have little hope of continuing their athletic year. The NCAA announcement for qualifying schools will take place on Monday, Nov. 10.

“There’s a lot of good teams out there,” Pascale said. “We’ll see what they decide. If they call our number, we’ll be ready to go.”

UCSD completes amazing run to finish season and clinch playoff berth but fall in first round of CCAAs.

Despite an amazing conclusion to the regular season on Thursday night, the UCSD women’s soccer team ultimately concluded the week on a bittersweet note after a season-ending, postseason loss on Sunday. The Tritons clinched a playoff berth in their final regular season match with a 3–0 victory over Cal State Dominguez Hills but fell 2–0 against third-seeded Cal Poly Pomona in the first round of the CCAA Championships.

The Tritons, who entered the CCAAs as the sixth seed, conclude their season with a 9–6–3 overall record.

Despite the early playoff exit, the Tritons nevertheless crafted an improbable run for CCAA qualification in the latter stretch of the season, going undefeated (5–0–1) in their final six regular season matches to clinch a near impossible postseason berth.

Thursday evening capped off the Tritons’ impressive streak, as they seized control of their season at home on senior night. Five Tritons (Cassie Callahan, Kylie Hill, Kiley Leshin, Izzy Pozurama and Michelle Yasutake) in their final athletic year were honored prior to the game as part of the senior night tradition. Callahan and Pozurama especially, had been determinant for the undefeated streak the Tritons rode into the game.

“The five seniors stepped up big and played well for us,” women’s soccer head coach Brian McManus told the UCSD Guardian. “[It] was a must win situation.”

Sophomore forward Kiera Bocchino netted two goals in the game. Her first goal came from an assist by Callahan and opened up the scoring at the 24th minute. The Tritons would close out the first half with the 1–0 lead.

The match was decided quickly in the second frame, as Bocchino scored her second goal only 36 seconds into the half and freshman midfielder Jordyn McNutt put in a third goal less than five minutes later.

It was the fifth straight game with a clean sheet for junior goalkeeper Kelcie Brodsky (three saves), who shared the shutout with junior goalkeeper Itzel Gonzalez. The Tritons went on to outshoot Cal State Dominguez Hills by a dominant 19 shots to ten.

“We knew coming in to it that it was going to be a huge game,” Callahan said. “Overall it was just such a great night. We are peaking at the right moment. We are really confident going into the CCAAs.”

Unfortunately, the Tritons failed to maintain their momentum on Sunday, as the sixth-seeded Tritons could not keep up with third seed Cal Poly Pomona, who remains undefeated on home turf.

Entering the match, UCSD had shut out their past five opponents. However, the Broncos quickly ended the streak, when junior midfielder Arika Ontiveros netted her shot in only the sixth minute of play to give Pomona a 1–0 edge.

“Unfortunately we came today, and for some reason, [during] the first half we didn’t play to the level we’ve been playing for the last eight games,” McManus told the UCSD Athletics Department. “It came back to haunt us.”

Less than ten minutes later, UCSD was awarded a penalty shot after the Broncos committed a foul in the box. Callahan stepped up for the kick and the opportunity to tie the match up, but amazingly, her shot was saved by a diving freshman goalkeeper Ricki Ives. The Tritons failed to capitalize on any other chances, while the Broncos added to their lead with another goal in the 57th minute.

UCSD outshot the Broncos 14–12 in the match but ultimately saw its season come to an end with the 2–0 conclusion. Cal Poly Pomona advances to face second-seeded Chico State next Friday.

As for the Tritons, their incredible season, highlighted by their clutch run toward the end, concludes on a tough note. UCSD will have large holes to fill next season with the departure of senior offensive leaders Cassie Callahan and Izzy Pozurama.

“It’s a bad ending to the season because we’re a better team than what was on the field the first half today,” McManus said. “The second half was us. But the season’s over, and we start again next year.”