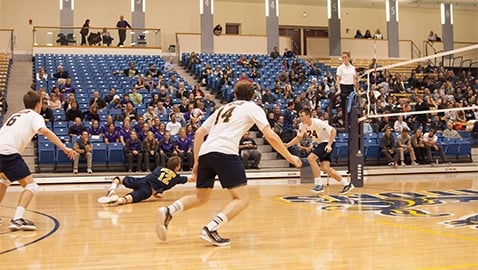 The UCSD men’s volleyball team lost 3–0 last Thursday, March 27 against No. 4 Cal State Long Beach before falling again in a tough 3–2 match versus Cal State Northridge on Saturday. The pair of home losses puts the Tritons at 2–20 overall and 1–19 in the Mountain Pacific Sports Federation.

The Tritons were the clear underdogs against nationally ranked powerhouse Cal State Long Beach and were swept in three largely uncontested sets.

The 49ers came out of the gate hot, converting on 71 percent of their hits to take an imposing 15–5 lead in the first set. In their first game back from a two week break, the Tritons started the game sluggishly, hitting an inefficient seven kills and nine errors on 26 attempts. The game ended on a score of 25–11.

“Even though we had three days of practices, you can tell we weren’t in match mode,” UCSD head coach Kevin Ring said. “We’re off for finals week, and that’s just the nature of how our season maps out with the quarter. That’s on us to come out and be better prepared right from the start.”

The second game finished in similar results with the final score of 24–13.

The Tritons’ only lead of the match came from a kill by sophomore outside hitter Kirill Rudenko to start off the third set. However, Cal State Long Beach would take control for the rest of the match, winning 25–15.

After a one day break, the Tritons next hosted Cal State Northridge on Saturday in a hard-fought loss to the Matadors. Senior outside hitter Nick Iorfino returned to the court after over a month-long absence and contributed a match-high 18 kills.

UCSD opened the match with little energy, as the Matadors took an early 4–0 lead and ultimately overran the Tritons throughout the set to win 25–14.

However, the Tritons bounced back quickly, taking the next two sets by scores of 25–19 and 25–22. UCSD largely controlled an early lead in the second set and held on for a victory in the third set despite Cal State Northridge’s late comeback attempt.

In spite of the 2–1 set lead, the tide shifted in the Matadors’ favor in the fourth set. The Tritons held a commanding 10–4 lead until Cal State Northridge shifted the momentum with a 13–4 run that included three straight service aces.

The Matadors would hold on to their slim lead to knot up the match at 2–2.

“[There was] a still fair amount of game left, but [we were] in a nice position, and we quickly gave that lead away,” Ring said.

In the fifth set, UCSD kept Cal State Northridge within close reach, with the final contest containing three lead changes and five tie scores. However, the Tritons ultimately failed to close out the set in a 15–12 loss.

“We’re disappointed,” Ring said. “It hurts to lose this one because we put a lot into it, and we were there to win it. I’m proud of their effort.”

UCSD will look to end their three-game losing slide as it next hosts No. 7 UC Irvine on Friday, April 4 and UC Merced on Saturday, April 5. Both games will begin at 7 p.m.