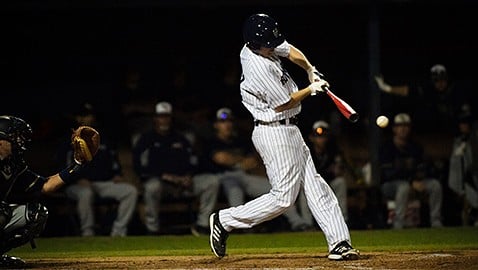 The Tritons (7-5) split a four-game series against the previously undefeated, CCAA-leading Mustangs

The Tritons handed No. 15 Cal Poly Pomona its first two losses of the year in a 2–2 series split this past weekend. Previously undefeated, Pomona lost the first game to UCSD on its home field before the second game of the series ran to 11 innings and was suspended due to darkness. UCSD returned to Triton Ballpark on Saturday to resume play, dropping the suspended game to Pomona and winning one in the afternoon doubleheader.

In the bottom of the first inning, sophomore right-hander Justin Donatella took the mound for UCSD, allowing only two runs on four hits and three walks, while retiring 11 straight batters from the second frame to the sixth. Junior catcher Brett Levy threw out a potential steal for the first time in the 2014 campaign in the first inning. The Triton defense also turned two double plays to take the 4–2 win in the low-scoring game.

The second game of the series was suspended due to darkness after UCSD lost a four-run lead after two RBI performances from sophomore third baseman Troy Cruz and senior leftfielder Justin Rahn, leaving the game tied 7–7 in the 10th inning. Play ended at Triton Ballpark the following day after Cal Poly’s Trevor Magno hit a walk-off RBI single in the bottom of the 11th inning for an 8–7 Cal Poly win.

Junior southpaw Trevor Scott took the mound for the Tritons in the third game of the series and retired batters in separate eight and 12 streaks.
Scott initiated a crucial around-the-bases triple play in the ninth after a Bronco single to maintain the Triton 3–4 lead. Just after, CPP managed a two-run single to give the Broncos a 5–4 advantage going into the bottom half.

The Tritons capitalized on a series of walks to load the bases with no outs. A fly from Rahn to right field set up a Broncos double play, but UCSD advanced a runner to third in the play to set up a steal for the tying run. Cruz, now on first, broke for second and drew the throw while sophomore outfielder Gradeigh Sanchez stole home for the tying score.

A few pitches later, the Tritons sent the winning run home after a walk-off single to center for a 6–5 final score.

UCSD was defeated 6–4 in the final game of the series, after the Tritons allowed a 4–1 lead slip away in the seventh. Cruz (1–1) was credited with the loss after allowing five runs on six hits across six frames for his second start on the mound in 2014.

After coming out even with the CCAA’s top contender at the moment, it is hard to accept such close losses that could have been tallied in the win column. A failure to capitalize on opportunities late in games caused the Tritons to split a crucial in-conference series, despite having built momentum on their early season success.

“I don’t question our toughness,” UCSD head coach Eric Newman said to UCSD Athletics Department last Saturday, Feb. 22. “Our guys came out, and they competed. I mean, this was a grind-it-out series for both teams.”

UCSD continues CCAA action on Friday, Feb. 28 against Sonoma State in a four-game series at Triton Ballpark. The Tritons will come off what could have been an in-conference sweep and attempt to break .500 in the CCAA for the first time in the young 2014 season.

“I think we’re a force to be reckoned with,” Newman told UCSD Athletics Department. “I think it stings, it should sting, and we need to respond.”