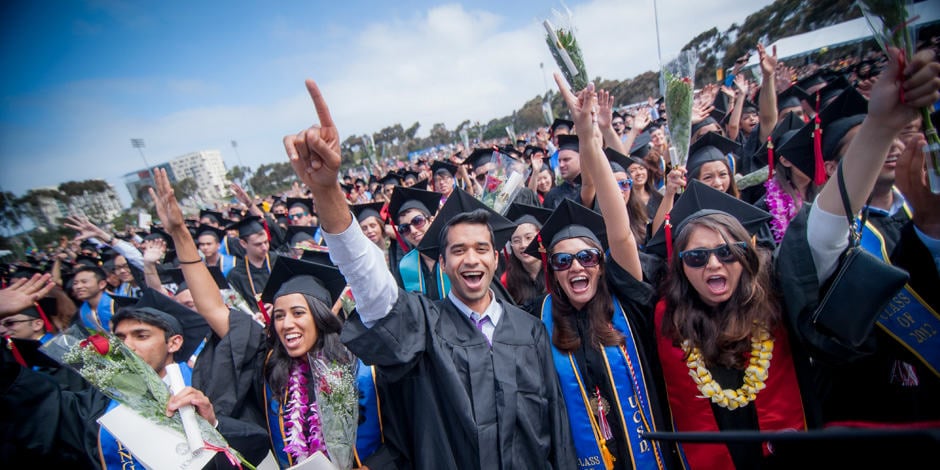 I want to start off by saying something that might be strange, but it’s something I know I’ll be saying a lot in the near future, and that is:

Whew! That felt good. You know, people (the smart ones) were right when they said you should just go out and get things off your chest, because it does make you feel better. People (still the smart ones) were also right when they said that goodbye never gets easier; that even if hate is the introductory emotion to something, then by some cruel twist of existence, things get more enjoyable, or more bearable, as time goes on. Sentiments are cultivated in your brain. And then goodbyes become difficult.

I didn’t start out liking UCSD. I wanted to go to a small, hip liberal arts college in Washington — or, as I saw it, Coolsville, USA. I was prepared to say farewell to my lifetime home and go to a place that probably didn’t even have Takis™ given its considerable distance from the border of Mexico.

But because of budgetary concerns and familial pressure, I opted for what angry teen-me called UC So Dumb, which I was not okay with. But slowly, the idea became tolerable: I realized I could walk to the beach, that one of my best friends would also be there and that I would probably not be the nerdiest kid at a research university (my enormous sense of self-doubt prevents me from giving my coolness even the smallest shred of plausibility) (not to brag). I even got kind of into UCSD at orientation, save for the amount of time they allotted to rehearse synchronized jazz hands for UnOlympics. (Disclaimer: I enjoy and am skilled at jazz-handing, but I see it as more of an independent activity)

Then I started taking classes, enjoying my major, making friends, joining clubs, taking naps in lounges and buying coffee from the cool Mandeville coffee cart, and sentiments grew like weeds in my mind, and before I knew it, I was getting emails about “taking senior portraits” and “applying to graduation” and “enlargeing my bratworst.” I realized that I would miss this bundle of buildings established as an institution of higher education. I knew then that saying goodbye, even to the beachfront retiree community of La Jolla, would be hard. I also suspected that the day before graduation would be spent visiting various cherished campus spots, crying and singing Vitamin C’s seminal hit “Graduation (Friends Forever).”

If four years of seeing some of the closest friends come and go has taught me anything, it’s that saying goodbye is best done deliberately and farewell-induced regret can be minimized by giving that person or thing the sendoff you think they deserve (ice cream and sitcoms help, too). There’s no grand ritual for saying goodbye, just making sure that you do the things you’ve always wanted to with them.

Admittedly, this column is extremely self-indulgent, as saying “goodbye” has never been easy, especially for someone who tears up at the Sarah McLachlan-accompanied montage that plays in his head when he throws old sneakers away. But writing through these feelings will help me (and hopefully readers like you) to work through the transition from student-hood to young adulthood. And because of some fumbled contract writing, I will be required to plug Takis™ brand snacks in every column.

So, class of 2014, get ready. Take my hand, and we’ll journey toward life together. I’m sorry that my palms are covered in delicious Takis™ seasoning.